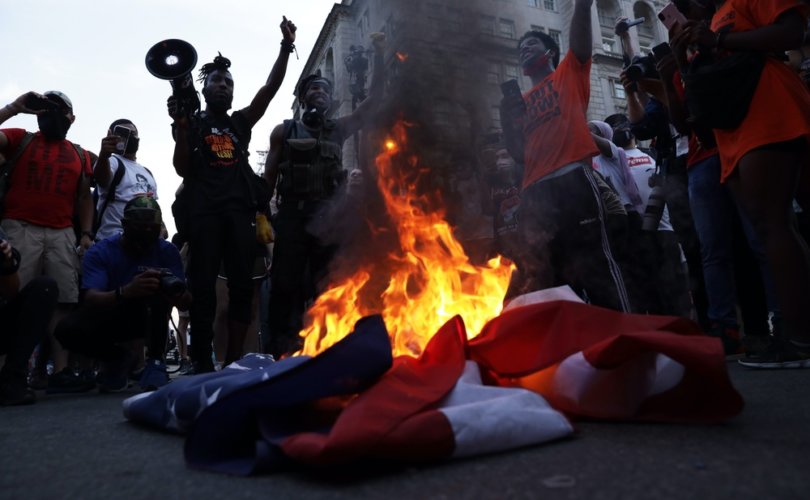 (American Thinker) – Since the founding of the nation there has been a consensus that the demise of the United States would not come about by being conquered from without but rather by destroying itself from within. That consensus about the first-of-a-kind constitutional republic with no history of either monarchical or dictatorial authoritarianism is rapidly becoming a reality. How did this evolutionary process come to pass, and can it be stopped?

The founders of the United States were well aware that the sins of pride, selfishness, avarice and contention in human nature begin to manifest themselves over time in virtually every society. And that these characteristics are overwhelmingly prevalent among a small but dominant sector of every society predisposed to subjugate and control their fellow man. Thus, the founders’ overriding motivation in drafting the Constitution was to mitigate as much as humanly possible the inevitability of a despotic faction attempting to assume unilateral and permanent power.

Nonetheless, over the past half-century a miniscule subset of the American citizenry has nearly achieved unilateral and permanent power in a nation with a multi-century history of freedom and liberty and an unprecedented 75-year period of unparalleled security and prosperity. This subset of the citizenry, the American left, has done so by manipulating and exploiting a unique idealistic trait in the American character that has manifested itself, either out of guilt, boredom or narcissism, during this same 75-year period.

This unique American trait is a need among far too many in each succeeding generation to achieve relevance by dogmatically and single-mindedly promoting what they perceive to be a society-changing or mankind-rescuing cause. Many of these single-minded dupes are so focused on their individual causes that they do not care what else the left promotes. They ignore or dismiss the fact that once the left takes over a cause, they inevitably produce chaos and abandonment of the original intent of the movement.

The left appropriates these causes by utilizing a three-step tactic. 1) They overtly lie to the true believers by claiming they are also irrevocably committed the cause at hand. 2) They then hijack what begins as a justifiable movement and launches the surreptitious placement of their fellow-travelers in leadership. 3) They then begin a campaign of demagoguery and organize militant marches and protests ostensibly on behalf of the cause but, in reality, to intimidate the overall citizenry.

When combined with their domination of social media and its unprecedented and massive reach, less than a quarter of the population wields an inordinate amount of influence in politics and an extraordinary ability to intimidate much of a largely apathetic American society. As a result, the left now dominates virtually all of the nation’s institutions (incl. the Democrat party) and has imposed an alliance of convenience with the ruling class, as the elites are more concerned about preserving their societal status than the welfare of the nation.

This template for this process began with the unquestionably necessary Civil Rights Movement of the 1950-60’s which was followed by “save the planet” idealism, followed by the gay rights crusades, and most recently the so-called transgender rights campaign.

The original objectives of the Civil Rights Movement and the soaring rhetoric of Martin Luther King, Jr. in August of 1963 awakened nearly every American.  Thereafter, citizens of all races and creeds joined in the battle to permanently erase the stain of institutional racism from American society. Within less than 18 months, legislation was passed protecting the voting and civil rights of all citizens regardless of race, ethnicity or creed.

However, in the mid-to-late 1960’s much of the Civil Rights Movement was hijacked by the radical left and their Marxist allies in black militant groups in order to legitimize and mainstream their anti-American Marxist movement. They did so by infiltrating the leadership and organizing demonstrations and militant marches. Both factions espoused the overthrow of American society using supposed irredeemable American racism as the primary tool of revolution. They soon realized the power of the racism accusation in a society determined to rid itself of the stain of institutional racism. A plurality of the citizenry unwilling to condemn their tactics due to manufactured guilt for the past paved their path to power.

It became clear to the radical left that revolution in the United States would not be accomplished by the centuries-old tactic of class warfare but in unending racial politics. That’s why they unceasingly instigated racial animosity, a tactic eventually given governmental imprimatur by Barack Obama. The result: a society torn asunder by never-ending racial demagoguery.

What began as a justifiable and necessary movement was manipulated into a weapon of revolution and dissonance empowering the Marxist left. A lesson not lost on the radical left.

The same process was repeated when “global warming” and later redefined as “climate change” reared its head. Al Gore used the irresistible hypothesis that there could be no greater meaning in life than saving the planet. Soon many idealists looking for relevance mindlessly joined the movement premised on theory that an atmospheric trace gas, CO2, functioned as the thermostat for the planet’s temperature.

However, within a very short time the radical left took over the leadership of the cause. They quickly recast the crusade into one focused on eliminating all fossil fuels which would effectively destroy capitalism and foment global poverty, thus making it considerably easier to seize unilateral and permanent power. Meanwhile, the oblivious single-minded true believers continue to wallow in cluelessness.

In an attempt to relive the early success of the Civil Rights Movement, gay rights were brought to the fore in the United States in the 1980-90’s. While there were overtly discriminatory laws that needed to be changed and societal status normalized, the cause was soon hijacked by the left and effectively recast as anti-Christian evangelism. Since the accusation of racism was so successful in intimidating the citizenry, a new term was coined: homophobia

In demanding equal marital status, they effectively began the war against the nuclear family. The purging of Christianity and Judaism from the public square and the elimination of the family have always been major tenets of the radical Marxists. By wrapping the cause in the cloak of the civil rights movement, far too many obliviously and willingly fell into the trap set by the left.

Then, the radical left, again using the Civil Rights Movement as the backdrop, decided to create the latest incarnation of a so-called civil rights crusade: the mainstreaming of a phenomenon hitherto regarded as a mental disorder, gender dysphoria. And sticking with the overwhelmingly effective blueprint, another intimidation epithet to go along with racism and homophobia was devised: transphobia.

There was no initial redeeming aspect of the transgender movement, as it was concocted to draw in another gullible generation seeking relevance and meaning in their vapid lives. Beyond producing another group of credulous halfwits, it further advances the destruction of the family and the Judeo-Christian underpinning of the nation while dismantling what was once a cohesive American society. Its adherents promulgate the mutilation of willfully confused children on the altar of Marxism.

If the United States is to stop the march to self-destruction, then the vast majority of Americans who do not identify with the left need to wake up and understand that the American left is not an unstoppable monolithic leviathan crushing everyone in its path. It is a loose amalgamation of various disparate and captive groups of ill-educated, attention-seeking and insecure single-issue dupes being manipulated by the relatively few Marxist true-believers. And as such, the left can be defeated.

The path to defeat the American left and the ruling class is to 1) expose and split away their captive groups and 2) turnout in massive numbers at election time. That process begins by understanding that these captive groups are powerless, credulous and clueless. Then unhesitatingly begin to ignore their incessant rants, name-calling and unenforceable threats, followed-up immediately by mocking them unmercifully on social media and in the conservative media for their inability to reason or generate an original thought, as well as being useful idiots for the Marxist left. Finally, in 2022 and 2024, do not vote for anyone running as a Democrat regardless of the office.