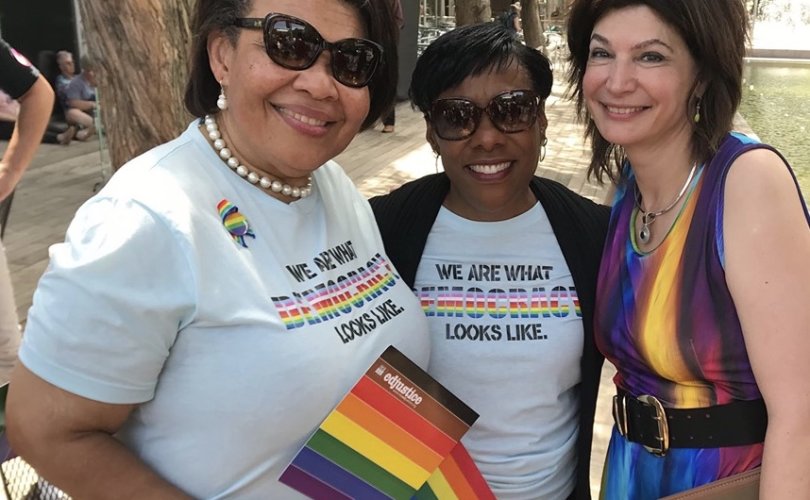 And they are making it official.

Remember, these are the folks running the nation’s public schools. If we wonder why the left seems nuts, here’s one big reason. The mighty, misguided teachers’ union is prepping clueless young extremists and churning them out in your neighborhood schools every day.

And this all happened as the union celebrated “Stonewall” and hundreds of “LGBTQ” delegates partied to the obscene entertainment of near-naked “drag queens” while children who had been brought to this event watched.

NEA supports the care and feeding of false “gay” narratives and inaccurate pronouns, but not infants. Grammar denial is critical, but so is life denial.

The NEA apparently wants America to go down and they are doing their best to help that process along.

Among the actions taken at the NEA 2019 Representative Assembly are these new business items:

Many other proposed new business items were defeated, some of them even more revolutionary. Several called for the impeachment of President Trump. One called for supporting the Palestinian Authority against the alleged actions of “apartheid” by the nation of Israel.

And another proposal to investigate the incorporation of “mindfulness” in classrooms was “referred to the appropriate committee,” which means it is being considered. Mindfulness is an occult spiritual practice, the newer term for transcendental meditation.

So how to describe this group? Not just pathologically immoral, unconscionable supporters of baby murder and other human rights abuses (while claiming the opposite). The NEA is radically anti-American and in fact, a danger to American security.

Will they enable or encourage teachers to shield sex traffickers – or hide their underage victims, who are illegal aliens?

Or terrorists? If anyone can walk across our border with the blessing of the NEA, that’s exactly who will take advantage of this “educational” group’s deeply ignorant and reckless policies.

Praise God these people are not running Congress. Or are they?

The NEA donates millions to Democrat candidates (almost exclusively) and liberal causes. So they put muscle behind this evil, and it’s not a pretty picture.

It’s time to do something about the NEA other than just pull kids out in preference for Christian or charter schools, or home schooling.

It’s time to take action before this group destroys our country. When people like Rush Limbaugh speculate about why the left seems to be insane, one major influence is this extremist group. The NEA pulls major strings in the Democratic Party and like organized crime mobs run an intimidation game in “local” education.

They seek out the most unhinged, robotically immoral people in the teaching profession and encourage them to become local representatives and delegates, who willingly pass unconscionable policies — and spread poison about any teachers who won’t toe the line.

Then these people are empowered by the national union’s money and influence to run an intimidation game at the local level to prevent conservative voices from having a say in the union — or even most of the time, in their schools.

Just ask Rebecca Friedrichs, who wrote the book Standing Up to Goliath: Battling State and National Teachers’ Unions for the Heart and Soul of Our Kids and Country. She was the lead plaintiff in the Friedrichs v. CTA Supreme Court case, and a subsequent case freed all public sector employees from forced unionism.

Friedrichs started an organization, For Kids & Country, to help educators exit the unions and deal with their intimidation tactics.

Any educator with ethics needs to drop this union — now. If you are reading this, you still have a brain and you still listen to some degree of common sense. So I implore you, stop enabling and cooperating with evil.

Our country is endangered by these idiots.