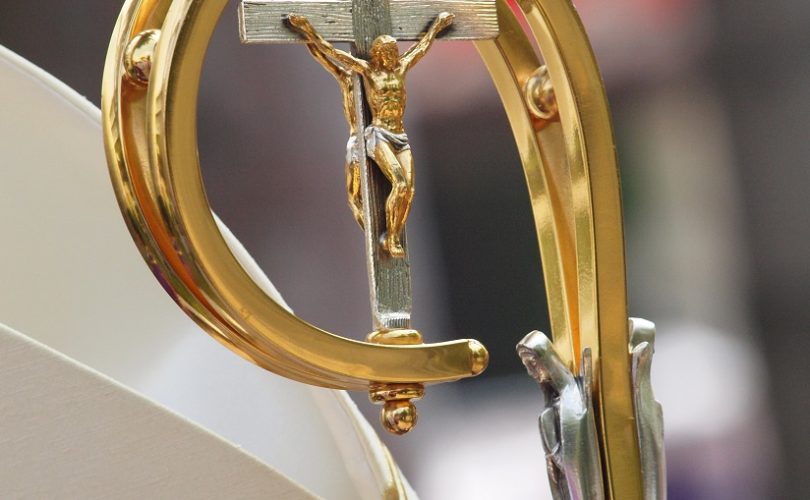 August 7, 2018 (LifeSiteNews) – Trust is the foundation for loving relationships and is essential, for example, for the stability and health of marriages.  As I relate regularly in my work as a psychiatrist with married couples, there is benefit in putting the struggle with trust in a spiritual-psychological perspective that goes back to the first human couple, Adam and Eve.

Eve was tempted by the snake not to trust God the Father and she gave into mistrust.  Adam’s major psychological mistake was that of failing to correct his wife and tell her that they would continue to trust the Father and His plan for their lives.

In 1968 another event occurred in the release of Humanae Vitae that resulted in a similar decision, in perhaps the majority of bishops, priests and laity in the world, not to trust in God the Father’s plan for human sexuality and marriage.  The consequences have been disastrous to the sacraments of Holy Orders and, marriage.  Epidemics of narcissism, divorce, out of wedlock births, fatherless youth, sexually transmitted diseases, pornography and the clerical homosexual abuse of adolescent males and seminarians, as well as infidelity to vows quickly followed.

People must know that bishops and priests are totally committed to the fullness of Catholic truth on matters of sexual morality, a truth as essential to the renewal of the priesthood and the episcopate as it is to the renewal of marriage and family life.

This advice was never implemented.

The present international crisis of homosexually aggressive behavior by bishops and priests in the Church makes it abundantly clear that this essential teaching has been rejected by large numbers of priests and religious.  In addition, what is most troubling is that members of the Hierarchy appointed by Pope Francis in the Vatican and in the United States are actively involved in undermining the teaching of the Church on sexual morality, particularly homosexuality and marriage.

Further, it is almost inconceivable to see that these members of the Hierarchy and priesthood are deeply involved in promoting LGBT ideology at the World Meeting of Families and the Synod on Youth.  Their role markedly impairs the ability of laity, who has recently been severely traumatized by the McCarrick, Honduran and Chilean scandals, to trust in the Holy Father and in these meetings.

The importance of teaching the Church’s truth on sexual morality and homosexuality has never been as needed as it is today.  Such teaching is essential to the restoration of trust by the laity in the Hierarchy and the priesthood.

Over thirty years ago a non-Catholic sexual partner of a priest in one diocese identified to the Vicar for Clergy the names of many priests in that diocese who were involved in the homosexual lifestyle. The bishop arranged for the Rev. John Harvey, O.S.F.S., the founder of Courage — the only international program in the Church for those with same-sex attraction that is loyal to Church’s teaching — and me to give two mandatory one-day conferences.

Today, such mandatory conferences are greatly needed for all the hierarchy in the United States, for priests in all dioceses and religious communities, for staffs of bishops’ offices and for seminarians.

Such conferences should also be required of the Hierarchy and staff serving in the Vatican.

After such conferences, bishops should be required to write to all the priests in their diocese annually in support of the Church’s teaching on sexual morality and Humanae Vitae with the requirement that it be read at Sunday Masses.  The priests in the diocese should be informed that they are expected to end their silence and preach regularly on sexual morality and chastity.

Bishops should communicate that those priests and seminarians with same-sex attractions (SSA) are expected to address those attractions in spiritual direction and in consultation with Courage. (www.couragerc.net). Bishops with SSA should do likewise.

While priests often preach on matters related to the love of God and of neighbor, the sixth and the ninth commandments — 20% of the commandments — are almost never taught.

Furthermore, the bishop should be required to read this letter yearly to a new organization comprised of bishops and laity that is dedicated to protecting the Church from sexual heresy and abuse.  The laity should be essential members of such an oversight, as it is clear that the bishops by themselves have been unable to address the problem.

If a bishop fails in his mission to teach the truth and to be a spiritual father to his priests and the laity, he should be warned by the pope that he risks being removed from his diocese.

Bishops who presently are trying to remove from ministry spiritually and psychologically healthy priests who are loyal to the Church’s teaching on sexual morality should also be warned to cease their hostile behaviors or be removed.

Priests who fail to read and to preach on the bishop’s annual letter on sexual morality should be strongly corrected. Required programs should also be developed for priests on understanding the origins of sexual conflicts and on preaching the liberating truth about marriage and sexual morality as described in Humanae Vitae and Familiaris Consortio.

Benefits to Bishops and Priests

Such preaching would configure bishops and priests more closely to Christ, help them to offer up their gift of sexuality more fully to Him, strengthen their spiritual and psychological health by building their confidence, make them less vulnerable to sexual temptations, and lead to less fear in preaching the countercultural truth about sexual morality and marriage.

End Programs hostile to the Truth

Again, for reasons that are incomprehensible, one Pope-Francis-appointed bishop has endorsed the pro-LGBT New Way Ministry that undermines Church teaching on homosexuality and, for this reason, was censured by Pope John Paul II.

Cardinal Sarah has strongly criticized in the Wall Street Journal a high-ranking priest — who is a consultant to the Vatican’s Secretariat for Communications — for his pro-LGBT book that undermines Church teaching on homosexuality.

With all due respect, clergy that support sexual heresy damage the ability of the Church to respond to the crisis in the Church caused by the homosexual abuse of adolescents, seminarians, and adults by members of the Hierarchy and priests.

Psychological Obstacles to Preaching the Truth

Most Catholics have never heard a homily that explains the importance of Humanae Vitae for marriage, family life, youth, and the priesthood and the severe spiritual, psychological, medical and cultural harm that ignoring its teaching has caused. The major reasons for this severe negligence in spiritual fatherhood in members of the Hierarchy and priests is lack of confidence on a human level and in the Holy Spirit, as well as fear of rejection by brother priests and bishops. And there is selfishness as well, that prevents sacrificial self-giving, that is, it’s simply too hard to do.

Growth in a number of virtues can strengthen priests in their vocation to protect the sheep and themselves.  These include courage, gratitude for one’s personal and spiritual gifts, more trust in God with one’s ministry, as well as forgiveness of those in the hierarchy and priesthood who have damaged the Church by being hostile to Humanae Vitae and its teaching of self-denial and generosity.

The betrayal pain of sadness, intense anger, and mistrust experienced by the laity and loyal priests and Bishops toward Archbishop McCarrick is similar to that experienced by the children of divorce who have been abandoned by narcissistic fathers. The psychological reality is that the first step in the healing process of forgiving him and his supporters in the United States and the Vatican is for many not humanly possible.

In two American Psychological Association textbooks that I have co-authored on treating excessive anger, forgiveness is described as occurring in one of three ways.  These are cognitively by a decision to do so, emotionally when one truly feels like forgiving, and spiritually when one is unable to forgive with one’s mind or heart and gives the anger to the Lord.  At the present time for most Catholics, the most effective method of addressing this betrayal of Christ and His Church is spiritual forgiveness on a daily basis.

Forgiving those in the Hierarchy, priesthood, and laity who knew of McCarrick’s behaviors and enabled them for decades by their silence is important in the healing process.

The laity should ask their pastors to end their silence on preaching the truth about sexual morality and chastity.  They should challenge them to be spiritual fathers/shepherds who follow the Lord and not the culture and who are willing to lay down their lives to protect the sheep.

If the pastor expresses passive-aggressive anger by refusing to teach the truth on marriage, sexual morality, and particularly homosexuality, fornication, and adultery, parishioners should inform him that they will no longer be contributing to the parish until he does so.

There is every reason to be hopeful that the Lord will take us through this very difficult time in the Church in which sexual heresy has been allowed to fester, grow and be enabled for the past fifty years.

The active role of laity is essential in this process to protect the Church from a repetition of the cover-up in the Dallas Charter and in the post-crisis programs.  They failed to identify the role of the failure to teach sexual morality in the crisis and tried to focus on pedophilia, when in fact, the homosexual predation of adolescent males, the primary victims, was the major focus of the abuse.

Unless sexual morality and Humanae Vitae are taught, trust in bishops and in priests cannot be restored.  Any member of the hierarchy or priesthood who won’t engage in such teaching is not trustworthy, because he shows he doesn’t love the Church’s perennial teaching that undergirds such trust.

Editor's note: Rick Fitzgibbons, M.D., is a member of the John Paul II Academy for Human Life and Family,  has taught at the John Paul II Institute for Studies on Marriage and Family at Catholic University of America and has served as a consultant to the Congregation for Clergy at the Vatican. He is the co-author of Forgiveness Therapy: An Empirical Guide for Resolving Anger and Restoring Hope, APA Books, 2014. His forthcoming book on strengthening Catholic marriages will be published in the Spring by Ignatius Press.