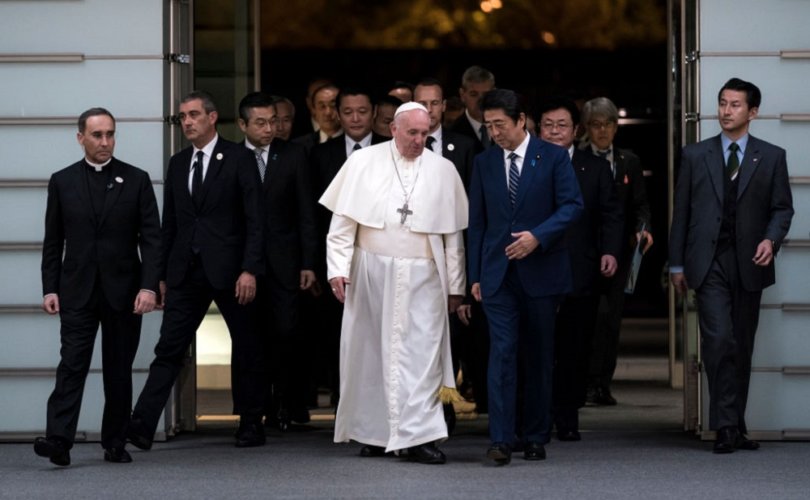 November 25, 2019 (The Catholic Thing) — “In your hearts honor Christ the Lord as holy, always being prepared to make a defense to anyone who asks you for a reason for the hope that is in you; yet do it with gentleness and respect.” (1 Peter 3:15) This clearly means that one way in which we honor Christ as Lord is by persuasively defending the truth of the faith, by giving reasons supporting faith's rationality and truthfulness.

This defense is crucial because the response to the Gospel should be reasonable. Indeed, Vatican I's Dogmatic Constitution, Dei Filius (1870), affirms that the assent of faith is reasonable, such that this “assent is not a blind movement of the intellect; nevertheless, no one can 'assent to the preaching of the Gospel', as he must to attain salvation, 'without the illumination and inspiration of the Holy Spirit, who gives to all a sweetness in consenting to and believing in truth'.”

What do we make, then, of Pope Francis's constant insistence, recently repeated here, and in his meeting with the bishops of Japan this past Saturday, that in an evangelical encounter with those who do not know Christ we must witness to Christ but “not with convictions, not to convince [or persuade], [and] not to proselytize”?

I have always found this claim idiosyncratic, not to say inconsistent with the Catholic tradition's emphasis on the interdependency of faith and reason (from Leo XIII's 1879 encyclical Aeterni Patris to John Paul II's 1998 encyclical Fides et Ratio). Inexplicably, Francis thinks that evangelical witness excludes not only the power of persuasion, reason, and arguments, but also claiming that one asserts, affirms, and holds certain beliefs to be true.

How can we approach the unbeliever without convictions? Faith involves both the fides qua creditur (“the faith with which one believes”) and the fides quae creditur “the faith which one believes”). Therefore, in bearing witness to the Gospel of Jesus Christ, we evangelize with the beliefs we hold to be true, and these beliefs are constitutive of the message of the Gospel.

Other examples of truths that are asserted and held to be true in the evangelical encounter may be taken from First Timothy: “Christ Jesus came into the world to save sinners” (1:15). “God our Savior … desires all men to be saved and to come to the knowledge of the truth” (2:3–4). “For there is one God, and there is one mediator between God and men, the man Christ Jesus” (2:5).

Thus, a “personal encounter” with Christ involves a constitutive relation with beliefs, involving an assent of the mind to their truth, beliefs that we come to hold to be true.

Thus, there is no personal encounter with Jesus Christ that does not include certain beliefs about Him. Of course, how truth is authenticated — i.e., lived out, practiced, carried out — our lives cannot be reduced to being merely believed, asserted, and claimed. Benedict XVI understood this point very well in his 2013 Encyclical Lumen Fidei (§45).

Although Pope Francis signed on to this encyclical with his own contribution, clearly — unlike Benedict — his view sets up an opposition between the truth that is to be lived out, practiced, carried out, on the one hand, and the truth that is to be believed, asserted, and claimed on the other. Francis seems to think according to a scheme wherein faith begins with the personal encounter with Christ and subsequently, as a secondary matter, ends with beliefs, convictions.

Francis's view is not that of the Catechism of the Catholic Church, however, where doctrinal beliefs are the actual content of the encounter: “Faith is first of all a personal adherence of man to God. At the same time, and inseparably, it is a free assent to the whole truth that God has revealed.” (§150) It is also not the view of John Paul II in Veritatis Splendor. Regarding the question of how truth is authenticated as existential truth, John Paul correctly notes, that it is not merely about propositional truth, but also how this truth is borne out in life.

It is urgent to rediscover and to set forth once more the authentic reality of the Christian faith, which is not simply a set of propositions to be accepted with intellectual assent. Rather, faith is a lived knowledge of Christ, a living remembrance of his commandments, and a truth to be lived out. … Faith is a decision involving one's whole existence. It is an encounter, a dialogue, a communion of love and of life between the believer and Jesus Christ, the Way, and the Truth, and the Life (cf. Jn 14:6). It entails an act of trusting abandonment to Christ, which enables us to live as he lived (cf. Gal 2:20), in profound love of God and of our brothers and sisters. Faith also possesses a moral content. It gives rise to and calls for a consistent life commitment; it entails and brings to perfection the acceptance and observance of God's commandments. (§88)

Lastly, absent in Francis's view is the truth-oriented dynamic of evangelical encounter. As Vatican II put it, man is ordered by “his nature to seek the truth, especially religious truth.” He is also “bound to adhere to the truth, once it is known, and to order [his] whole life in accord with the demands of truth.” (Dignitatis Humanae §2)

This absence of the epistemic justification and truth of Christian beliefs is particularly evident in Francis's view of the “dialogue” of religions. His view not only creates confusion, but runs the risk of degenerating into outright religious indifferentism.