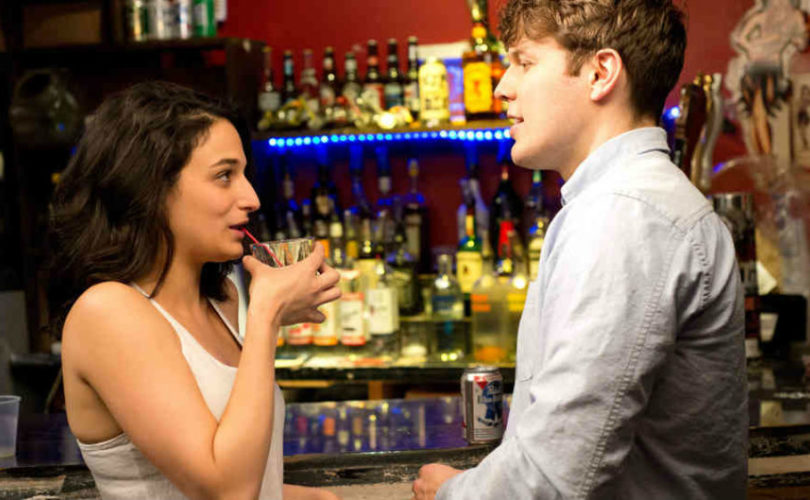 The makers of the new movie “Obvious Child,” which opens today, deliberately set out to make something new: a romantic comedy involving abortion.

Director Gillian Robespierre told the New York Times that she’d had her fill of movies like “Juno” where a young woman considers abortion but then decides to have her baby. The star of “Obvious Child,” Jenny Slate, added: “A woman who is not ready to have a baby but has one anyway is not a happy ending to me. It’s a personal nightmare.” They both wanted to make a different kind of movie—a movie that, in Robespierre’s words, would “feel true” to them.

So “Obvious Child” presents the character of Donna, a young stand-up comedian obsessed with bathroom humor, who finds herself pregnant after a drunken one-night stand with a stranger named Max.

If that’s not a recipe for a fun romantic comedy, I don’t know what is.

Well, Max shows up again, interested in pursuing a real relationship. But Donna has already scheduled the abortion, having shown zero interest in the other options the doctor offered to discuss with her. Now, as she slowly discovers what a kind, thoughtful, fun guy her one-night stand really is—yes, I know, only in the movies!—Donna grapples with whether she should tell him what’s going on.

It’s worth noting what doesn’t happen. Donna never seems to think deeply about what, or whom, she’s going to abort.

The only reason she gives for wanting an abortion is that she’s just not ready to be a mom. And no one ever tries to talk her out of it. Her roommate offers tips based on her own abortion experience; and her mother reveals that she too once had an abortion. An entire comedy club audience even offers sympathetic and supportive laughter when Donna does a stand-up routine about her plan to abort.

This, by the way, is how her new boyfriend first finds out about the pregnancy. He walks out of the club—but then he shows up the next morning with flowers and an apology, goes with Donna to the clinic, and settles in with her afterwards for a movie on the couch. No, I’m not making that up.

I’ll grant you that many of our romantic comedy tropes are overused and stale. But I’m not quite sure we’re ready to replace them with flowers at the abortion clinic.

But the point is, the movie portrays the society that some pro-choicers would love to live in: where abortion is a matter-of-fact, no-second-thoughts procedure, and dissent simply does not exist.

This means it will probably strike a chord with many women who’d rather not think too hard about their own abortions. It’s ironic that a movie that’s being praised by many critics for its depiction of women supposedly being bold and smart and making their own choices, is simultaneously showing women refusing to think about what they’re doing.

Reviewer J. R. Jones of the Chicago Reader nailed it when he suggested that “the filmmakers are scared to death of their own story.” The sad truth is, abortion is far too painful to be handled with a joke, a bouquet, and a classic movie night on the couch.

And both the statistics and the anecdotal evidence tell us that most women are well aware of this. Websites like Hope after Abortion and Abortion Changes You, for instance, are full of testimonies from women struggling with guilt and grief over their very real losses. If Donna were a real person, her story would be far more complex, serious, and three-dimensional than this film that tries to convey a false sense of nonchalance.

Abortion represents many things to many people. But one thing is for sure: The new “abortion comedy” notwithstanding, it’s no laughing matter.

If you know somebody struggling in the aftermath of an abortion, please come to BreakPoint.org, click on this commentary, and we’ll link you to organizations that can help.