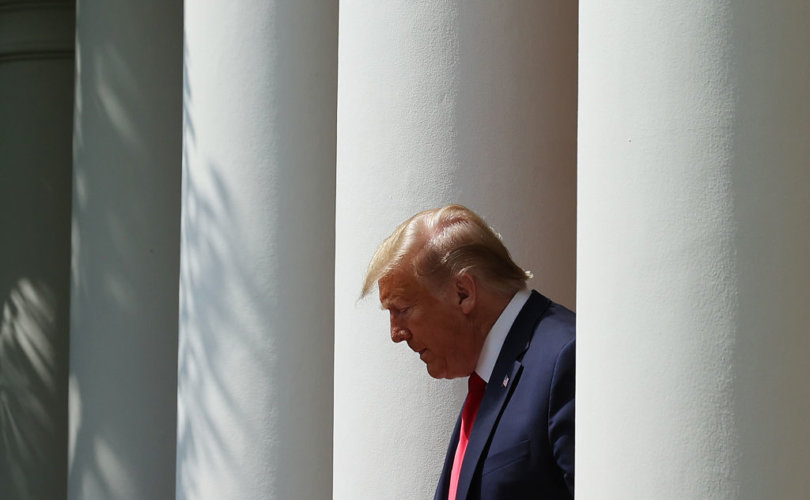 June 16, 2020 (LifeSiteNews) – There is a troubling pattern that is being repeated over the course of President Trump’s administration.  First, anonymous allegations of inappropriate behavior by some pro-life member of President Trump’s administration are leaked by a handful of leftist foreign policy publications. The articles cite a generalized sense that career officials’ safe space in the executive agencies has been violated. The allegations are quickly followed by calls for investigations by a handful of the most corrupt leftist congressmen.  The congressmen call the inspector generals to target the pro-lifers and the press further reports the allegations as fact, making the job of the pro-life Trump appointees impossible, essentially forcing their resignation.

It has happened with the Secretary of Health and Human Services, multiple highly competent officials in the Department of State, and now it is happening at The United States Agency for International Development (USAID).  The formula is always the same.  The victims always fit the same profile, the informants are almost always anonymous and the inquisitors in congress and the press are the same.

If the political adage that personnel is policy is true, then it is clear that the vicious attacks on President Trump’s political appointments are really an attack on the policy preferences of the president and on the democratic system of governance itself.

Last year, I reported on the forced resignation of Mari Stull, a no-nonsense conservative and senior advisor in the State Department.  Ms. Stull had been incredibly effective in promoting the president's America First international foreign policy.  She had also insisted on stopping the blatant promotion of abortion as a foreign policy objective; something the Obama administration had encouraged throughout the agency.

Ms. Stull was eventually forced to resign through a coordinated campaign that started with unverifiable anonymous leaks carried in the leftist international affairs media.  Those accusations led to a weaponized inspector general report and partisan congressional threats of subpoenas.  All of this with unrelenting negative media coverage of Ms. Stull.

Escalation of the purges by the deep state

Only half a year after Ms. Stull was unceremoniously purged, her immediate supervisor, a combat-decorated Vietnam war hero and experienced diplomat, Ambassador Kevin Moley, was also forced to resign.  Ambassador Moley's great crime was that he had continued Ms. Stull's faithful implementation of the president's agenda, curtailing communist China's influence over international organizations, executing the withdrawal of the US from the corrupt and inept UN Human Rights Council, and defunding the abortion promoting UNESCO.  For more detailed information on the firing of Ambassador Moley, I highly recommend reading the excellent article written by Susan Yoshihara at C-Fam.  Suffice it to say that the victim of the purge, the reason for the purge and the way of effecting the purge were all essentially the same.  The forced resignation of Mari Stull had provided an effective formula for the Deep State and after Ms. Stull, they went up the food chain to Ambassador Moley.

The big dogs bite back

Emboldened by their success with Ms. Stull and Ambassador Moley, the Deep State decided to use the same formula to go after the biggest of Trump’s big dogs, Secretary of State Mike Pompeo.  With his direct but unassuming manner, Secretary Mike Pompeo has been carving out a distinguished conservative record as the 70th Secretary of State of the United States.  Where the previous Secretary of State, Rex Tillerson, had failed miserably to advance the America First policy of sovereignty and democratic accountability, Mr. Pompeo has succeeded.  He has also won the support of pro-lifers around the world for his unapologetic support of the president's pro-life position, expanding the Mexico City Policy and implementing the Siljander Amendment.

For several months Steve Linick, the Obama-appointed inspector general at the State Department, had been rumored to have been investigating the secretary of state himself.  Inspector General Linick had been at the center of the purging of Ms. Stull and Ambassador Moley last year, issuing a report siding with the anonymous deep state career officials against both conservative Trump appointees.  According to different media reports, once Linick was finished with Ms. Stull and Ambassador Moley, he began investigating Secretary of State Mike Pompeo for the absurd crime of having staffers walk his dog and pick-up his dry cleaning.  As Mr. Linick conducted his “investigation”, the same players in the media and congress lined up to accomplish the ultimate purge.  But this time they probably aimed too high, and President Trump unilaterally fired Inspector General Linick.

But just like the Russian collusion scandal that wasn't but never ends, the political persecution of conservatives by the deep state doesn’t stop, it just shifts targets and produces new accusations.  And while they may not be able to take down Secretary Pompeo or President Trump, whose bite sent them yelping back into the dark corridors of the Department of State, Congressman Elliot Engel, the deep state, and their allies in the media continue to plot their never-ending conservative purge from executive agencies.  Thus, having failed to use the inspector general to tar Pompeo's reputation, Democrats are now pulling in Brian Bulatao to testify before Mr. Engel's committee.  Mr. Bulatao is one of Secretary Pompeo's closest aides, and a lifelong friend who has been with  Pompeo through West Point, Harvard law school, and the CIA.

The deep state starts a purge at USAID

In my previous article, I bemoaned the fact that no one seemed to come to Ms. Stull's aid, at least not publicly.  Not only would it have been the honorable thing to do, but it also would have sent a strong message to the deep state.  Instead, the leftist cabal of career civil servants and their friends in congress and the media learned that they could coordinate their efforts to make life so miserable for conservatives in executive agencies, that eventually they would be forced to resign.  The deep state went to work purging conservatives at USAID, which of late has been showing signs of pulling back on the promotion of abortion and other sacrosanct items on the radical left's agenda.

USAID is a very powerful executive agency, managing 27 billion of tax-payer funds every year. And even though USAID's motto is “from the American people”, it appears that the hard-earned money that is taken from the American tax-payer and doled out around the world can only be given to causes that submit to radical leftist orthodoxy and even then only by people who subscribe to radical leftist beliefs such as transgenderism and radical feminism.

The article cites anonymous leakers who say that “staffers’ concerns are driven in large part by the recent hiring and promotion at USAID of a handful of political appointees with deeply conservative views and a history of making anti-LGBTQ, anti-Muslim and even anti-democracy statements.”  In addition, Politico reports the astonishing fact that a letter is circulating internally at USAID that “asks Barsa, among other things, to issue a public statement “affirming that Black Lives Matter;” devise a strategy for improving minority recruitment; and meet with the secretaries of State and Defense to discuss ways to end structural racism within the U.S. national security apparatus.”  The fact that almost all of the 27 billion dollars of taxpayer money goes to aid nations where people of color and many of them Muslim live, apparently, is not enough for the deep state globalists.

But in particular, the deep state at USAID is unhappy with several Trump administration appointees who are conservative Christians and are trying to implement President Trump's agenda within the agency.  President Trump's political appointees singled out by Politico are Bethany Kozma, Merritt Corrigan, and Mark Lloyd.  Of course, these political appointees are a big part of the reason why USAID has begun to put the brakes on USAID's blatant promotion of abortion and has begun to involve conservative NGOs in the work of USAID. One example of the reversal of the Obama era abortion promotion is exemplified by a recent letter from the agency to the United Nations warning it not to promote abortion as part of its response to the coronavirus pandemic.  For this, the head of USAID received a hectoring letter from none other than Congressman Engel.

Unfortunately, the man who signed the bold letter to the UN that aroused the anger of Democrats on the Hill, the interim head of USAID, a man named John Barsa, has not learned the lesson from the experience of Ms. Stull, Ambassador Moley, and Secretary Pompeo.  Instead of biting back like Pompeo, it appears that he is seeking to appease the radical leftists in his agency.  Responding to vague claims carried by left-wing media outlets that Ms. Kozma and Ms. Corrigan are anti-trans and homophobic, i.e. guilty of the crime of being practicing Christians, Mr. Barsa struck a conciliatory tone, assuring Politico and the deep state bullies that “leadership will take appropriate action to hold accountable any employee, regardless of hiring mechanism, who is found to have engaged in discriminatory or harassing behavior.”

The formula to get rid of Trump’s conservative appointees

Whether it is a lower profile political appointee such as Ms. Stull or the people at USAID, or a higher profile Trump administration official such as Ambassador Moley or Secretary of State Mike Pompeo, the formula is very simple.  A Pro-life, pro-family, loyal Trump political appointee is accused by anonymous career diplomats of vague charges of bullying (often of homophobia) and political partisanship within the bureaucracy; this leads to perfectly coordinated insider media reports in Politico, Foreign Policy, and the Washington Post; the media coverage paves the way for simultaneous inquiries from two of the most corrupt congressmen in Washington DC, Democrat Senator Bob Menendez and House Foreign Affairs Committee Chairman Eliot Engel (D-NY).  Based on this manufactured “public” outcry, the Inspector General begins an investigation into the alleged crimes of the loyal Trump diplomats, eventually releasing reports that neutralize the power of the political appointees to actually accomplish their job and implement the President's agenda.  Frustrated and feeling abandoned by a political class that doesn't want to step into a landmine at the State Department, the good and faithful diplomats appointed by the President are forced to resign, and the deep state continues to push its own policy agenda, completely independent of the will of the people who elected a president with a completely different policy agenda from their own radical leftist policies.

It remains to be seen what the result of the latest deep state purge is both at USAID and with Secretary Pompeo's close assistant.  What is no longer in question is the modus operandi of the deep state, Democrats, and the media to attempt to purge conservative members of President Trump's administration.