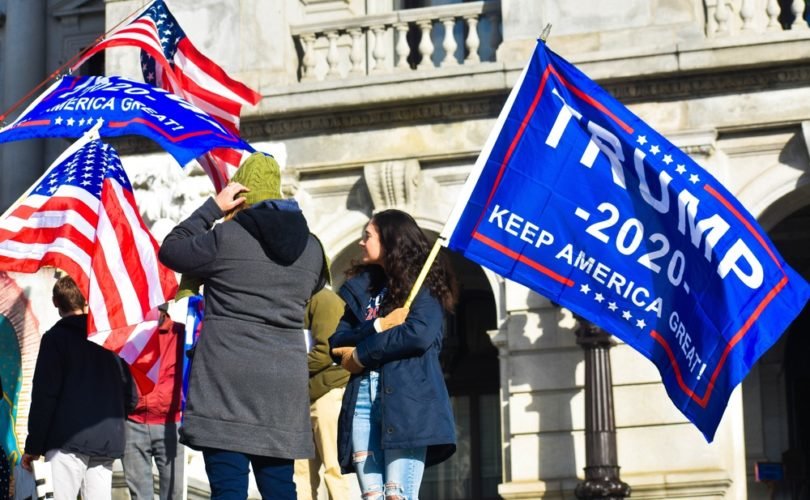 May 4, 2021 (American Thinker) – Their normal human sympathies have atrophied.  They live in the desert of their own inhuman politics.  They are cold and apparently lack a spiritual life.  Desperate to look down on other people, they take fatuity to a new level.

David Atkins, recently elected as a California member of the Democratic National Committee, mused on Twitter (Nov. 21, 2020): “How do you deprogram 75 million people who would literally die to stick it to the domestic enemies the teevee and youtube conspiracy vids told them to hate? No, seriously…how DO you deprogram 75 million people? Where do you start? Fox? Facebook? We have to start thinking in terms of post-WWII Germany or Japan. Or the failures of Reconstruction in the South.”

Bret Stephens, certified by the New York Times as a journalist, summed up the American political landscape ten weeks after the election (Jan. 18, 2021):

The larger question in my mind is whether the G.O.P. is the village that must be destroyed in order to be saved, or, alternatively, is it like a group of previously reasonable people who got taken in by a cult and now must go through some kind of deprogramming so that they can lead normal lives again?  My hope is that once Republicans realize that Trump was both a moral and political disaster for them, they might recover their senses.

Katie Couric, famous TV person, reacted viscerally to this “larger question” when chatting with Bill Maher on his Real Time show (Jan. 19, 2020).  Katie confided her contempt for those who don't agree with her.  She was particularly upset with GOP congressmen.  “It's really bizarre, isn't it, when you think about how AWOL so many of these members of Congress have gotten? … And the question is, how are we going to really almost deprogram these people who have signed up for the cult of Trump?”

Bill Maher read from the same sermon: “I mean, what do you do about these people?  There's 147 Republicans in Congress who still don't concede that Trump lost the election.  What do you do about people who are in the government who don't believe in our way of government?”

The Washington Post also has a clairvoyant, Brian Klaas:

For the past four years, the United States was governed by a conspiracy theorist in chief.  Whether by retweeting QAnon from the Oval Office or painting himself as the victim of shadowy “deep state” plots at rallies, President Donald Trump injected the toxin of baseless conspiratorial thinking straight into America's political bloodstream.  On Jan 6, 2021, America saw how far that venom had spread, as a ragtag group of militias, racist extremists and flag-waving disciples of Trumpism stormed the Capitol[.]

Columnist Klaas laments the near futility of attempting to “deprogram” millions of Trump-supporters, claiming that many have “gone far enough down the rabbit hole of conspiratorial thinking.”  His essay “Why is it so hard to deprogram Trumpian conspiracy theorists?” depicts millions of Trump-supporters as so devoted to “dangerous lunacy” that nearly all hope is lost of bringing them “back to reality.”

Many readers must feel that Klaas is talking about himself.  Baseless conspiratorial thinking, indeed.  There is little hope of bringing him back to reality.

Steven Hassan, of Salon, can probably claim to be among the first to discuss some of these items.  A year before the election, he asked: “Is it possible to deprogram Trump's political cult members and return them to normal society?  Should good Americans isolate Trump supporters and refuse to interact with them?”

Hassan deals in such epiphanies as follows:

One of the most universal techniques of subverting our ability to correctly assess reality is through phobia indoctrination. This is the implantation of irrational fears against questioning the leader, the doctrine, or the organization or cult's policies[.] … These techniques include behavior control, information control, thought control, and emotional control to keep people dependent and obedient within that group's structure.

Who needs all this psychoanalytical jibber-jabber?  Simple.  People whose self-esteem is shaky — i.e., they can hardly stand themselves.  So they label other people deplorable even as they probably suspect how deplorable they are.

Every time the cult member says, “I hate Trump,” the real me is preening: “I'm a genuine and superior person.  And people like me!”  The more evil you claim that Trump is, the more beneficent you are claiming to be.

The fascinating thing is the dead-brain, tone-deaf consciousness you need to muse in this offhand way about deprogramming and reprogramming many tens of millions of people.  As if this cascade of crimes is just a walk to the drugstore.  After all, what is Katie Couric demanding?  Kidnapping?  Torture?  Human-trafficking?  Involuntary servitude?  At least.

Can deprogramming be done in a day?  More probably weeks or months.  Where will people stay?  Who pays for all this?  When you move them around, do you use school buses or tractor-trailers?  Do you put them in straitjackets?

One perennial thread in fascism is a love affair with brutality.  One can't help feeling that some of these people would love to bring back the guillotine and have a front-row seat as heads plop into the basket.  We can almost see Joy Behar grinning with anticipation.

Perhaps the basic sin is not so grotesque, merely the overestimating of one's intelligence.  The New York Times, always trying to equate Trump with Hitler, started using the word cult all the time, and before you know it, it's a fact as solid as the Rocky Mountains.  No further discussion required.  In the same way, all these people believe they personally witnessed Trump as he personally commanded an insurrection to capture a building that was already his.  Only the cognitively incomplete could claim to comprehend this caper.  (Spoiler alert: History will conclude there is no cult and no insurrection.  Repeat ten times each day.)

The public schools almost cannot be bothered to teach knowledge.  And we see that this attitude has infected all the best people.  Everything is whatever they say it is.  There's really no need to discuss evidence with peasants.  There is a serious question whether they should even be allowed to exist.

The only cult is the people who think CNN is the political middle ground.  The only insurrection is the sacking and looting of the city named Veritas, where facts and knowledge were once cherished.

The whole point of America was to be free to make your own choices, live and let live.  But now the left does not believe in choices or freedom to choose the answers each individual likes best.  It's a brutal setback for personal independence and a cunning victory for totalitarianism.