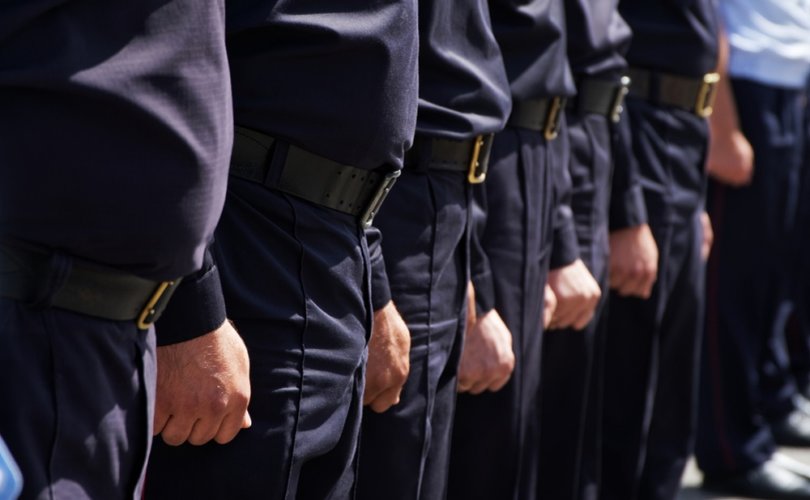 Note from LifeSite president Steve Jalsevac: Item (1) correctly refers to the US Founders’ concept of religious freedom, but not in the way that LifeSite readers would specifically refer to “God” or “Jesus Christ” rather than to a vague “higher power.” Nevertheless, US Constitutional protection of religious belief and practice has been a uniquely crucial government safeguard against those who would crush our beliefs and must be aggressively invoked to stop such illegal suppression.

(American Thinker) – Does anybody still think totalitarianism can’t happen here in America? Ask yourself how many of these steps we’ve already galloped past.

Any belief in a higher power is threatening to the State. If there is a “higher law” that takes precedence over government orders, then personal morality is a justifiable reason for disobeying the State.

America’s founding was a product of the Enlightenment’s understanding that natural rights and liberties exist apart from and superior to the State’s edicts. These God-given rights, some of which are recorded in the first ten amendments to the U.S. Constitution as the Bill of Rights, cannot be abridged or usurped by the State. For individual sovereignty and personal liberty to be extinguished, then, spiritual belief in a higher power is antithetical to the goals of an overbearing government.

Whether you believe that anthropogenic climate change is an imminent threat or not, this much is indisputable: energy undergirds all economic activity. Everything from agricultural production and industrial manufacturing to supply transport, shipping, and consumer shopping depends upon a constant supply of energy.

There is a reason Western governments have begun aggressively attacking free speech as “misinformation” or “disinformation”: the power to communicate ideas to the broader public threatens governments’ monopoly over “official” truths.

Traditional forms of mass communication — newspapers, radio broadcasts, and television shows — are operated by so few corporations that the State has no problem influencing, if not outright controlling, the information disseminated to the public.

In contrast, social media platforms and independent publishing sites permit citizens (in theory) to bypass State censors, regulators, and other information gatekeepers to communicate directly with large numbers of other citizens.

Just as hydrocarbon energy sustains all economic activity, economic activity is at the heart of all human relations. In a truly free market, people exchange goods and services according to their wants and needs. When those interactions become more frequent, money with agreed-upon value (usually in the form of gold or silver) is used to make exchanges more efficient and to provide a lasting store of value that does not exist when bartering with crops or livestock.

But when governments replace gold coins (with inherent stored value) with paper money, currencies’ worth depends entirely upon State decree. Likewise, should governments continue to simply print money, the value of that money naturally declines.

In effect, the use of fiat currencies allows governments to tax their populations without ever taking a vote. By controlling the only legal medium of exchange, government inserts itself into all commerce. Free markets become controlled.

Government power rests on citizens’ acceptance that only the State can tackle big problems. Therefore, government has a natural incentive to invent big problems for its citizens. Rallying around the flag is not limited to times of war.

Governments have used COVID-19 to mandate personal health treatments, lock down entire economies, censor dissenting points of view, and keep people monitored or under house arrest. Governments have used apocalyptic tales of climate change to push for greater state control over industry. They have declared emergencies over “systemic racism” and “transgender rights” to assert control over private companies. Governments insist that “misinformation” is so deadly that censorship must be embraced. Fear is a tool for maintaining control, so governments mass-produce fear for their own benefit.

Lenin declared, “Give me four years to teach the children, and the seed I have sown will never be uprooted.” Is it any wonder, then, why schools are on the front lines of all cultural battles?

It used to be broadly understood in America that parents are instrumental in determining what is taught in local schools. Now the Department of Justice targets parents unhappy with the leftist indoctrination of their children’s school curricula. Objecting to the State’s infusion of cultural Marxism into education can get one labeled a “domestic terrorist.” Objecting to schools’ increasing exposure of young children to “transgenderism” and graphic sexual content can get one labeled a “bigot.”

Even objecting to young white children being taught to feel guilty for the color of their skin is ironically cast as “racist.” And to top things off, while most Americans have ditched masks as relatively ineffective instruments for diminishing the spread of disease, too many schools are still committed to hardwiring into the little developing minds under their control that the State may force mask compliance (and submission) on a whim.

Is it any surprise, then, that marriage, between a man and a woman, has been under attack for decades? Is it any surprise why motherhood and giving birth to many children have been ridiculed as threats to women’s liberation, whereas abortion on demand is celebrated?

The personal automobile revolutionized the world by liberating the individual from both physical and intellectual isolation. Relatively inexpensive vehicles combined with newly paved roads opened up job opportunities, expanded life choices, and promoted the free exchange of ideas across the continent. Is it any surprise, then, that a controlling State pushes so hard for mass public transportation and the elimination of car ownership?

Is it any surprise that government safety standards and fuel regulations have made it more difficult for Americans to afford a vehicle when almost every other form of modern technology has decreased in price over the decades? Freedom of movement, like freedom of speech, is a threat to government control.

What started with Obamacare, socialized medicine and quickly expanded with Democrat cities’ experimentation with COVID-19 digital passports, is now set to go into overdrive with the introduction of central bank digital currencies.

If government-issued cyber-monies replace the relative anonymity of physical cash, then no purchase, donation, or investment can be free from the prying eyes of the State. Combined with government control over health care and the imposition of mandatory digital IDs, the State will have created the perfect surveillance system. When all human activity is monitored and social credit scores are the norm, personal choice disappears.

Fear and dependency leads to enslavement

When the State determines what you own, what you say, what you may believe, and where you may go, then you have become a slave to total State control. Terrifying citizens into compliance and forcing citizens into dependence for their survival are the hallmarks of all totalitarian regimes. Act accordingly.