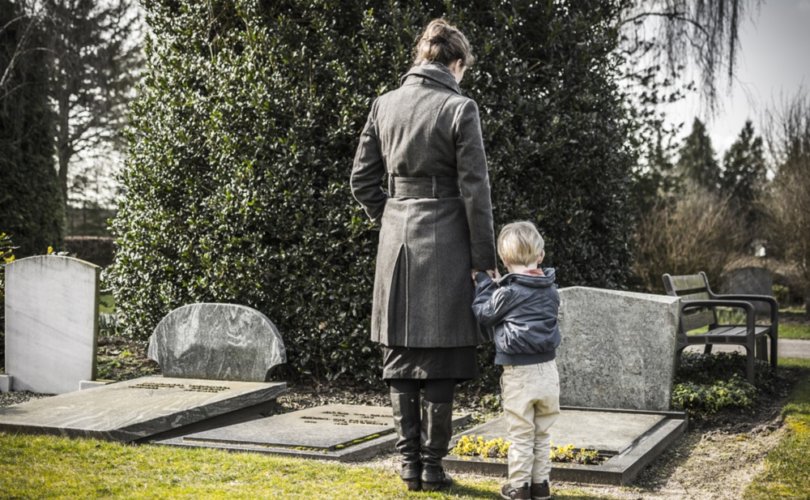 February 17, 2020 (The Catholic Thing) — Somebody alerted me the other day to a podcast by a child psychologist. He was asked whether children should attend funerals and firmly replied that they should not.

Funerals are very private, intimate, and ugly affairs, he reasoned. Even adults only attend them because they must, and when attending them children might see their parents in a state of fragility, which can be traumatic.

Of course, there’s a lot of this these days: it’s part of the post-Christian outlook on death. But I admit I was shocked to hear it from the mouth of a professional therapist.

I remember taking a newborn baby to the funeral of a good friend’s grandfather. I simply didn’t have anywhere to leave him. I knew no harm would come to him, but I wasn’t expecting the effect it would have on everybody else. His presence lit up what was otherwise a rather heavy and gloomy affair. People in mourning seemed grateful to be able to stoop down and play with him instead of musing on death and what had been a drawn-out illness. The conversation turned to the joys and potential of young life.

I suppose some funerals might be ugly and sad, but do they have to be? The only funerals I’ve been to that I’d describe as ugly were those of people who had no faith and, therefore, no hope in the afterlife. These invariably end up at the ugliest institution created by modern man: the crematorium.

But funerals can be beautiful. I’m not so sure about joyful, but definitely beautiful. And what a privilege to be a part of that beauty. To share in that moment with a family. When was it that sad and tragic became synonymous with ugly?

I want my funeral to be a declaration of my faith in the resurrection and eternal life. I want my body placed in the earth like the sacred thing it is, not incinerated like waste. I want booming hymns and a liturgy that makes the knees of my many atheist friends quake in awe.

I’ve told my football friends that they can drape my (simple) coffin in my club’s flag, but only outside of the church. I want nothing between me and my Lord and Savior when I’m placed in his sanctuary.

My wife keeps telling me I should write everything down so that she knows what to do when the time comes. I think I will.

I decided to write a short piece in reply to the therapist, laying out why I will continue to take my children to funerals and to speak to them frankly and openly about the fact that those we love grow old, frail, and die. Or sometimes die earlier and in more tragic circumstances. I published it on my blog and shared it on social media and prepared myself for a couple of pats on the back and maybe some criticism. (Both the original podcast and my response are in Portuguese).

Instead, it went viral. Thousands of hits later I am still overwhelmed by many of the stories people have shared with me, about how consoling it was to be able to say a final goodbye to loved ones when they were small. My own sister never got over the fact that she missed our great-grandmother’s funeral because we were out of the country.

One story, shared by a priest friend, struck me in particular: “When I was 10 I lost my older brother, who was 12. The truth and the pain of what was going on were never kept from us during his illness. My father’s expression changed forever, and I would never have understood him, nor the anxiety he felt for me during my own adolescence, had I not seen his face that day.”

Another friend shared that when her father died the family organized a special Mass just for the children, where a message of hope in eternal life was shared with them in a way they could better understand. What a wonderful idea!

Of course, if all there is to look forward to after you die is to have your decaying body eaten by worms, you might fear introducing the topic to impressionable kids. But in that case, your problem isn’t death but a lack of faith.

My children don’t like the idea that their 90-year-old great-grandfather might not be with us much longer. When some close friends of ours lost their newborn son, there were nights when our 9-year-old crawled into our bed for comfort. But this is the same little girl who, being told of the premature death of a very good friend — a priest — from cancer, asked what all the fuss was about. Surely, he was happy in heaven now!

Yes, we think we’re strengthening them by exposing them to this, but sometimes it’s we who walk away with our faith uplifted.

Of course, there is a time and a place. I’m not suggesting we take children to every funeral we go to and make them stare at random corpses. But there are other ways of preparing them. Stories about martyrs, heroes who gave their lives for others, gentle reminders that the soul is more important than the body, and that love sometimes requires the ultimate sacrifice.

Secularists often say we are harming our kids by filling their heads with fantasies about God, saints and angels. But what could be more harmful in the long run than bringing up your child to think that nobody they love dies? They’ll find out eventually, right?

The question is, do we want to raise our children to be unrealistically happy, or to be free? If happiness is based on shielding them from tragedy at all cost, it’s bound to be short-lived — and harmful, as the psychologists should recognize. I’ll take freedom, true freedom any day: a freedom that strengthens and gives hope and does not tremble in the face of death.

The freedom Christ bequeathed us on the day he broke our chains.