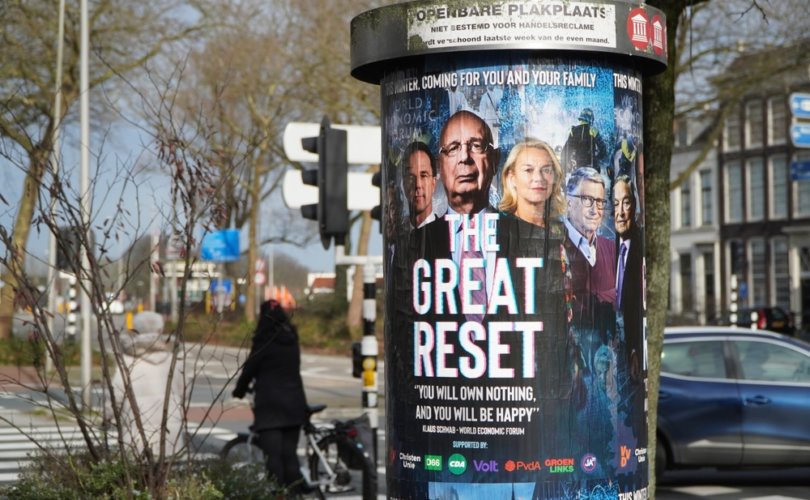 (Conservative Treehouse) – The goal of this outline is to answer a frequent question about what the alignment of government and private sector officials mean when they say, “managing the transition.”

Some of this is self-explanatory, some of this has been astutely explained by others (with specific reference points), yet much of this is what they cannot say publicly. So here we go.

I will further expand, and hopefully this will provide information so that you can make decisions on how to protect your interests.

The central bankers are trying to support western government policy. Unfortunately, the government policy they are under obligation to support is the fundamental energy shift, or what the World Economic Forum (WEF) has called the “Build Back Better” climate change agenda.

Monetary policy can only impact one side of the inflation challenge. The western bankers (EU central bank, U.S. Federal Reserve bank, and various banking groups) are raising interest rates in order to “tame inflation” by “taming demand.” However, as you know, the global economic demand has been declining for several quarters. Raising interest rates into an already contracting economy only does one thing: it speeds up the rate of economic contraction.

Economic contraction is the lowering of economic activity. Raise interest rates – in a general sense – and businesses invest less, borrowers borrow less, consumers purchase less, employers expand less, and the economy overall slows down. When the economy turns negative, meaning less products and services are produced, we enter a recession. Some businesses and employers do not survive a recession and subsequently unemployment rises.

During recessionary periods people buy less stuff, people have less income stability, and economic activity drops. When the banks raise interest rates into an economy that is already stalled or contracting, unemployment and general pain on Main Street increases. Workers are laid off, incomes shrink, consumer spending drops, and that leads to less employment. Recessions are bad for middle-class and working-class people.

However, that said, there is one “benefit” from a recession: energy use drops.

A recession also brings along a natural drop in energy prices as less overall energy is used inside an economy that is slowing, stalled, or contracting.

Oil prices drop as less oil is needed for the manufacturing of goods. Energy use in transportation also drops and generally gasoline prices drop because less transportation fuel is needed, because fewer goods are being transported. When the economy goes into a recession, energy use and prices always drop.

Put these factors together and you start to see how the transition to a new western energy policy, the Build Back Better agenda, benefits from a recession.

This is the essential understanding needed to reconcile why central banks would intentionally create an economic contraction. The bankers are supporting the governmental objective of transitioning the western economy into a new energy system away from oil, coal, and natural gas. The banks are supporting the policy makers.

Instead, almost all the central banks are saying their interest rate hikes are intended to cool inflation by lowering demand.  However, it is not demand that is driving inflation; it is the policy making behind the energy transition that is driving higher costs on everything.

The various central banks and monetary policymakers know this; in fact, they are lying about their motives. They have to lie, because if they were to tell the truth there would be an uprising, and the success of the energy agenda would be put at risk.

In order to support the energy objectives of the various governments, the central banks are trying – and succeeding – to lower economic activity. Less economic activity means lower energy needs. This is what they call “managing the transition” to the new economy based on “sustainable energy.”

The banks and policy makers are ultimately managing the economic decline in order to Build Back Better in the future. This is why the originating charter of the central banks is being ignored, and the banks are raising interest rates into an already contracting economy.

Unfortunately, for the average person this means the banks and policy makers have entered a phase where it is in their interests to shrink the global economy. They are trying to control the collapse of the various economies by working together. This means less jobs, less work, a lower standard of living, and a period of extreme financial pressure for the average person.

Eventually, we will reach a point where the governments will need to step in and fill the gap from the declined economic activity. Bailouts and subsidies will be needed as they were in the COVID lockdown test run. Unemployed workers and the people being impacted by a prolonged economic recession will need subsidies in order to survive.

The government policy makers are planning to do just that: spend more. They practiced during the COVID economic lockdowns, now they will execute a similar policy path as they manage the energy transition.

We have only just entered the beginning phase of this Build Back Better agenda. No one, including the banks and policy makers, have any idea how long this is going to take. We could be in this period of severe economic contraction for several years, perhaps decades, until their grand design of a new energy future is complete. This has been the discussion at the WEF, as the instructions were passed out.

The entire time the western government architects are doing this, they must keep the demand for traditional energy products like coal, oil, and gas at the lowest demand possible. That is why the central banks and politicians must keep economic activity at the lowest – yet survivable – rate possible.