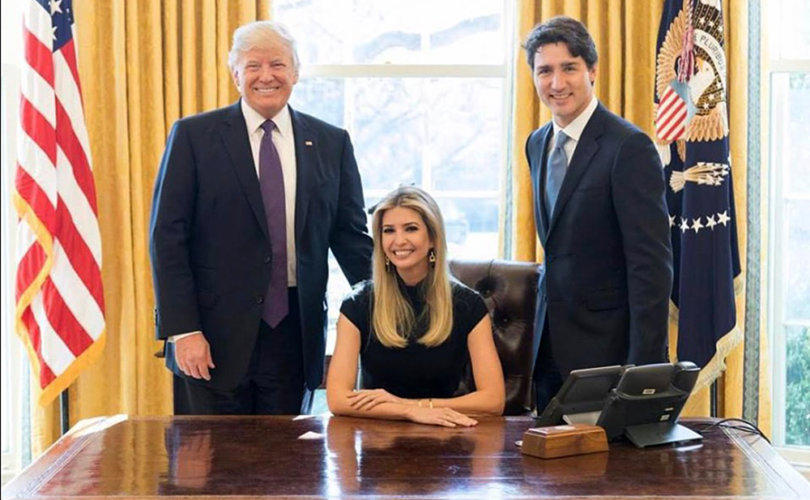 May 12, 2017 (American Thinker) – If Ivanka Trump listens to the Americans who elected her father in one of the greatest upsets in American electoral history, she will discover her clear path to saving our Republic.

It is a measure of the unprecedented nature of the period of history we are in that a young woman with no background, experience or training in politics, political philosophy, American civics or the Constitution, finds herself in a position of such power.

Yet even in the absence of any credentials of the statesman or knowledgeable political officeholder, Ivanka has the opportunity to set our nation back on track to preserving our sovereignty and freedom, in addition to regaining our prosperity.

You might ask how such a young, idealistic, naïve woman born and bred to a cloistered life of privilege and luxury, and whose passion has been focused on fashion design and marketing, could suddenly become her country's savior, much as the young Joan of Arc did for France.

It is perhaps even more unlikely, given the fact that Ivanka's husband is a Democrat, and his father a major Democrat donor, and Ivanka herself appears to have adopted that party along with her husband's religion, that she would aid the country on the side of her father's largely conservative agenda.

And while it is commendable that Ivanka is developing an interest in historical figures, it is at best problematic, from the perspective of her father's supporters, that she's singing the praises of iconic leftist Eleanor Roosevelt.

In fact, in recent interviews with the New York Times, Ivanka “talked about unleashing the economic potential of women – some of her phrases sounding uncannily like those of Hillary Clinton – and effused about finding a new role model in Eleanor Roosevelt, whose autobiography she is reading.”

We know she means well.  We know she is kindhearted. We know she has good intentions. “I'm really, really trying to learn,” she told the NY Times. We also know where good intentions can lead when not backed by depth and breadth of historical perspective, understanding of political and economic complex realities, and awareness of possible unintended consequences.

We also learn from the same Times article that Ivanka, sitting on a panel in Berlin with the likes of Merkel and Lagarde,  didn't know how to answer the straightforward question: whom do you represent: the president, the American people, or your business?  “I am rather unfamiliar with this role,” said the first daughter.  But we can understand and sympathize with her dilemma, since she most emphatically does not represent either the president or the people who elected him.  If anything, she seems to represent Hillary Clinton, leftist Democrats, and assorted globalists… but it would be neither polite nor politic to say so.

We know, however, that she is very caring and compassionate.

In fact, we know she was so distressed over the photographs of the children dying in Syria from poison gas that she urged her father to bomb more Syrians, perhaps not realizing that more mothers and children might be killed – but then she couldn't be expected to know about the nitty-gritty of political strategic manipulation.

We know she cares about mothers because she is now a mother, and so she urged her father to include maternity leave benefits in any insurance program that replaces Obamacare – perhaps not realizing that the money to fund this generous welfare program must either come from taxes, thereby increasing the burden on the middle class, or from deficit spending, or else be taken away from other, possibly even more important programs.

We know she cares about the planet, because she and husband Jared are working to convince the president to walk back his strong position against carbon taxes – that's carbon as in carbon dioxide, the stuff we exhale and that plants need for their survival – but I digress.  Using her enormous influence with her father, Ivanka is pushing for the U.S. to stay in the Paris Climate agreements.  No less a globalist heavy hitter than Michael Bloomberg says he hopes President Trump will follow Ivanka's lead and reverse his campaign promise to pull America out of the Paris climate agreements, signed by Obama, which candidate Trump understood would cripple our industries, stifle our energy production, and dramatically raise our cost of living.

Says Bloomberg: “I hope he changes his mind and he listens to his daughter, who's supposedly a big advocate of staying the course.”  It may strike some as odd that Bloomberg  seems to confer upon the inexperienced Ivanka the credentials of a climate scientist and policy wonk – or might he actually believe she can twist the president around her perfectly manicured pinky?

But let's give Ivanka credit for being smart, as well as beautiful.

Surely, she recognizes that a young, untutored woman woefully ignorant of history, economics, political theory, and the American founding documents does not belong in the seat of power, inside the Oval Office.

Surely, she realizes that the voters elected Donald Trump to the highest office in the land, and not his pretty daughter of whom he is so proud.

Surely, she recognizes that her political beliefs and perspectives are the antithesis of her father's.  And surely, she recognizes that each time she cajoles Daddy to “do the right thing” – which invariably turns out to be the liberal/socialist/globalist thing – she is urging him to betray his base, his own word, his integrity, and the very country he has vowed to make safe, strong, prosperous, and great again.

Surely, she realizes that if the president wants to have a family member close by besides his wife, it makes most sense that it be Don Jr., who, by all accounts, is a conservative and a patriot who believes in his father's agenda and would be supportive of him, rather than continuously trying to pry him away from his promises to the American people.

Surely, she is familiar with the Ten Commandments, which are basic to both Judaism and Christianity, which say, “Honor thy father and mother” – and surely, she recognizes that she should honor her father more than ever now that he is the president, and that for her to presume to tell him what to do is the height of arrogance as well as folly.

Yes, I feel certain that Ivanka is bright enough and compassionate enough to save her country by making the only conceivable intelligent decision – quite possibly the most important one of her life – to pack up her things, and move her husband and children back to New York, and focus on her life there as a wife and mother, and on her businesses, and to stay out of politics, out of Washington, and far away from the Oval Office.

Making this brave and bold move will endear her to millions of Americans and help make the country great again for all of us.

Ivanka Trump may then go down in history as the woman who saved America.

This article was originally published on AmericanThinker.com and is re-published with permission.

Planned Parenthood chief begs Ivanka to ‘stand up for’ abortion