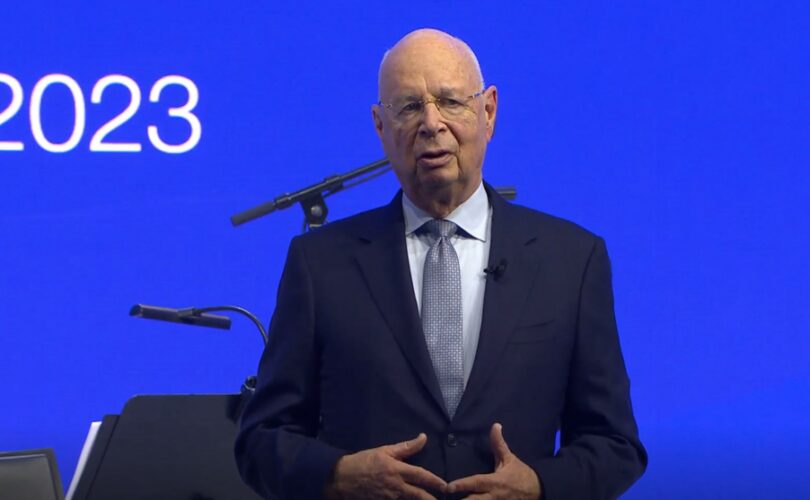 (LifeSiteNews) — On Monday, Klaus Schwab delivered a speech at the Crystal Awards Ceremony, on the opening day of the World Economic Forum’s 2023 Davos conference. In this address he framed the world as a complex of problems to which his organization is the solution.

We couldn’t meet at a more challenging time. We are confronted with so many crises simultaneously. What does it need to master the future?

I think to have a platform where all stakeholders of global society are engaged: governments, business, civil societies, young generation – I could go on – I think is the first step: to… meet all the challenges.

In the “Global Risks” analysis of the World Economic Forum (WEF) there is no mention of the fact that many – if not all – of these global crises are the result of the actions of governments and organizations such as Schwab’s.

It is curious then, to present the disease as the cure. The agenda of the WEF is obviously advanced by the promotion of a sense of crisis, which would naturally encourage people to consider some means of escape. By these means the WEF frames itself as a kind of emergency exit for humanity – a route which no one would take in normal circumstances. Yet its own framing of reality excludes the enormous deficit amounting from the very ideology it claims will save it.

Of course, we do live in extraordinary times. It is important to remember, however, that the soaring costs of living have been caused by the very governments and businesses Schwab wishes to further empower. Lockdown policies, ruinous sanctions, and the popularization of the sense of a global environmental crisis have all resulted in measures which are seriously undermining our standard of living, both now and long into the future.

The moral inversion of our mass media-based culture has created virtues of vices in the minds of a nihilistic population of pleasure seeking individuals. Sex, self-indulgence, individual extremism without limit are the hallmarks of the banality of unrestrained desire. People are now increasingly patterned socially on a screen-based simulation of reality which is feeding the “mental health deterioration” noted in the 2022 risks report.

The means by which people are informed, or mal-informed, about the nature of reality is itself making them mentally ill. What is more, these messages are shaped by a system of algorithms patterned on the trillions of data points gathered from almost 20 years of social media. In short, the agents of the state have a hand in shaping your views about yourself, your reality and your life choices, without your knowledge.

This is a deficit in the human dimension and it is occurring now. There is a democratic deficit in the West, wherewith the formerly “inalienable” liberties of movement, conscience, and expression were suspended in a dubious global health emergency. This showed that our rights, far from being inviolable, are to be dismissed when their free exercise would prove inconvenient to the management of the population.

This means these rights are not rights at all. They have not been postponed but cancelled. The WEF makes no mention of the sudden interruption of the basic liberties which defined the West for the best part of the last century. The policies over the global health emergency, and those around the controversial mRNA treatments developed as a response, pass without mention.

These measures are one reason no one speaks of “The Free World,” as the West has arguably lost its legitimate claim to moral superiority. It is no longer a pluralist Liberal democratic system, strongly tending instead towards a one-dimensional ideology wherein we are free to agree, or suffer the devastating consequences of public dissent for noticing a growing list of basic facts out loud. To be a dissident these days is to speak as a normal person on social media. It is a development which favors the aims of the WEF and its partners, as the less happy – and the less human – we are, the more commendable may appear their vision.

This shocking transformation of our culture, from one which was proud to defend the tolerance of opposing points of view to a censorious surveillance state enthusiastically policed by unpaid and vengeful commissars, has no place in the WEF agenda. It is this kind of algorithm-unfriendly behaviour which will be likely edited out of our futures. As people refer more to screen-based media than to one another for their sense of how to live, we can expect to see the machine selecting against the very independence of mind and strength of character that makes for the best in us all.

What Mr. Schwab is arguing for is a technocratic vision of a humanity transformed by the transition to a less human future. We have a management problem. In one sense, the people who manage our lives are never held accountable for their disastrous decision making. In another, it is apparent from the aims and announcements of the WEF that it is leveraging a manufactured terror over climate change to promote a post human future.

Today’s WEF agenda presents one example of the many strands of this strategy, which in seeking to replace human interaction with screen-based simulation reflects a much earlier view of one famous environmentalist.

James Lovelock, who became something of a celebrity due to his coining of the term “Gaia,” first advanced the idea that people playing video games was a far better thing for the planet than them going outside to meet real people. This is regardless of the impact on their individual mental health, likely to deteriorate as real life human scale experiences are replaced with screen-based stimulation. In a theme now typical of the argument from environmental crisis, he eagerly foresaw a future of humans being replaced by cyborgs – a fusion of man and machine.

The global collaboration village is a WEF initiative which promotes the replacement of human scale relations with a machine’s idea of reality. The WEF presents this attempt to encourage people away from face-to-face human reality and to further blend their identities with pixels and algorithms as a beneficial exercise in human cooperation.

This is a technique common to their every initiative in the posthuman agenda. It reduces to making the substitution of real life with screens sound exciting, as if we can participate in the formation of a new, digitalized democratic world. It is creation reimagined by Facebook, and has the depressingly childish avatars to match.

These processes are not only sinister in their aim to refocus humanity on screen-based alternatives to real life, but are infantile – and infantilizing. What the scheme represents is a cutesy, ersatz replacement for your own imagination.

The project to master the future is to replace human scale participation in life with a more manageable, editable version of future humanity, patterned on screen-based media and shaped by technology such as gene-edited and biometric implants. Mastering the future is about mastering global population management – in number, in behaviour, in nature, and through its social repatterning upon a virtual world.

From the point of view of technocratic management, humanity is a problem to be solved. It aims to perfect its own system by deleting everything which anchors us in the human scale world. From belief in God to our customs of nation and kinship, everything which defines human nature is to be altered in a project of rationalization. It is a dream for the masters. For the mastered, their dreams will be the dreams of the machine.