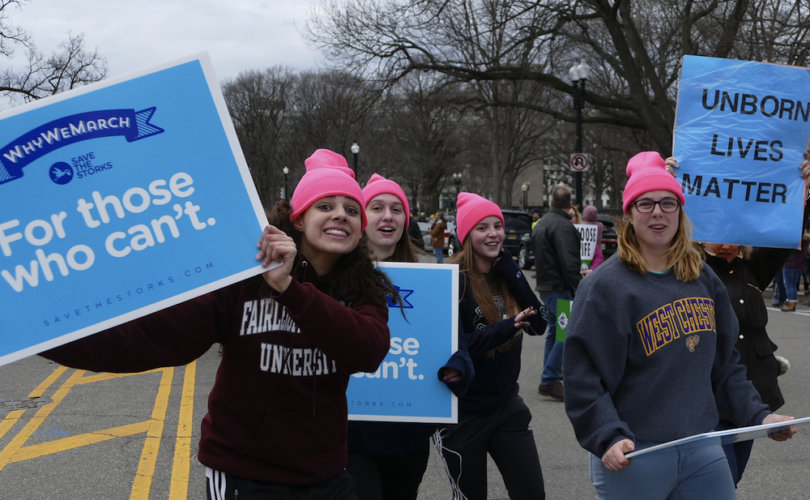 June 12, 2017 (Priests for Life) — Millennials have a bad rap. They’re labeled as crybabies, snowflakes, fragile, spoiled, and entitled. They’re told they want safe spaces, participation trophies, and handouts. They’re accused of wanting the most benefits for the least work, and the list goes on and on. I feel kind of bad for them. I suspect that every new generation of young adults that pops up gets some flack, but I don’t ever remember having it as bad as Millennials. If there is one thing that gets most overlooked within their cohort, it’s that they are the most pro-life generation yet. And they deserve a thumbs up for that.

In the 2016 March for Life, the youth made up 80 percent of approximately the half-million marchers. The pro-life movement is mostly a youth movement. As the most tech savvy of all the generations, they are perhaps the least likely to be fooled by pro-abortion rhetoric. Their first baby pictures were most likely sonogram images or even 3D ultrasound pictures. They have access to YouTube, Snapchat, Tumblr, Twitter, VSCO, Instagram, etc. and they know how to use it. There is no topic they don’t know how to Google search within seconds for answers.  They know what abortion is and they don’t like it.

It’s easy to understand why. This generation is not just standing up for babies in danger of being aborted — they are also standing up for themselves. They understand that they are survivors. They know that when they were in the womb, they were not protected. Millennials experience “survivor syndrome,” like soldiers back from the war in which their comrades were killed. In fact, during the gatherings of the Silent No More campaign (a project of Priests for Life and Anglicans for Life), we have a growing awareness of siblings holding signs that say, I mourn my aborted sibling.

The sense of being an abortion survivor is a big part of what motivates young pro-life activists today. In fact, when I am asked to encourage parishes and pro-life organizations to focus more on recruiting youth, it’s not a difficult task. Millennials understand the pro-life message better than older generations, and the most common response they give to the question, “Why are you involved in trying to stop abortion?” is “Because it could have been me.”

I often point out that our youth are not simply the “future leaders” of the pro-life movement. They are leaders here and now, in more ways than one. They have a lot to offer to their peers, as well as to the rest of us. Those of us who have been in the movement longer need to understand what will happen when we recruit more youth into the pro-life effort. They will challenge us. They will remind us of things that we have perhaps forgotten, and will even be able to teach us a new way of activism, and even a new way of thinking. We’ve all seen the edgy, in-your-face activism of Millennials. It’s void of any pretense. That’s refreshing.

Straightforwardness is a characteristic of young people when confronting fundamental moral issues like pro-life. They think in straight lines. Unaccustomed to the layers of complication that years of enduring resistance from opponents can bring, young people can frame certain questions with a simple and direct clarity. And while they always need to be open to learn from those with more experience, they also need to be listened to. We need to let them shape our own thinking.

When made aware that killing is taking place in the building down the street, they will ask, “Well, let’s go down there and stop it! We should go there and tell them we are not going to leave until the killing stops! If that’s where the babies are that we need to save, what are we doing here?” Or, when told that a particular candidate for office is in favor of keeping child-killing legal, our youth will declare, “Well, we have to tell people not to vote for that person!” When they understand the clarity of Gospel teaching about the sanctity of life, they will say, “All the pastors need to preach about this and sign their people up for pro-life activity! It’s more important than anything else!”

Is there not truth in this “straight-line thinking?” We can learn something from them and refocus our attention and energy on fundamental things which, in the end, simply have to be said and done. Maybe we’ve become too complicated and are too quick to say, “it’s not so simple.”

I rejoice in the pro-life commitment and involvement of our youth — so much so, in fact, that while I am committed to training them for the battle, I am not going to “hand the battle over to them.” The time to end abortion is now, not in another generation or two. Rather than “handing the baton” to our young people, let's take their hands, and let's march together into the promised land of victory for the unborn!