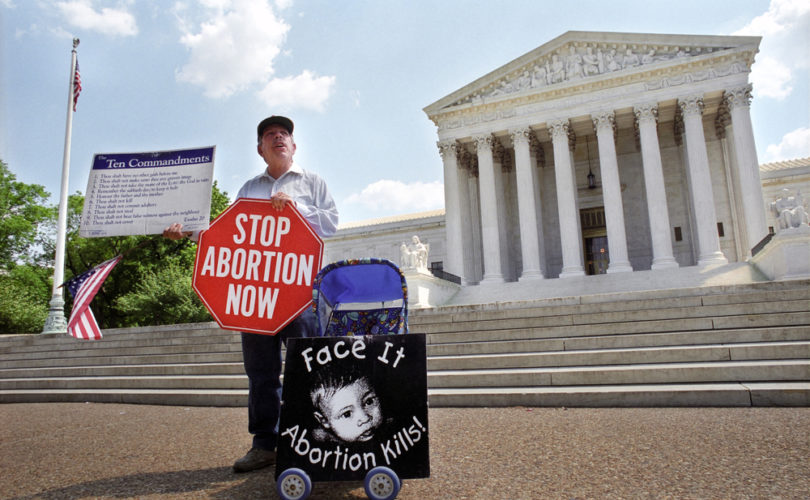 March 26, 2015 (CrisisMagazine.com) — A few years ago, when an undergraduate student research assistant of mine—a recent convert to Catholicism—told me that he was planning to meet with a well-known dissenting Catholic theology professor who was then ensconced in an endowed chair at a major metropolitan Catholic university, I told him: “Be careful, you might end up liking him too much.” I jokingly told my student not to make eye contact with the theologian because he might begin to find himself agreeing with him that Catholic teachings “really allow” for women’s ordination and full reproductive rights—including access to abortion.

I was reminded of that conversation this week when I began reading a new book by yet another engaging Catholic theology professor at a major metropolitan university who also claims (pg 6) that the argument he puts forward in his book, Beyond the Abortion Wars, is “consistent with defined Catholic doctrine.” Written by Charles Camosy, associate professor of theology at Fordham University, the new book purports to be in line with Catholic teachings and promises “a way forward for a new generation.” But, Camosy delivers yet another argument for a woman’s right to choose abortion when confronted with an unborn child that he has described—in the past—as an “innocent aggressor.”

Indeed, Camosy has spent much of his career trying to convince us that he knows Catholic teachings better than the bishops. Criticizing Bishop Olmsted for his intervention and excommunication of a hospital administrator for her role in the direct abortion at a Phoenix Catholic hospital, Camosy suggested in 2013 that “the infamous Phoenix abortion case set us back in this regard.” Implying that Bishop Olmsted was not smart enough to understand the moral theology involved in the case, Camosy claimed that “The moral theology in the case was complex—which makes the decision to declare publicly that Sr. McBride had excommunicated herself even more inexplicable. The Church can do better.” For Camosy, “Catholics must be ready to help shape our new discussion on abortion. And we must do so in a way that draws people into the conversation—not only with respectful listening, but speaking in a way that is both coherent and sensitive.”

This new book is likely Camosy’s attempt to “draw people into the conversation.” But, there is little in his book that is either coherent or sensitive. Claiming to want to move “beyond” the abortion wars, Camosy creates an argument that seems designed to offend the pro-life side, while giving great respect to those who want to make sure abortion remains legal.

Especially offensive for pro-life readers will be Camosy’s description of the abortifacient, RU-486 as a form of “indirect abortion.” The reality is that RU-486, commonly known as the “abortion pill,” effectively ends an early pregnancy (up to 8 weeks) by turning off the pregnancy hormone (progesterone). Progesterone is necessary to maintain the pregnancy and when it is made inoperative, the fetus is aborted. For Camosy, who claims that his book is “consistent with settled Catholic doctrine,” this is not a “direct” abortion. To illustrate this, Camosy enlists philosopher Judith Jarvis Thompson’s 1971 “Defense of Abortion”—the hypothetical story of the young woman who is kidnapped and wakes up in a hospital bed to find that her healthy circulatory system has been hooked up to a famous unconscious violinist who has a fatal kidney ailment. The woman’s body is being used to keep the violinist alive until a “cure” for the violinist can be found. Camosy makes the case—as hundreds of thousands of pro-choice proponents have made in the past four decades—that one cannot be guilty of directly killing the violinist if one simply disconnects oneself from him. Likewise, for Camosy, simply taking the drug RU 486 is not “directly” killing the fetus. He writes:

The drugs present in RU 486 do not by their very nature appear to attack the fetus. Instead, the drug cuts off the pregnancy hormone and the fetus is detached from the woman’s body…. Using RU 486 is like removing yourself from [Judith Jarvis Thompson’s] violinist once you are attached. You don’t aim at his death, but instead remove yourself because you don’t think you have the duty to support his life with your body…. Some abortions are indirect and better understood as refusals to aid (pp 82-83).

Perhaps there are some readers who will find Camosy’s argument convincing, but I am not sure that many faithful Catholic readers will agree that it is consistent with settled Catholic doctrine.

As one who is hardly a bystander in the abortion wars, I wanted to like this book. As an incrementalist who celebrates every small step in creating policy to protect the unborn, I had high hopes that this book would at last begin to bridge the divide. A decade ago, in my own book, The Politics of Abortion, I joined the argument begun by writers like Marvin Olasky in his Abortion Rites: A Social History of Abortion in America, that it is more effective to attempt to change the hearts and minds of people than to create divisive public policy at the federal level. I share Charles Camosy’s desire to end the abortion wars—but this war cannot end until the real war on the unborn ends. This does not mean that the two sides cannot work together—battling it out at the state level—where there is the opportunity for the greatest success. But, complex philosophical arguments on whether RU 486 is a direct or indirect form of abortion are not helpful to these conversations.

Camosy must know that we can never really “end” the abortion wars as long as unborn children are still viewed as “aggressors” or “invaders” and can still be legally aborted. Faithful Catholics know that there is no middle ground on this—the pro-life side has to prevail in any war on the unborn. It can be done incrementally but ground has to be gained—not ceded—for the pro-life side. Besides, Camosy seems a bit late to the battlefield to begin with. In many ways, he seems to have missed the fact that the pro-life side is already winning many of the battles through waiting periods, ultrasound and parental notification requirements, and restrictions on late term abortion at the state level. More than 300 policies to protect the unborn have been passed at the state level just in the past few years. The number of abortions each year has fallen to pre-Roe era levels—the lowest in more than four decades.   Much of these gains are due to the selfless efforts of the pro-life community and their religious leaders. Yet, just as victory appears possible in many more states, Camosy seems to want to surrender by resurrecting the tired rhetoric—and the unconscious violinists—of forty years ago.

While it is disappointing, it is not unexpected considering Camosy’s last book lauded the contributions of Princeton’s most notorious professor, Peter Singer—the proponent of abortion, euthanasia and infanticide. Claiming that Singer is “motivated by an admirable desire to respond to the suffering of human and non-human animals,” Camosy’s 2012 book, Peter Singer and Christian Ethics: Beyond Polarization, argues that, “Though Singer is pro-choice for infanticide, on all the numerous and complicated issues related to abortion but one, Singer sounds an awful lot like Pope John Paul II.”  In a post at New Evangelical Partnership for the Common Good, a progressive organization led by Rev. Richard Cizik (a former lobbyist for the National Association of Evangelicals who was removed from his position because of his public support for same sex unions, and his softening stance on abortion) Camosy wrote that he found Singer to be “friendly and compassionate.”  Camosy currently serves on the Advisory Board of Cizik’s New Evangelical Partnership—where he has posted Peter Singer-like articles including: “Why Christians Should Support Rationing Health Care.”

One cannot know the motivations of another—we can never know what is in another’s heart so it is difficult to know why Charles Camosy wrote this book. It must be difficult to be a pro-life professor at Fordham University—a school known for dissenting theologians like Elizabeth Johnson. But, if one truly wants to advance a culture of life in which all children are welcomed into the world, it would seem that inviting Peter Singer to be an honored speaker to students at Fordham in 2012 is not the way to do it, nor would claiming that RU-486 “may not aim at death by intention.” Perhaps it is unwise to continue to critically review Camosy’s work from a Catholic perspective because it gives such statements credibility—and notoriety. But, as long as Camosy continues to claim that his writings and policy suggestions—including his newly proposed “Mother and Prenatal Child Protection Act”—are “consistent with defined Catholic doctrine,” faithful Catholics will have to continue to denounce them.