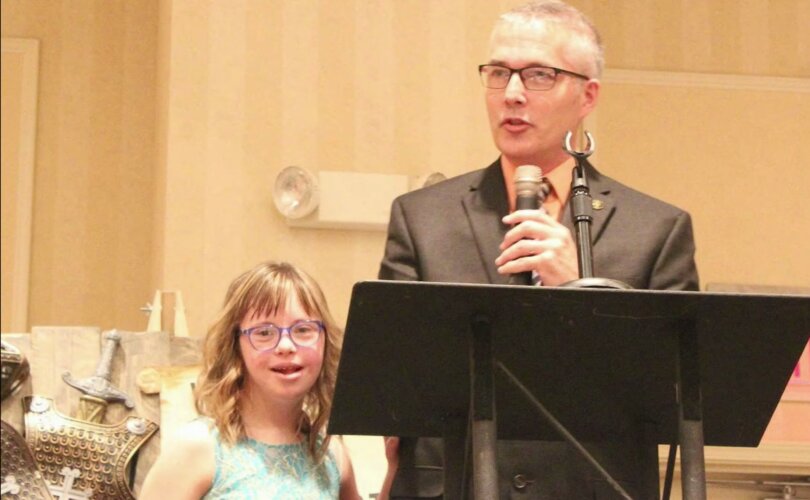 (Live Action) — Kurt Kondrich’s dream was to serve his community as a police officer, delaying marriage while fulfilling his goals. When he married his wife Margie, the couple wasn’t sure they could have children – but at the age of 36, Margie gave birth to their son. Kondrich was thrilled.

Four years later, when Margie was expecting their second child, she was informed the baby was at high risk for Down syndrome due to her advanced age. Doctors pressured the couple to undergo testing for the condition.

“I couldn’t understand why these tests needed to be performed,” Kondrich told Live Action News. “But the medical staff kept telling us we could end the pregnancy – and even encouraged we do so – if the tests indicated our baby had Down syndrome. I was astounded; I would never consider executing my child regardless of the disability.”

While Margie did notice the baby was not as active as their older child had been, the couple was determined to continue the pregnancy and refused prenatal testing. Kondrich had always lived his life serving and protecting the innocent and he couldn’t fathom terminating pregnancies because of abnormalities detected in the womb.

“There seems to be this cultural mandate for unattainable protection,” Kondrich said. “I don’t know anyone who has a ‘normal’ child. We knew our child was a girl and we had named her Chloe. We already loved her and couldn’t wait to welcome her into our family.”

When Chloe was born, tests verified she had Down syndrome. Despite her initial trepidation, Kondrich’s wife was eager to hold and bond with their baby – much to the surprise of the doctors. The couple didn’t know much about Down syndrome and the hospital staff did not seem willing to offer guidance. Kondrich also noticed the nurses did not check on their baby as often as they did other babies.

Kondrich said, “We were basically ignored by hospital staff, but I managed to sneak in a bottle of wine to celebrate Chloe’s birth and brought her big brother Nolan to see her. He immediately fell in love with her.”

Later, Kondrich noticed a nurse had left some material about Down syndrome she had gleaned from the Internet in the hospital room. The Kondrichs connected to the Down Syndrome Center and learned from other couples who chose to undergo prenatal testing that they, too, had been urged to end their pregnancies once Down syndrome had been detected.

Kondrich also discovered that Iceland claimed to have “cured” Down syndrome through prenatal genocide, a practice he saw occurring in his own country. Shocked and saddened, Kondrich decided to leave his career in law enforcement and return to school to earn a master’s degree in early childhood intervention.

“It was as if these prenatal tests were being weaponized against babies in the womb who don’t meet predetermined standards,” he said. “How could I sit back and not do anything while the world was wiping out children like Chloe?”

Kondrich was appointed chair to an advisory committee in Pennsylvania, providing him with an avenue to impact legislation around services for children with special needs.

“I had a mission to educate our community about the positive aspects of children with disabilities and made regular trips to the state capitol with Chloe by my side to meet with legislators and compel them to increase state funding for early educational services,” he said.

His determination paid off when, after seven months of advocacy, the Down Syndrome Prenatal Education Act was signed into law with bi-partisan support. Dubbed “Chloe’s Law,” it mandates that women be provided with positive information about Down syndrome.

“Because of Chloe’s Law, Pennsylvania is now the best place for children with disabilities,” Kondrich said.

Author Stephanie Wincik, who was writing a book about Down syndrome, had read about Kondrich’s advocacy and contacted him. Her book, “Brilliant Souls,” released in 2003, profiled the extraordinary nature of those with Down syndrome and included Chloe’s story.

Advocacy that impacted a global audience

For the “DADvocate,” the passage of Chloe’s Law opened the doors of opportunities beyond anything he could have imagined. He received a deluge of speaking engagements and met with notable figures such as Mike Pence and Dr. Mehmet Oz. He appeared before the United Nations twice to vehemently refute Iceland’s policy of prenatal genocide. Women from all over the world became emotional hearing Kondrich’s testimony; many wanted to meet Chloe and take photos with her.

Kondrich told Live Action News, “My daughter loves people for who they are. She doesn’t see background, gender, race, or ethnicity. When people meet Chloe, they can’t deny she has a right to be here. Those who are progressive are supposed to be all about tolerance, but their narrative often collapses in the face of their intolerance for those who are less than perfect.”

A pro-life Italian reporter was so inspired by Kondrich’s testimony that she returned to the United States and produced a short video, which she posted on a website in seven languages. The clip received worldwide acclaim.

At the 2018 March for Life in D.C., Kondrich and Chloe met with former President Donald Trump, who attended the event.

Kondrich said, “It was a great experience to be among those who fight for life and to meet President Trump. Chloe was delighted when the president declared her beautiful and kissed her on the head.”

A few years later, Kondrich was invited to the Right to Life convention in West Virginia by sponsors of a bill protecting all preborn children diagnosed with Down syndrome from abortion. Accompanying her dad, Chloe signed copies of “Brilliant Souls.”

“World Down Syndrome Day in March 2021 was one of the finest days of my life,” Kondrich said. “That’s when the bill was signed into law by the governor. It’s a day I will forever cherish. I’m grateful to champion for children with Down syndrome. Wherever and whenever God opens doors, Chloe and I will go.”