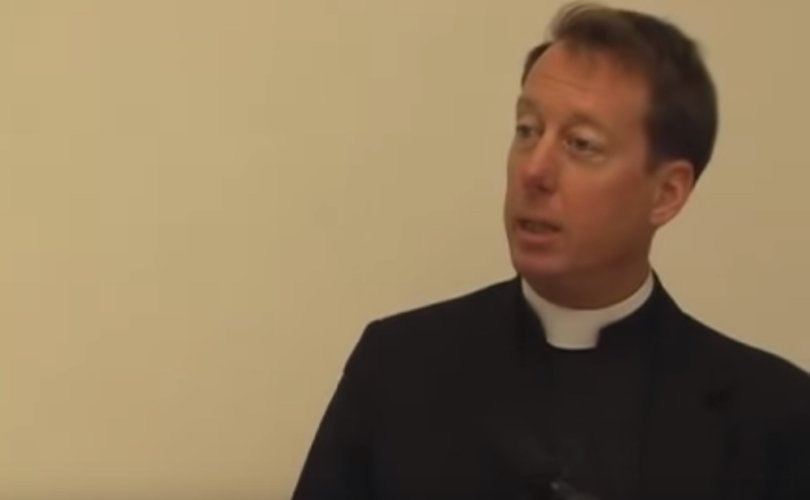 June 7, 2019 (LifeSiteNews) – What happened to Father Kevin Cusick with his Twitter account this week typifies the fallen state of the world and social media discourse today.

Word spread Wednesday among Catholics on the social media platform that Father Cusick’s account had been banned or deleted, depending on who was tweeting about it.

Cusick, a Catholic priest serving in southern Maryland who is also an author and blogger, was prolific on Twitter.

He has been vocal about various things occurring in the Church and the world, and doesn’t generally mince words. Today, that gets you into trouble, with liberal big tech and the synonymous left, and just about anybody with a keyboard and an opinion.

Cusick took his account down after controversy surrounding one of his tweets earlier this week concerning another priest who’d asked a woman at Sunday Mass over the weekend to cover her shoulders. Cusick made the request in his tweet for ladies to dress modestly to help preserve the purity of men at Mass and avoid awkward situations.

“Ladies, a priest I know was forced on Sunday to ask a woman at Mass to cover her shoulders,” Cusick said. “Please help the priest to protect the purity of the men at holy Mass by choosing to dress modestly. The alternative is awkward for all involved. Thank you.”

The Twitter mob’s pounce was swift and fierce – torches, pitchforks, and all.

People quibbled with Cusick’s use of the word “forced” when referring to the priest having to ask a woman to cover her shoulders. And they ridiculed the idea that bare shoulders should constitute any problem.

The feminist class excoriated the notion of a man presuming to request a woman change her manner of dress. They, and others, attacked the idea that women should have to act to preserve purity in men.

And of course, the anti-Catholic continent dropped by in typical fashion to tar the whole Church with the clergy sex abuse brush.

It was classic social media vitriol for our time.

‘Everybody's head is ready to explode’

Before this happened Wednesday, a colleague told me he had the sense that everybody's head is ready to explode … on a whole array of issues.

Undeniably many people have come to where they cannot simply disagree with someone, and they have lost the ability for reasonable debate or discussion in favor of being just plain nasty.

I had the pleasure of meeting Father Cusick briefly last fall at the U.S. Bishops’ fall meeting, and I’d previously cited him writing for LifeSite.

I’ve always found him to be a steady, sound, and intelligent voice of orthodoxy.

Cusick is a military veteran. He’s served his country, and he’s serving the Church. He’s explained his decision in his column at The Wanderer, and may or may not need my defense, but it’s freely given.

Why such hate for modesty?

It should be clear that Father Cusick saying the other priest was “forced” to make the request was polite speech. I’m thinking the other priest would likely have preferred to not have to say something about the woman needing to be better covered, but was obliged to in the pursuit of preserving modesty at Mass.

Father Cusick was asking ladies to use their free will to choose to dress modestly for Mass. Why is that such a problem?

It’s easy to see how the idea of bare shoulders being an issue would be a joke to many, given the ubiquitous graphic sexuality cesspool to which much of our culture has sunk. When it’s all sex all the time on all forms of media out there, shoulders are hardly shocking anymore.

I submit that people really need to stop, take a breath and also a minute to think. Perhaps there still are places where consideration of more decorum is in order.

If there’s a place where it absolutely is in order, it’s in God’s house, whether with the Tridentine Mass or not.

I submit as well that the presumption that a woman’s bare shoulders can’t be a source of immodesty at Mass only serves to effectively demonstrate the coarsened attitudes in our culture toward the human body.

A woman’s shoulders can indeed be beautiful and attractive; the human body is a beautiful thing. That’s a good thing, and we should acknowledge it. But we’re foolish if we try to deny that even a woman’s shoulders, certainly depending on how they’re presented, can prompt certain thoughts in others.

We should accept that God made something beautiful in the body, but also accept that certain parts should be reserved for certain situations.

Do I think sleeveless tops should be banned at Mass?

No, but let’s not kid ourselves anymore, sleeveless tops very often mean playing peek-a-boo with a woman’s nearby breasts. It only takes common sense to determine if something is too revealing for Mass, even using subjective judgment, and I do think we should want to dress in a way that honors God.

‘Because it’s his job’

I’m as independent as the next woman, but I have no problem at all with a priest reminding his flock that dressing modestly for Mass should be the norm – because it’s his job, and because dressing respectfully for Mass is the right thing to do.

If you’ve opened your eyes and seen how many people dress, whether for Mass or not, then no explanation is needed for why this reminder is, in fact, quite appropriate.

I’m not a prude, but I’ll take a priest willing to defend modesty and the dignity of women and men any day over the alternative.

We all have a stake in one another’s purity

Father Cusick’s tweet might have caused the loudest head explosions from the assertion that women have a stake in preserving the purity of men.

Are the sexes really that at war with each other that we have to pretend that showing skin doesn’t have the potential to trigger a reaction?

It’s only logical to acknowledge the fact that showing more skin is going to draw attention.

Why is it a problem to dress modestly for Mass? Are we so much at war with ourselves that we no longer recognize that we all have a stake in each other’s purity and salvation?

As women, do we really care that little about others, and about ourselves?

The Vatican requires that women cover their shoulders when they visit. During my first time there I did so happily, at a hot time of the year. It didn’t take away from my visit or my dignity; on the contrary, it was a reminder of it.

Showing respect for Our Lord and ourselves is the least we can do at Mass.

Too much modesty isn’t the problem

The Church’s sex abuse scandal, as heinous as it is, does not negate Father Cusick from having a say in things, certainly not this.

While he does have a different standard than the laity in terms of public discourse and accountability, he did not sign away the right to freedom of speech at ordination.

Those who don’t like what Father Cusick had to say should have been able to disagree while being decent and reasonable about it – employing the actual definitions of decency and reason, not today’s non-standard of “What offends me is hate speech and should be quashed.”

There may be some Catholics critical of the idea of priests or bishops evangelizing via social media. While the character limit clearly restricts the promulgation of deep thoughts, it’s still where much of the world resides and thus where they can, and often where they must be reached.

For my part, I’m not looking for the Summa on Twitter, but I am very much heartened by faithful shepherds who are out there standing for the Church, even if it means they are served ugly dust-ups as Father Cusick was.

If nothing else, their being willing to step out in this fashion shows they have skin in the game – that they care about their flock.

Cusick has been frank about the things of the world that are at odds with our faith, which expectedly garners enemies. That some of those ridiculing him over his tweet are Catholic is telling as to just how lost we have become.

And absolutely, the priests and bishops who do evangelize on social media must take great care, as do we all, lest they get wrapped up and be devoured by this so often very toxic element of the world. It appears Father Cusick had this in mind with his decision to leave Twitter. Good for him.

Still, we need more forthrightness and clarity from our clergy, not less, and that includes on social media.

One doesn’t have to attend a particular priest’s parish or reside in a certain bishop’s diocese to be a member of his flock.

If you were on a plane, and it was in danger of going down, you wouldn’t quibble over parish affiliation when approaching the priest on the plane for absolution of your sins. Likewise in the day-to-day, if you realize the gift of the priesthood, you value the presence of faithful priests wherever you encounter them.

I’m not a member of Father Cusick’s Maryland parish, but as a Catholic I’ve been enriched by his presence on Twitter.

In a brief initial statement responding to inquiries, Cusick’s editor at The Wanderer said he’d informed them he voluntarily shut down his Twitter account “for the good of the Church.”

I certainly hope, for the good of the Church, that at some point his voice comes back to social media.