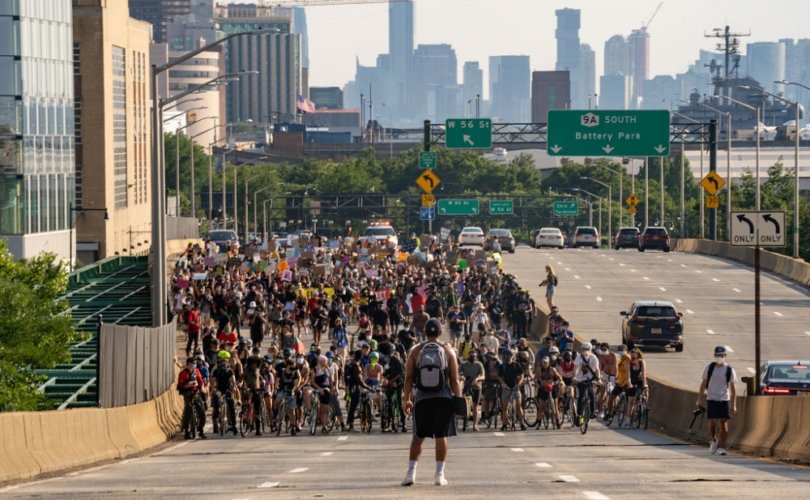 August 10, 2020 (LifeSiteNews) — George Santayana, philosopher, novelist and poet, was known for his aphorisms. He penned the statement, “Those who cannot remember the past are condemned to repeat it.” The Bible affirms that truth. “There is nothing new under the sun.” As we see Marxist anarchy exploding all over our country in the name of  Black Lives Matter (BLM), those with a sense of history recognize its eerie familiarity. The same violence, censorship, and tyranny characterized Masonic and communist uprisings in France, Russia, Spain, Mexico, Cuba, and South America as well as the Fascist takeover of Germany. The goal of BLM is clear: to transform the United States into one more Marxist country.

According to the “herstory” link on the BLM website, the group was founded by three “radical Black organizers,” Patrisse Cullors, Alicia Garza, and Opal Tometi. In a 2015 video, Cullors bragged:

The first thing, I think, is that we actually do have an ideological frame. Myself and Alicia in particular are trained organizers[.] … We are trained Marxists. We are super-versed on, sort of, ideological theories.

Cullors credits Weather Underground organizer Eric Mann, jailed for conspiring to commit murder, as her mentor and calls herself a prison, police, and militarization abolitionist. In an interview about her memoir, When They Call you a Terrorist, Cullors said, “I’m queer, so is Alicia — we are openly queer black women.” She said BLM should be

an organization not only led by black women, but it’s also a movement led by black queer women, black trans women, and that we can’t deny those identities and we can’t put those on the backburners, as we’ve seen historically in other civil rights movements.

Considering the backgrounds of its founders, one can hardly be surprised that among BLM’s goals is to “disrupt the Western-prescribed nuclear family structure … [and] foster a queer‐affirming network.” Both of these agendas are trademarks of Marxist ideology used to break down the morals of a country, making it easy prey for communism. For Christians, they also represent the embrace of intrinsic moral evils that deeply offend Almighty God.

The history is clear, and those who care about our country’s future need to study it. The seeds were planted years ago in preparation for the unrest we see today. In 1923 Carl Grünberg, a Marxist professor of law founded the Frankfurt School, the first Marxist research center attached to a major university, the University of Frankfurt. It hired and promoted Marxist ideologues intent on destroying Western culture and the Christian religion in order to prepare the communist utopia. The Frankfurt School injected Marxism into the cultural life of the United States, especially after 1933, when Hitler banned the institute and it moved briefly to Geneva before finding a home at Columbia University in New York City. From there, the Marxists injected their poisonous theories directly into the U.S. academy for almost two decades before returning to Germany in 1951.

Herbert Marcuse, one of the most prominent members of the Frankfurt School and a German American philosopher and political theorist, promoted the work of two other Frankfurt philosophers, Max Horkheimer and Theodor Adorno. He transformed their ideas, rather obscure in the original, into a popularized form in order to influence college students.

Horkheimer believed that Marxism must be shifted from economics to culture. He believed that the working class “would not be the agent of revolution … it was becoming part of the middle class.” In other words, hard work and success act as a vaccine against class envy, the root of communism. Adorno promoted the idea that since “life under capitalism was by definition alienating, music, art, architecture, etc. must also be alienating in order to be ‘true.’” Instead of promoting truth, beauty, and goodness, hallmarks of a civilized culture, cultural Marxists elevated the ugly, the dissonant, and the brutal to reduce humanity to the level of beasts. The ideas of these men, combined with those of Erich Fromm and Wilhelm Reich, followers of Sigmund Freud’s school of psychiatry (repression is bad, let it all hang out) would provide the tools for undermining and destroying Western culture.

The success of Horkheimer’s and Adorno’s ideas is clearly evident, even in religion. Consider all the ugly churches built between the 1960s and 1980s, the horrendous “music” with neither melody nor harmony (only a jungle beat), the ugliness of modern art, the stripped down Bauhaus movement in architecture, the moral depravity of film and television, the casual pornography of modern literature, etc. Above all, they lit the fuse of the Sexual Revolution, spreading evil like shrapnel throughout the world.

In a 2017 article in Chronicles Magazine, William Lind described Marcuse’s theory from his book Eros and Civilization. Marcuse argued:

“[B]y replacing repression with ‘non-procreative eros’ and dumping the ‘reality principle’ for the pleasure principle,’ we could create a society of no work and all play.” Marcuse believed the “revolution would come from a coalition of young people, blacks, feminist women, gays, etc., the sacred ‘victim groups’ of political correctness.” In a famous essay written in the 1960’s, Marcuse argued for what he called ‘liberating tolerance,’ which he defined as tolerance for all ideas and movements coming from the left and intolerance for all ideas and movements coming from the right[.] … Marcuse injected the Cultural Marxism of the Frankfurt School into the Baby Boomers, and it remains the ideology of much of that generation today. You cannot defy it and be a member of the elite. Cultural Marxism’s death grip on education, both in the public schools and in the universities ensures that it has been pumped into succeeding generations as well. Because it relies not on logical argument but on psychological conditioning, to which the video-screen media lend themselves well, it is difficult to fight. Anyone who rejects it has been conditioned to look into the mirror and see ‘another Hitler.’

Lind alleges that it is impossible to use philosophical arguments against the “psychological conditioning” of Cultural Marxism that has so infected our age. For several generations, the young have been trained to respond to events in ways that bypass rational thought and focus on feelings. Many no longer seem capable of rational, independent thought. Political correctness is endemic; “follow the Marxist leader” is the game of the moment.

Soviet KGB agent Yuri Bezmenov, who defected to Canada in 1970, described the communist brainwashing process in a 1985 interview available on YouTube:

Ideological subversion is the process which is legitimate, [overt], and open. You can see it with your own eyes[.] … There is no mystery. It has nothing to do with espionage. I know that espionage intelligence gathering looks more romantic[.] … That’s probably why your Hollywood producers are so crazy about James Bond types of films. But in reality the main emphasis of the KGB is NOT in the area of intelligence at all. According to my opinion, and the opinions of many defectors of my caliber, only about 15% of time, money, and manpower is spent on espionage as such. The other 85% is a slow process which we call either ideological subversion, active measures, or psychological warfare. What it basically means is: to change the perception of reality of every American that despite of the abundance of information no one is able to come to sensible conclusions in the interest of defending themselves, their families, their community, and their country[.] … It’s a great brainwashing process which goes very slow and is divided into four basic stages.

Bezmenov went on to describe the first stage, demoralization, which takes 15–20 years and was already well underway in 1985. Demoralization aims to call into question all the moral underpinnings of a society. Truth no longer matters; facts are irrelevant. Perception is everything. The success of the demoralization of America is clear from the collapse of rational thought and moral reasoning since the 1960s. Consider Bezmenov’s phrase, “to change the perception of reality.” Today, most people believe that reality is fluid. “You have your truth; I have mine” is the modern mantra. When a large percentage of a society accepts that a man saying he’s a woman or a woman saying she’s a man makes it true, the culture is in serious reality denial.

If, as Bezmenov says, those who are psychologically conditioned cannot change, are we doomed to live in this insanity for at least another generation? And is there real hope that the next generation will be any better? From the secular viewpoint, it seems hopeless.

But we are not mere creatures of a secular society. As Christians, we live with one foot in the world and one in Heaven. Every time we enter a Catholic church, we step out of time and into eternity, where history is no longer a timeline, but a tapestry. It’s there, in that eternity, that we find answers.

We are clearly in trouble as we watch our cities burn, but has there ever been a worse devastation than the atomic bombings of Hiroshima and Nagasaki? Yet a rectory at ground zero in Hiroshima where a group of priests faithfully practiced the Fatima devotions was spared. Not one of those priests ever experienced the devastating physical effects of radiation sickness. The miracles linked to the rosary have saved numerous countries, from Portugal’s protection during the Spanish Civil War and World War II to the conversion of Mexico after Mary’s apparition at Guadalupe to the communists withdrawing from Austria in 1955 without a shot being fired to the defeat of the attempted communist takeover of Brazil in 1964 by a women’s rosary crusade.

We are not condemned to repeat history’s evil errors; we can choose to repeat its moments of grace. The solution to cultural Marxism in many places and at many times has been devotion to the Sacred Heart of Jesus and the Immaculate Heart of Mary. Bishop Athanasius Schneider recognizes that and is calling for a crusade of reparation for offenses against Our Lord in the Holy Eucharist. We need to recover, he says, the lost hour in Gethsemane. He quotes the words of Karol Wojtyła (Pope John Paul II):

And now the Church seeks to recover that hour in Gethsemane — the hour lost by Peter, James and John — so as to compensate for the Master’s lack of companionship which increased his soul’s suffering. The desire to recover that hour has become a real need for many hearts, especially for those who live as fully as they can the mystery of the divine heart. The Lord Jesus allows us to meet him in that hour [and] he invites us to share the prayer of his heart.

A question comes to mind. Do we have the will to embrace prayer and fasting for the conversion of the world like the little shepherd children of Fatima? If we do, then we need to defend our country. We can do that most effectively at the local level by attending and testifying at city or county board meetings or by visiting local police departments to thank those who defend and protect us on a daily basis. Let us pray and not stand by idly while America falls to Marxist agitators. As people of faith have shown in the past, we can defeat communism through the powerful intercession of Mary and by working to promote all things in Christ.