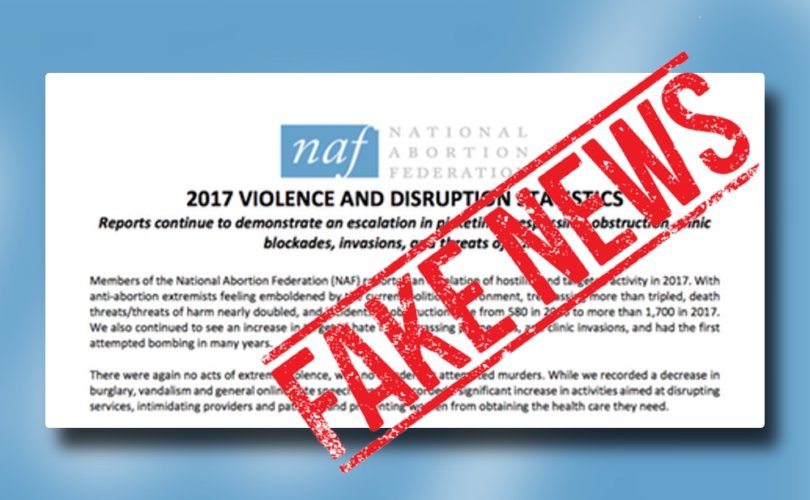 October 25, 2019 (LifeSiteNews) – In leftist professor Noam Chomsky and Edward S. Herman’s classic analysis of the mass media, Manufacturing Consent, the main thesis is that “the ‘societal purpose’ of the media is to inculcate and defend the economic, social and political agenda of privileged groups that dominate the domestic society and the state.”

The ways the media inculcate the “political agenda of privileged groups,” according to Chomsky and Herman, are numerous.

They include the “selection of topics,” “framing of issues,” “filtering of information,” “emphasis and tone,” and, most of all, “by keeping debate within the bounds of acceptable premises.”

But the latest tool used by corporate media to “manufacture consent” is the fake news poll.

Volumes have already been written attempting to explain how and why so many “legitimate” polling organizations, hired by corporate media companies, were so obviously wrong about the results of the 2016 election.

The response of the media and the Democrats to this painful reality has been to pretend it never happened – and once again to point to corporate-paid polls to show that Trump is doomed.

“Polls consistently show Trump trailing most of the possible 2020 Democrats in national and state polling, and often by wide margins,” Philip Bump at the Amazon-owned Washington Post said with a straight face on October 15.

The problem is, even the Democrats themselves don’t believe this propaganda.

Big-name Democrat donors are desperately seeking a new champion for the 2020 election – Michael Bloomberg, Hillary Clinton or Michelle Obama – precisely because they know these polls are bogus.

If they really thought the corporate polling was accurate, why would the Democrat leaders be publicly and frankly panicking?

Of course, from the moment Trump was elected the Democrats have insisted the election was illegitimate and that Trump would soon be impeached.

The Grabien website has documented 95 separate reasons Democrats and corporate media have given for impeaching Trump since he was inaugurated.

First they claimed that Trump was a Russian “asset” and colluded with Vladimir Putin – a charge they are now leveling at the anti-war Democrat Tulsi Gabbard.

When the Russia hoax was proven laughably false, the Democrats then insisted that …

… then his firing of FBI executives James Comey and Andrew McCabe …

…. then his failure to release his tax returns …

… then his violating the “emoluments clause” …

At each of these attempts to gin up public approval for impeachment, the Democrats and their allies in the controlled media have pointed to new polls showing “growing” public support for impeachment.

As early as June 2017, just five months after Trump was inaugurated, Rep. Al Green, D-Texas, even cited a “plurality of polls” as the reason why Trump should be impeached.

“If you've been looking at the polls, you can see that a plurality of persons are of the opinion that the President should be impeached,” Green explained to ABC News.

And sure enough, that was precisely what the polls said.

“An increasing percentage of voters want Congress to impeach President Donald Trump — even if they don’t think Trump has committed the ‘high crimes and misdemeanors’ the Constitution requires,” announced Politico in May 2017.

The Washington Post agreed. In August, the Post headlined, “A big jump in percentage in favor of impeachment,” citing a Public Religion Research Institute (PPRI) poll that showed “support for impeachment growing.”

As Chomsky and Herman point out, this is Propaganda 101.

Every CIA operative engaged in counter-insurgency understands the importance of portraying all resistance as utterly futile, insisting that victory for the regime is assured and that the party or group being supported is “on the right side of history.”

This is why, as the Democrats gear up for their 95th explanation for why they must overturn the 2016 election via impeachment, it is essential that they convince the public that “most people” are on their side.

Don’t be fooled. The latest polls are as real as CNN’s recent footage of “the slaughter of Kurds in Syria” – which actually turned out to be, of course, video of a gun range in Kentucky.

It is just more of the same – the use of corporate-controlled media, as Chomsky and Herman said, to “inculcate and defend the economic, social and political agenda of privileged groups that dominate the domestic society and the state.”

Robert J. Hutchinson writes frequently on the intersection of politics and ideas. He is the author of the upcoming book, What Really Happened: The Lincoln Assassination.