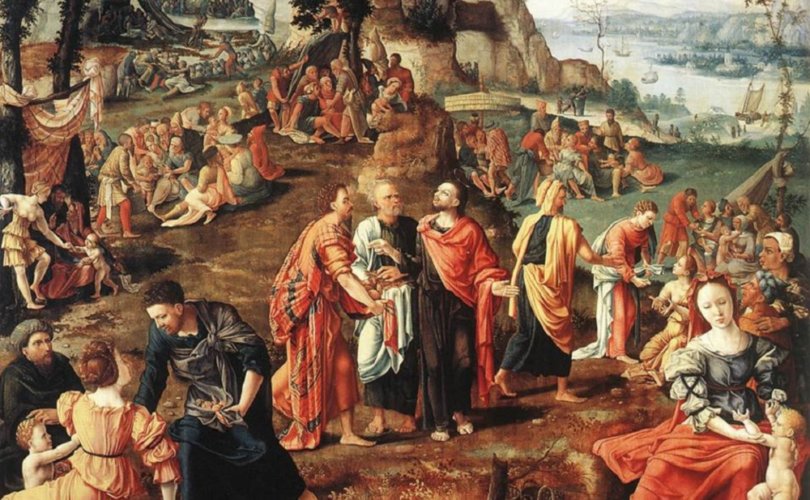 January 10, 2020 (The Catholic Thing) — To call something a miracle is, literally, to say only that it is marvelous, astounding. Think of the Spanish word, mirar, which has the same root. Look, see, and marvel! Many natural events are marvelous: an eclipse, or that a bumblebee can fly. And many human inventions are marvelous too, such as an iPhone, or that a 200-ton jetliner can fly. These are all miracles in a very loose sense of the word.

Human beings in our artistic, intellectual, and moral natures are capable of some fairly marvelous feats. Quantum mechanics is astounding, as is Mozart’s music, as also was the scaling of Point du Hoc by American commandos in the Normandy invasion. We think Oskar Schindler was amazing for saving Jews during the Nazi persecution (and he was). Basically, anything one would want to make a movie about has to be amazing (even Sriracha sauce).

But, again, to call any of these achievements “miracles” would be a very loose way of speaking. Next to a real miracle they look pretty lame.

What is a real miracle? In the strict sense, in a precise sense, a miracle is a change that requires creation or annihilation. Only God can create and annihilate. Therefore, any work that requires creation implies the finger of God. That is why Jesus called his miracles “signs.” They revealed his divine nature. But it wasn’t only that “God was with him.” He didn’t merely pray to God, and God worked a miracle for him. Rather, at his very command the miracle took place. And only God can do that. That is why the faith of the centurion was so impressive (Mt 8:8). He trusted that Jesus by his mere word could heal his servant.

Perhaps you’ve noticed that it’s no part of the correct definition of a miracle that it be marvelous, in the sense of visibly astounding. Every act of consecration at a Mass involves a miracle. That is why we take the centurion’s words as our own before Holy Communion (and it’s good to use a more literal form, as in the most recent translation of the Mass). We are confessing with him that the Lord by his very word, through the agency of the priest, can work a miracle. But it’s not a visible miracle. That it’s not visible is actually part of the miracle.

The sins of the paralytic lowered down through the roof were forgiven. That too was not visible. It was the “more difficult” miracle, the Lord said. But as a concession, to give a sign that this better miracle had taken place, Jesus made him able to walk (Mk 2:1–12).

Perhaps you’ve also noticed also that a true miracle need not be rare. (Although you might say that Catholics make the miracle of forgiveness of sins in the confessional far more rare than it should be.)

The multiplication of the loaves and fishes is debased when clerics, in their homilies, or laity in their wanderings, describe it solely as a sharing, inspired by Jesus. Sharing is not even astounding in the loose sense of the word “miracle.” People in a tough situation come together and pool their resources — not astonishing in the slightest.

The modern sharing interpretation involves a gross misreading of Scripture, in four crucial respects. First, the gospel writers specify that the crowd ate the food that was set before them by Jesus, not some other food, and not their own food. John is very clear about it: the crowd took as much as they wanted precisely from the loaves and fish that Jesus gave them (6:11).

Second, the miracle involved creation because, as if to prove that very point, the morsels left over from the feeding amounted to even more than what was given at the beginning. It is understood that that would have fit into a single basket, and yet the disciples collected twelve baskets of morsels (Mk 6:43). These morsels are explicitly described as those left over (literally, above and beyond what was needed) from what was given to them by Jesus (Jn 6:12), not leftovers from their own food or someone else’s food. It’s very important for the story that superabundance be attributed precisely to Our Lord’s nourishment.

Third, the sharing interpretation fails to explain why the people believed that Jesus had revealed Himself to be another Moses and reacted by wanting to make him king. Despite what partisans of Obama or Bernie might imagine, we don’t want to crown people as kings because they inspire us to share. And Moses didn’t inspire sharing. He called down manna from heaven, which appeared anew every morning as a gratuitous gift. The people knew a true miracle when they saw it.

Fourth, and perhaps most importantly, the sharing interpretation is completely at odds with Our Lord’s own interpretation of the event. Although the miracle did involve ordinary bread and fish, he chastised the people for interpreting the event as about physical food (Jn 6:26). He insisted he did it as a sign of something else. Of what? Of the true bread, which comes down from heaven, which is such that anyone who eats it never dies (6:50). This was His own flesh and blood, he said (6:53).

Nothing can be clearer for us today than that Jesus, in saying this strange thing, was referring to the Eucharist, which the Church has reflected on for 2,000 years and is offered us in each Mass.

What can one say about the blindness or dullness of a holy priest of Jesus Christ — who is about to work a miracle of turning bread and wine into the flesh and blood of the Lord, to offer to the Lord’s followers, to give them the gift of life — who reads the Gospel passage about the loaves and fishes to his congregation and then neglects completely to discuss the real miracle?

Ignoring the very purpose of his life, he tells us it’s about filling our bellies.