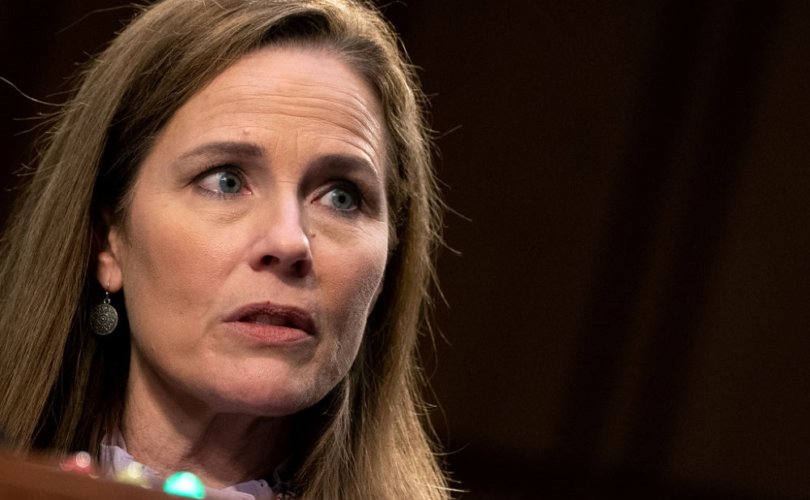 October 16, 2020 (FRC Action) — Among the Left's desperate attacks on Supreme Court nominee Amy Coney Barrett, one of the silliest has to be their railing against her use of the term “sexual preference” in answering a question during her confirmation hearing related to the 2015 Obergefell v. Hodges decision in which the Supreme Court unilaterally redefined civil “marriage” for all fifty states.

One would think that the Left would be celebrating this apparent endorsement of their prized principle of “non-discrimination.” Instead, Sen. Mazie Hirono (D-Hawaii) attacked Barrett that afternoon for using the term “sexual preference” — which she dubbed “offensive and outdated.” (The more politically correct term, you see, is “sexual orientation.”) Hirono insisted the term “sexual preference” is “used by anti-LGBTQ activists to suggest that sexual orientation is a choice.”

Linguistically, it does no such thing. It seems self-evident that if a person has a homosexual “orientation” (often defined as having same-sex sexual attractions), then that person “prefers” sex with people of the same sex. The terms “sexual orientation” and “sexual preference” are essentially synonyms. And they were treated as such in the dictionary — until Tuesday night, when Merriam-Webster's online dictionary suddenly added a statement that using “preference” as a synonym for “orientation” is considered “offensive.” This is notwithstanding the fact that the internet is crawling with examples of liberal heroes — including Joe Biden and Ruth Bader Ginsburg — using the term “sexual preference.”

Orwellian dictates regarding terminology were not the only issue in Hirono's attack on Judge Barrett, though. It came in the context of a lengthy speech about the Obergefell decision, in which Sen. Hirono declared, “That sexual orientation is both a normal expression of human sexuality and immutable was a key part of the majority's opinion in Obergefell.”

This is an accurate description of that opinion — and a key part of the reason why it was profoundly in error. I wrote about this at length in a blog post at the time. Justice Kennedy wrote twice about the supposed “immutability” of sexual orientation in his majority opinion in Obergefell. He wrote that laws prohibiting same-sex civil “marriages” are unconstitutional because they prevent an entire class of people — self-identified gays and lesbians — from ever being able to exercise the “fundamental right” to marry. This claim, however, only makes sense if two premises are true — first, that the principal purpose of marriage is the gratification of sexual desire; and second, that a homosexual orientation is immutable.

But even the amicus brief cited by Justice Kennedy — from the American Psychological Association — did not say that sexual orientation is “immutable.” Instead, it affirmed the multi-faceted nature of “sexual orientation” — which includes not only “sexual, affectional, or romantic attractions,” but also “an individual's sense of personal and social identity based on those attractions, behaviors expressing them, and membership in a community of others who share them.”

Contrary to the stereotype presented by Sen. Hirono, FRC and most other social conservatives do not consider same-sex attractions to be a “choice.” However, “behaviors,” “membership in a community,” and to a large extent “personal and social identity” are primarily a choice. The APA even said in its brief that “sexual orientation ranges along a continuum.” FRC's own amicus brief in Obergefell pointed out the “remarkable (but heretofore unnoticed) fact that dozens of the plaintiffs in the same-sex marriage cases that have been brought over the last twenty-four years previously had been married to a person of the opposite sex.” This is proof on its face that either: a) people with a homosexual orientation are capable of marriage to the opposite sex; or b) people's sexual orientation can change during the life course; or both.

Just a few days ago, members of the Senate Pro-Life Caucus sent a letter to the U.S. Treasury Secretary, Steven Mnuchin, asking him to issue new regulations to ensure that the expense of an abortion cannot be deducted from federal income taxes.

Please SIGN this petition, which supports the Caucus' letter, and urges Secretary Mnuchin to eliminate tax deductions for abortion.

Right now, people can deduct abortions from their federal income taxes because it is considered to be "healthcare."

But, abortion is not healthcare; it is, rather, the taking of innocent pre-born human life.

As the Senators' letter states: "Pregnancy is a natural condition of the human body, for both the mother and her unborn child, and only rarely, if ever, does a pregnancy physically threaten the life of the mother in such a way that the mother's death can only be averted by abortion, rather than through other means such as early induction or Caesarean section. Therefore, the IRS must cease considering abortions (except in the case of physical endangerment to the life of the mother) to be medical care under §213(d) and its implementing regulations."**

Led by Republican Sens. Mike Braun of Indiana and Warren Davidson of Ohio, the letter also says: "Any procedure for which a successful outcome depends on the death of a living human being, born or unborn, cannot be considered health care."

No-one should benefit financially by the taking of innocent human life.

'Did you know many abortions are tax-deductible? These politicians hope to fix that' - https://www.lifesitenews.com/news/100-pro-life-senators-demand-treasury-dept-end-tax-breaks-for-abortion

The Democrats — who are usually so quick to lecture others on following “the science” — have apparently not kept up with the science on sexual orientation. Perhaps they are still deceived by the myth that homosexuality is caused by a “gay gene” — which science has largely debunked. Or perhaps they are unaware of the major academic paper, “Scrutinizing Immutability” — co-authored by lesbian scholar Lisa Diamond — which declared that “arguments based on the immutability of sexual orientation are unscientific, given what we now know from longitudinal, population-based studies of naturally occurring changes in the same-sex attractions of some individuals over time.” (FRC analyzed these studies here.)

Judge Barrett chose not to be drawn into commenting on the statement by Justice Thomas earlier this month, signed by Justice Alito, after the Supreme Court recently denied an appeal from Kentucky county clerk Kim Davis, who conscientiously objected to giving marriage licenses to same-sex couples. Although both Sen. Hirono and Sen. Cory Booker (D-N.J.) quoted Justice Thomas's statement that in Obergefell, “the Court has created a problem that only it can fix,” they ignored the two justices' plain description of what that “problem” was — namely, that “those with sincerely held religious beliefs concerning marriage will find it increasingly difficult to participate in society” because of the decision's “ruinous consequences for religious liberty.”

Again, Judge Barrett refused Sen. Booker's bait, saying only, “I don't know what Justices Thomas and Alito were thinking — you'd have to ask them.”

But when it comes to “sexual preference,” we should be glad that the Supreme Court nominee has spent the last couple decades studying, teaching, and interpreting the law, rather than surfing the web to keep up with the vagaries of the latest politically correct or incorrect terminology.