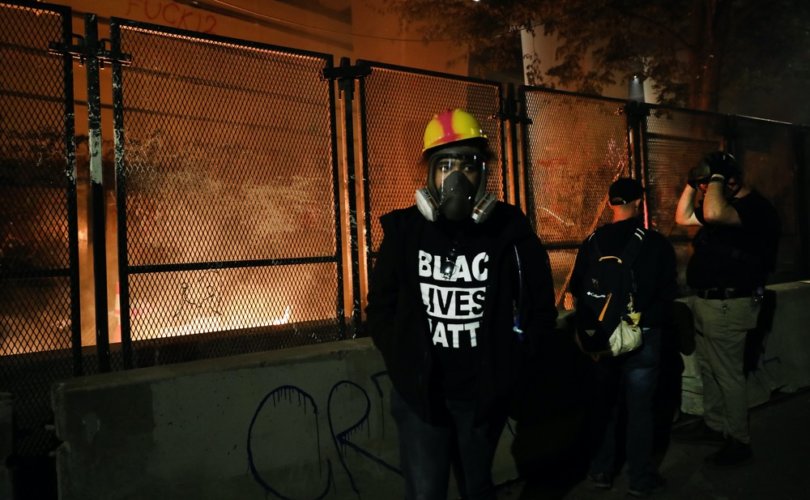 August 10, 2020 (LifeSiteNews) – A revolution rages in America. If an image could characterize this revolution, it would be the recent scene of burning the American flag and Bibles at one of Portland’s nightly riots.

The burning is a clear provocation, meant to offend and outrage. Its goal is to attack those things that still have meaning to countless Americans—God, country, family. The symbolic act communicates an incendiary desire to see these things reduced to ashes.

The Black Lives Matter (BLM) movement is the umbrella under which this is happening in America. Its militants circulate in these protests. The “black lives matter” slogan is painted and chanted everywhere by rioters. Greater New York Black Lives Matter president Hawk Newsome threatened to “burn down the system and replace it” should their demands not be met.

Why people sympathize with BLM

Most people think the BLM movement only deals with those suffering from racism. Many people sentimentally feel sorry for the victims of injustice and sympathize with the widespread outrage. Some may even be unaware of the Portland burning of the Bibles and the American flag.

These shallow BLM supporters excuse the violence as the excesses of those expressing their righteous anger against a “racist” establishment and police brutality. The media spin reporting on the protests to support this myth.

Very few take the trouble to dig deeper. Were they to do this, they would see that the BLM movement does not correspond to the mental image promoted by the media. BLM co-founders Patrisse Cullors and Alicia Garza are avowed and “trained Marxists.” They make no secret of their program to destroy America, as most know it.

Their radical goals can be found on the BLM website, and in numerous articles, tweets, and interviews. They extend far beyond the civil rights struggle of old. The BLM manifesto of beliefs wants to overthrow the present “racist” society and replace it with an egalitarian, socialist society that embraces all “oppressed” groups and identities — including class, gender identity, sexual orientation, and immigration status.

For example, the movement seeks to “disrupt the Western-prescribed nuclear family structure requirement by supporting each other as extended families and ‘villages’ that collectively care for one another.” Theirs is “a queer‐affirming network. When we gather, we do so with the intention of freeing ourselves from the tight grip of heteronormative thinking.”

Perhaps its most dangerous belief is its stubborn adherence to class struggle ideology, applying it to their cause. In this case, it reduces all problems to a “systemic” racism that must be opposed in all social structures and institutions. It creates a false division of society and puts all racial and identity categories at war with the present established order.

Thus, for example, the BLM movement wants to abolish policing and prisons as instruments of “white supremacist capitalist heteropatriarchal imperialism.” It targets all manifestations of capitalism as tools of oppression and seeks to defer and eventually abolish rent, mortgages, and utility fees.

Its religious position resorts to the endlessly recycled liberation theology that applies the Gospel to the Marxist class struggle narrative. Christ is turned into the redeemer of the oppressed against the oppressive establishment. Its co-founder Patrisse Cullors turns to old pagan rituals to ancestors and spirits for help in the struggle.

BLM’s idea of struggle also targets the traditional and hierarchical Church that it sees as a tool of white oppression. Thus, militants and sympathizers like Shaun King call for the overthrow of “white” Jesus representations, saints, and stained glass. All things that traditionally represent God and His moral law must go.

With such radical goals, it is hard to imagine why the public would sympathize with the movement. Yet more perplexing is the support of the “racist” establishment that BLM unequivocally wants to destroy. Sports figures, tech CEOs, and clergymen seem to trip over each other to see who can out-empathize the other in coddling the BLM cause.

BLM successfully framed the debate to elicit the support of the many Americans who are against racism. BLM and the left blame the sufferings of all black people on racism. Further, they made racism “systemic” so that only a radical change of the American system will yield results. No individual can do a thing about it, except to make amends for participating in the system. Americans are presented with the choice to either support the “anti-racist” struggle or risk being labeled racist. Like all leftist alternatives, the two options represent a false dilemma.

As long as this false dilemma is not denounced and rejected, the BLM cause will continue to advance.

Why the BLM narrative is wrong

Americans must quickly come to grips with the fact that this BLM narrative is wrong. It does not correspond to reality and will destroy Christian America.

What sinks Americans of any color into poverty is the breakdown of the family and moral living. America’s black community especially suffers from absent fathers, struggling single mothers, and children without stable and moral family lives.

This family and moral breakdown creates a cycle of poverty and suffering that makes it difficult, but not impossible, for children to be raised well. Generally, individuals of any race that establish a stable family life and faithfully follow the Christian moral code will prosper in American society. Study after study supports this conclusion. Any action to weaken these two things adds fuel to the fire of the frightful crisis inside the black community—and all American communities.

The BLM narrative is wrong because it takes this moral problem and turns into a racial one. In doing this, the misbehaving individual is absolved from the obligation to live morally and from all duties to family, community, nation, and God. All blame is ascribed to a racist system imposed by a white majority.

Yet worse, the BLM narrative is wrong because it proposes to destroy the institutions, traditions, and social structures needed to help solve the problem. Instead of strengthening the family, BLM aims to “disrupt the Western-prescribed nuclear family structure” in favor of more fluid ways of living together. Instead of working inside a proven system that brings prosperity, BLM proposes socialist and Marxist schemes that are all proven failures. Communism brought indescribable misery and death to hundreds of millions throughout the twentieth century and still does this today. BLM favors the LGBTQ+ agenda that subverts the much-needed traditional family structure. The movement supports abortion that kills black babies in the womb and destroys the moral fiber of individuals and communities.

The BLM narrative is also wrong because it does not reflect the true sentiments of the black community, which is religious, patriotic, and generally manifests greater disapproval of homosexuality than other groups.

The goals of Marxist movements are always the same. They want to tear down every manifestation of the natural moral law and establish an egalitarian and immoral society, in which individuals are not responsible for their actions. Ultimately, they revolt against God, Who is the author of this law. This is why Marxists attack the Church; the Church teaches people to know, love, and serve God.

America never was and is not perfect. But it does retain some precious remnants of Christian civilization. The greatest threat to America is the destruction of what remains of the Christian moral law. Should this occur, the nation will be overwhelmed by chaos. This danger imperils all America, not just the black community.  All America is in a state of moral decadence and suffers from broken families, shattered communities, and empty churches. Everyone, all races, should unite to fight these common evils. Instead, BLM pursues a policy of division, rage, and class struggle that endangers the nation in this time of supreme crisis.

Thus, it is no surprise that Bibles and the American flags are set on fire. They represent the order to be toppled in the revolution that is coming. Americans need to realize the media’s BLM spin is a big lie that must be rejected. The movement is radically Marxist and homosexual and toils for the destruction of a Christian America. The future of the nation is at risk. Only a return to God and His law can avoid disaster.