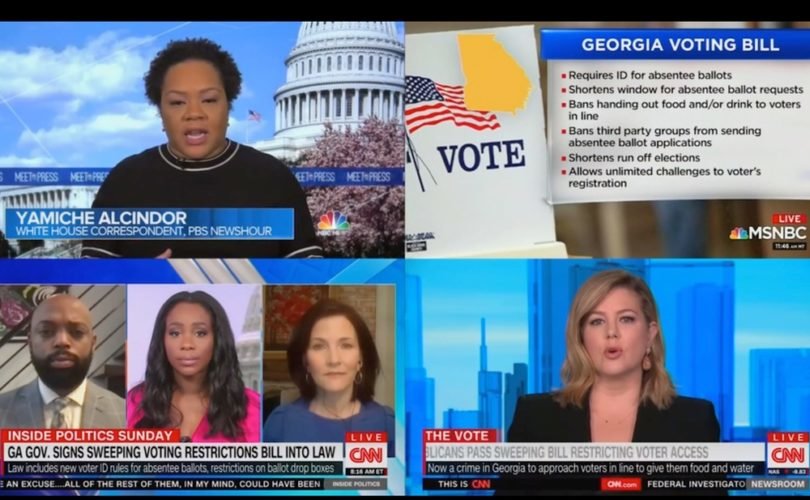 April 20, 2021 (NewsBusters) – TV journalists are carrying water for Democrats by framing the new Georgia election security law as a racist roll-back of voting rights. But they deliberately mislead audiences about the numerous ways in which the bill actually expands voting access in the state.

Watch the video below for a breakdown of how the media are failing in their duty to cover the new law fairly:

Here are some of the most common complaints about the bill you’ll hear from the news media:

■     Claim: The bill restricts ballot drop boxes. Before this bill was passed, Georgia had no law requiring ballot drop boxes anywhere in the state. Thus, the bill actually establishes drop boxes, rather than reducing them. While it’s true that the bill includes an upward limit on how many can be available in the state, this does not represent a reduction.

■     Claim: It creates new voter ID requirements. Voters in Georgia were already required to show ID in order to vote in person. This law simply replaces the outdated (and sometimes inaccurate) practice signature-matching for absentee ballots. Instead, under the new law absentee ballots are verified with a voter’s identification card number. And those cards are provided — for free — to any voter who needs one.

■     Claim: The law makes it illegal to give food or water to voters waiting in line. This change eliminates a loophole in existing Georgia laws against electioneering. In the past, there have been instances in the state of Democrat activists engaging in “line-warming” by handing out freebies to people waiting to vote. This change addresses that, while still allowing vendors to set up food trucks and all manner of refreshments outside polling locations — as long as they’re 150 feet away from the polls.

■     Claim: The bill is designed to make it harder for minorities to vote. This is the most absurd of the bunch. Aside from the media’s (arguably racist) suggestion that it’s unfair to expect people of color to own ID, it’s hard to get anyone to explain how this bill even targets minorities. That’s probably because it doesn’t. Obviously there is no provision in the bill that references race, or even alludes to it.