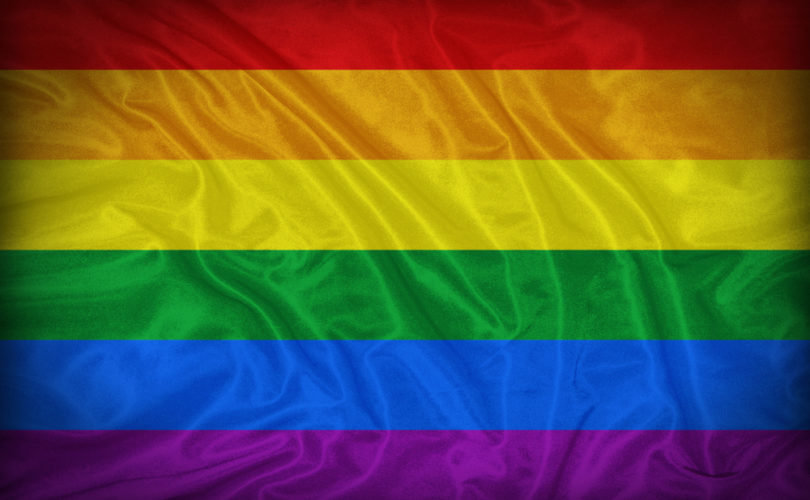 September 11, 2018 (American Thinker) – India has just legalized gay sex. This is roughly one-sixth of the world's population. A few years ago, this would have been unthinkable. What happened? An admission about homosexual influences, by a famous documentary, does much to explain society today.

We must first go back to the 1960s, to an amazing documentary by CBS, hosted by Mike Wallace, called “The Homosexuals.”

In the documentary, Mike Wallace noted that, as late as 1967:

Most Americans are repelled by the mere notion of homosexuality. A CBS news survey shows that two out of three Americans look upon homosexuals with disgust, discomfort or fear… The majority of Americans favor legal punishment, even for homosexual acts performed in private between consenting adults. “The Homosexuals,” (6:39), CBS, 1967, with Mike Wallace.

Not too long ago, people received severe sentences for homosexual behavior.

This man is twenty-seven, college educated… He has been in jail three times for committing homosexual acts. If he is arrested once more, he faces the possibility of life in prison. “The Homosexuals,” (6:03) CBS, 1967, with Mike Wallace.

Yet, within a generation, homosexuality became accepted, and today it is celebrated, almost as desirable and heroic. This would have been unthinkable, even in the 1960s.

I have also noticed older people, whom I have known for decades, change their attitudes. In the 1960s, they would have been one of those Americans who saw homosexuality as disgusting. Now, they are “tolerant.” The brainwashing seems to have worked retroactively.

Do not get me wrong! I am not advocating the recriminalization of consensual homosexual acts. Some of the laws back then were unnecessarily strict. But neither do I celebrate homosexuality as a good thing, something to be sought. I would have preferred the limited accommodation of decriminalization, and nothing more.

One could track further back to the Mattachine Society founded in 1950, or the drawings by Tom of Finland, the latter of which would become the inspiration for the Village People.

Simply put, without Tom of Finland, there would have been no Village People. – The Guardian

An amazing admission in the 1967 CBS documentary confirms what many have said under their breaths, and what other have suspected.

Homosexuals are discriminated against in almost all fields of employment, in all parts of the country. But in the world of the creative arts, they received equal treatment; indeed, some would say better treatment. There is even talk of a homosexual mafia in the arts, dominating various fields. Theater, music, dance, fashion.

In painting, there is the commonly expressed notion that the homosexuals influence has been corrupting:

In the fashion industry, many observers see an effort to blend the sexes, to defeminize woman, to replace curve and counter with sexless, geometric sterility… “The Homosexuals,” (31:05) CBS, 1967, with Mike Wallace.

If someone said that out loud today, they would be charged with hate speech and have their lives destroyed.

But the problem is not even limited to homosexuality.

If one were to watch fashion shows, with a discerning eye, one would wonder why so much of women's fashion has women dressed like boys. The women look almost androgynous.

This in not even a recent development

1920s women's clothing was also extremely androgynous, especially considering the flouncy skirts and cruelly exaggerated waistlines that had gone before it during the Victorian period. – A History Of Androgyny In Fashion

Now, obviously, it is not the models who push this. It is the fashion designers. The very ones that Mike Wallace said might belong to a “homosexual mafia.”

Neither am I a fulminating fundamentalist who thinks women should not wear pants. I think jeans look good on a woman, when they accent her curves and contours. I do not expect all women to look like the quasi-androgynous Twiggy of the 1960s or Kate Moss. And why would androgyny be pushed as the ideal, anyway?

Since the rise of Hollywood, and mass media, we have allowed our culture to be directed, and led, by a minority. Though it be politically incorrect to admit, it seems that a disproportional amount of these people are what many, in the 1960s, would have called sexually deviant.

With the advent of movies, they could influence the population, but only to a point. If they became too radical, the public would not pay for the tickets. With radio in the 1930s and 40s, there was no visual input. Androgyny does not translate well over AM.

With the introduction of visual TV in the 1950s and 60s, these creative professionals set the tone. Most of the public had no choice about what was broadcast. And since TV was ostensibly free at that time, there was no disincentive not to watch. An advertiser might balk if things went too far, but it was a process of erosion.

So within a short period from 1967 to 1976, the media could move the public to accept homosexual rights. Rod Stewart released “The Killing of Georgie,” a song about the murder of a New York homosexual, and it got major airplay, something which would have been unthinkable nine years earlier.

There can be no doubt that Hollywood and New York were the most influential centers of art in the Western world, though that may be changing. Leveraging this influence, the embedded “homosexual mafia” changed the United States, which then started the ball rolling to change the world. Hence… India, which has just legalized gay sex.

A small “homosexual mafia” has foisted itself on the planet, and quite successfully.

The key was their control of the media.

The present cultural war is over that control. The internet truly democratized the media, which is no longer centralized. Hence, Facebook and Twitter are now shadow banning.

What would have been unthinkable 50 years ago – and might have landed one in jail – is today lauded and heralded. And much of this is due to the influences of a small, unrepresentative community. What is amazing is how easily people have allowed themselves to be led, rather than think for themselves. This mafia should never have had this much influence.

Now that the internet has broken the monopoly of those creatives, they seek new ways to reign in the true liberty that would counteract them.

Donald Trump has angered feminists all over again, after a new report suggests that he has told the female staff of his administration that they need to always “dress like women” when at work. – The Telegraph

Trump is not destroying democracy, he is contesting with the minority who would.

Mike Konrad is the pen name of an American who wishes he had availed himself more fully of the opportunity to learn Spanish better in high school, lo those many decades ago. He runs a website about the Arab community in South America at https://latinarabia.com.