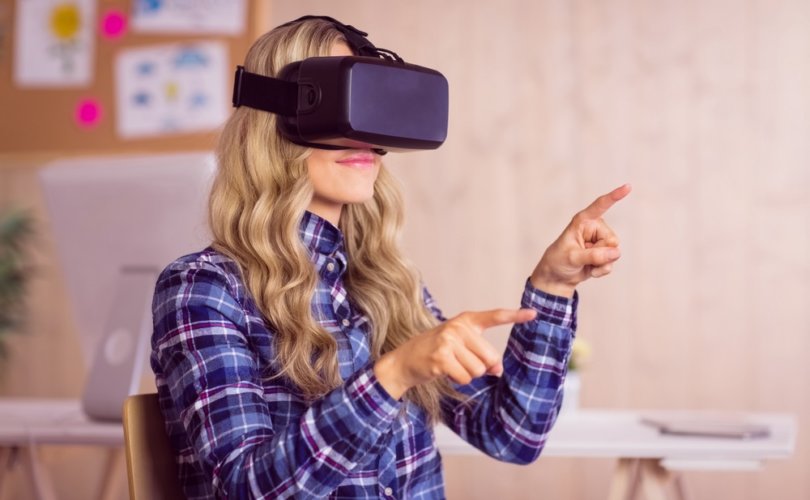 (LifeSiteNews) – The next step in the cyber-revolution is the so-called metaverse, a powerful computing platform that goes beyond anything seen to date. It is marketed as the next generation of the Internet, facilitating intense experiences and opening new markets. Some fear this metaverse will make present social media addictions worse. Others see it as a much more harmful distraction, especially among youth.

However, no one considers the moral implications of the project.  The metaverse will harm souls. Tragically, people see no reason to involve God and morality in a technological invention seemingly outside the private realm of religion. Worst of all, clergy show no sign of acknowledging the issue. It is not even on the radar.

However, the issue does exist. The metaverse is a metaphysical attack on the Church’s worldview. It obliterates the nature of a God-created universe. It will make possible immoral acts that will gravely offend God.

A process of imagining and destruction

The metaverse must be understood in the context of a process of modernity’s continuous effort to put humanity, not God, at the center of all things.

Indeed, modernity has an obsession with imagining new worlds without God. The Enlightenment introduced ways to stretch reality to its limits by developing new technologies, philosophies, and lifestyles.

Modern times have ushered in the glorification of the individual. Society became a collection of persons, Hobbes’ “sandheap of individuals,” each guided by self-interest and kept in order by a strong rule of law found in his Leviathan.

Thus, modern individualism tended to destroy the external structures – tradition, custom, or community – that encumbered self-interest. It destroyed many moral mechanisms that facilitated the practice of virtue in common. It created a fast-paced order in which man became the center of everything, and religion was relegated to being a private matter.

Modernity’s order was shattered by the postmodernity of the 1960s, which proposed freeing the imagination and removing all moral restraints. Postmodernism took individualism to an extreme through the use of new technologies, philosophies, and lifestyles. Society was turned upside down by psychedelic drugs, rock music ,and the sexual revolution.

By the same logic in which modernity idolized self-interest, the postmodern individualist makes the “right” of self-gratification the only absolute right – even when such behavior is self-destructive. The postmodern individualist seeks to destroy those internal structures – logic, identity, or unity – that impede instant gratification. Postmodernity’s “deconstructed” narratives isolated individuals even more and drove them to create their own realities outside of God and His morality.

However, modernity and postmodernity were still somehow anchored to an external reality that people could not escape entirely. There were physical and ontological limitations that kept the imagination in check. A man might self-identify as something he wasn’t, but the desire did not alter the reality. Further, his imaginings were not evident to all around him.

The introduction of the metaverse is now changing this difficulty of altering reality. It is part of what many futurists call a Fourth Industrial Revolution.

Following the footsteps of modernity and postmodernity, the next step in the process is self-imagining outside reality. The obstacles that stand in the way are the present manner of perceiving nature, existence, and being.

This next wave of innovation and technology will allow individuals to immerse themselves in a world of their own creation. People will become avatars, that is, cyber-representations of men, women, animals, or things that “live” in the cybersphere. They will be capable of being wherever they want—be it on the moon, on top of buildings or “in a field of unicorns.” This platform can be inhabited by extraterrestrials, angels, demons, or anything following the fantasies involved.

People will do superhuman things where acts will seemingly have no consequences. While it will not change what exists, it powerfully creates the lie that one’s imaginings are more real than reality.

This massive virtual platform is much more than an extension of the Internet, which allows people to look into the world wide web. This phase will “embody the Internet by putting people in the middle of it.” In this new realm, imagination rules.

This project is not the stuff of science fiction anymore. It is discussed in establishment media like The Wall Street Journal. All the social media companies are putting the pieces in place. Mark Zuckerberg just renamed Facebook, calling it Meta. He will be investing $10 billion and hiring 10,000 new employees to build this new world.

“The metaverse is going to be the biggest revolution in computing platforms the world has seen—bigger than the mobile revolution, bigger than the web revolution,” says Marc Whitten of Unity Software in a Wall Street Journal feature article.

It proposes a three-dimension parallel universe of virtual and augmented reality where digital avatars will meet together in unlimited numbers. People will be fitted with specialized glasses and even advanced haptic gear, which will allow them to feel and touch remote things in real-time. They can mix the real world with the imaginary one.

Daren Tsui, chief executive of Together Labs Inc., says: “The avatar experience will feel so real that you can hardly tell the difference between a virtual meeting and a physical meeting. And the virtual experience will be better.”

Creating a world of illusion without consequences

There are three major problems with the metaverse.

The first one is that it encourages people to detach themselves from reality by creating a delusional world without consequences or meaning. People are free to defy nature by doing impossible things, like walking on the moon or watching a baseball game from the pitcher’s mound. The most absurd things become possible inside an imagined world unmoored from reality.

People are no longer bound by time and can travel what they imagine is the past or future. Even death is overcome with avatars and algorithms conspiring to bring back what will appear to be deceased relatives or historical figures with which one can converse and interact.

People are free to do things to others (who may or may not exist) or even cut off their arms without consequences. Every fantasy, even the most macabre, can become a reality in the metaverse. It will thus open up dark and sinister spaces that will facilitate sinful acts or their simulations.

Such a lonely world disconnected from reality and the nature of things can feed the unfettered passions that hate all moral restraint. A space like this can quickly go from Alice in Wonderland to insane asylum. The frenetic intemperance of the present Internet and social media are already causing psychological and social problems. How much more exponential will be the metaverse’s abilities to drown people in their frenzies and depressions?

The destruction of identity

The second reason to be concerned about the metaverse is that it equates identity with choice.  The postmodern paradigm already allows a person to self-identify as something else. However, that identification exists only in the mind of the deluded person. The public can generally perceive the illusion.

This lie of identifying the self with freedom is made possible by the metaverse. Existentialist philosopher Jean-Paul Sartre wrote that “man is freedom,” which makes people essentially limitless. In his book Being and Nothingness, Sartre said that “Freedom is nothing other than a choice that creates for itself its own possibilities.”

The metaverse is the realization of this distorted idea of freedom that revolts against the contingent limitations of human nature. It seeks to turn individuals into the gods of their fantasies.

The demolition of metaphysics

However, the most dangerous aspect of the metaverse is its demolition of the metaphysical vision of life that leads the soul to the Creator.

Everyone, even children, engages in metaphysics. Human nature and especially the soul demands a rational understanding of self and the universe. Thus, a classical definition of metaphysics is a philosophical inquiry into ultimate principles and causes. By engaging in metaphysics, individuals seek out the nature of things that exist and fit them into a coherent vision.

A true vision of things makes painfully clear the finite and contingent nature of every human being. However, through an understanding of the designs of Creation, people see that the goal of existence transcends physical and social limitations. They pursue this path to the Creator as reflected in nature. This process confers meaning and purpose on life as souls strive toward their final end in God.

The philosophies that inform the metaverse are contrary to this classical metaphysical vision. There is no attempt to understand the nature of things but only the limitless experience of random events. This “transhuman” notion of the world understands humanity as a process in constant evolution. “Great Reset” engineer Klaus Schwab describes this next phase as the coming “fusion of the digital, biological and physical worlds.”

The idea of the metaverse is consistent with the outlook of New York Times bestselling author Yuval Noah Harari. A frequent writer on these subjects, he openly envisions a future without the soul, free will, a unified self or God. His is an algorithmic world of random experiences where one is whatever one comes to be. He holds there are no religions but only powerful fictions, like the metaverse, where people will “create entire virtual worlds complete with hells and heavens.”

The author is not alone in believing in this chilling future. He speaks for a progressive class of scientists, businessmen and scholars from Big Data and Silicon Valley, who are all on board with the task of changing human nature and reality through artifices like the metaverse. They make no secret of their rejection of God’s Creation and moral order.

The need for rejection

These are urgent concerns in the face of the coming metaverse. Not all its applications will contain the full dose of these destructive plans for humanity. However, the general direction is leading to a brave new world without God. Such conclusions do not come from conspiracy theories but are openly revealed the metaverse’s promoters.

Thus, the metaverse must be rejected because its worldview is contrary to that of the Church. It is afflictive that something this big can appear on the horizon, and the shepherds of souls have so little to say about it. In today’s godless society, the apostasy from the practice of the Faith is caused much more by technological inventions like these than abstract theological disputes.

Equally afflictive is that people do not wish to see where this will lead. History shows that when people give free rein to their passions, it ultimately ends in nihilistic despair. The overwhelmingly intemperate experience of metaverse pleasure will eventually demand the more intense sensations of existentialist pain. Thus, modernity’s process of decay will run its full course: From self-interest to self-gratification to self-imagining to self-annihilation.

Indeed, a world dominated by delusions, absurdity, and the denial of being, where meaning and purpose are obliterated and bizarre fantasy rules must be called by another name. The secular visionaries of the metaverse are designing a virtual Hell on earth.

John Horvat II is a scholar, researcher, educator, international speaker, and author of the book Return to Order, as well as the author of hundreds of published articles. He lives in Spring Grove, Pennsylvania, where he is the vice president of the American Society for the Defense of Tradition, Family and Property (TFP).