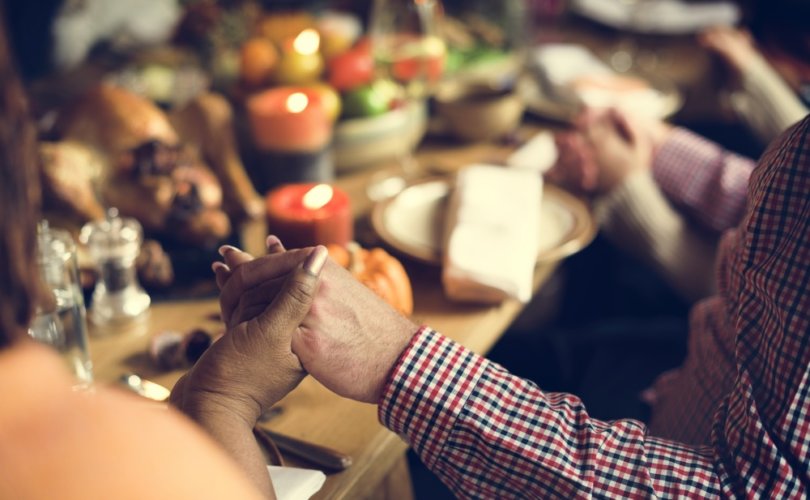 (LifeSiteNews) – After nearly three years, you have finally gotten all the friends and family together for a big festive celebration of thanks for the Lord’s blessings. The large dining room table is set with the extension leaf in the middle, and a card table pushed up to the end for the kids. You all clasp hands and you ask that we go around the table before the prayer, and each person say one thing he or she is thankful for this Thanksgiving.

Little Sally is thankful for puppies. Boisterous Billy is thankful for bacon and Pokémon. Uncle Tom thanks the Lord that the lockdowns are done, and he can travel again for his business which has been struggling. Aunt Jane is thankful that none of the unvaccinated in the family died of COVID. You squeeze your spouse’s hand, turning it white. Grandpa Fred, who is unvaccinated, opens one eye and growls, “What the heck is that supposed to mean?” You think to yourself, “and here we gooooooo.”

Thanksgiving for many families is like a grand embassy, with dignitaries from many different nations sending emissaries, to discuss relevant events that have affected relations, and attempt to form new trade agreements or treaties to stop hostilities. No greater event has affected inter- family, friend, and political relations across the globe, since World War II, like COVID has. Many “trade agreements” have been broken. Hostile actions have been taken, and real, quantifiable harm has been endured by and given to people who are made in the image of God.

At some point, every family, church, social group, or nation is going to need to confront what has happened. Every single one. Just as Germany couldn’t let the Nazis pass like water under the bridge, neither can COVID be forgotten and brushed aside. But just because it can’t be forgotten doesn’t mean it can’t be forgiven, mended, and healed. Bitterness rots the soul, but forgiveness restores it.

Grandpa Fred and Aunt Jane have officially opened the wound, and laid bare the grievances. How should you handle it? It will not be easy. There is bound to be raised voices and tears. Kids will be confused. Some relationships may end, but others, by the grace of God, can be saved. I cannot tell you how you should handle the “bomb” when it drops – and it will – but I can tell you how I handled it, how I am handling it, and how I will handle it with those who have not yet brought it up.

Just as I was a very early opponent and enemy of the LGBT gender lies and abuses in public schools, since about 2015, I was very much against the COVID lies since day one of the first lockdown in March of 2020. I was so vocal early on that I got a private message from Facebook saying they were assigning me a “hall monitor” of sorts. That was just the first of many “trials” that I have endured since then. My position did not go over well in many of my relationships.

Just in my personal experience, I have had two family members and one friend die allegedly “mysteriously.” A half a dozen friends have had serious health complications. My church of 13 years, with whom my family never had a dispute with in all that time, told us to leave one Sunday morning. I got laid off from my old job. My father was escorted out by security three months before his retirement. My kids had to be pulled out of school and home-schooled. I was threatened with thousands of dollars in fines. This put incredible strain on my wife and kids, pushing us to the brink. But the Lord is my Vindicator, and my vindication is coming each day, with each new report exposing the lies that were pushed the last three years.

My experiences are not unique. Millions have similar stories to mine. Hundreds of thousands have died because of the wickedness that was pushed and continues to be pushed. I can’t become bitter, but I can’t just “forget about it” and devalue the lives of the people who have been harmed. I have been feeling great conviction to reconcile with as many as I can. Although I was technically the victim, I thought the best way to move forward was for me to extended the olive branch first, for me to make the first overture towards peace.

With my church, who asked us to leave, it was clear that they were not going to contact us. It had been more than a year, and no one had tried to reach out to us. I decided to call up the elder who had asked us to leave that Sunday, and invited him over for coffee. When he stopped by, we had a good long conversation, and we discussed the specific issues that he and I had had. I was direct, but polite. I also prepared beforehand, through prayer and study.

If you wish to explain why you had a falling out, and what you think the offense was, you need to be able to concisely and cohesively explain the grievance. You also need to make sure you are in the right. Nothing would make matters worse in accusing another of wrongdoing than to be the one who was actually in the wrong, or to say something inappropriate because you were not prepared for a counter argument or reasonable justification. Ask God for wisdom. God has promised to give wisdom freely to anyone who asks.

While this meeting didn’t immediately fix everything that happened, it opened the door, and has allowed other discussions with other elders, which has led to apologies, and greater understanding. The relationship is being rebuilt. It might be slow-going, but I am hopeful. This, I think, is how we move forward: it forces us to confront the issue, instead of pretending like nothing happened. Both parties have to consider their actions, and determine if they have anything that they did that requires reconciliation. If the other party chooses not to accept your olive branch, than you have done everything possible to fix the situation. You are not responsible for their actions, only your own.

By having the meeting, and confronting the flying pink fire-breathing elephant in the room, you force yourself to evaluate if it was you who committed the offense, or the other party. If neither party can see any wrongdoing, then either it wasn’t worth fighting over, or reconciliation is not possible, and you should dust off your sandals to the relationship. As any good recovering alcoholic can tell you, if you can’t acknowledge you have a problem, then you can never fix the problem.

If the other party doesn’t want to meet up, don’t be discouraged. It is very difficult for an individual to admit he was duped by the most sophisticated and well-organized scam in human history. Admitting to having been duped can cause mental anguish, as well as feelings of humiliation and shame. Some people will take time, and others will need compassionate understanding and coaching. Have patience, show love and concern, and above all, be willing and ready to forgive. Forgiveness, after all, is your responsibility.