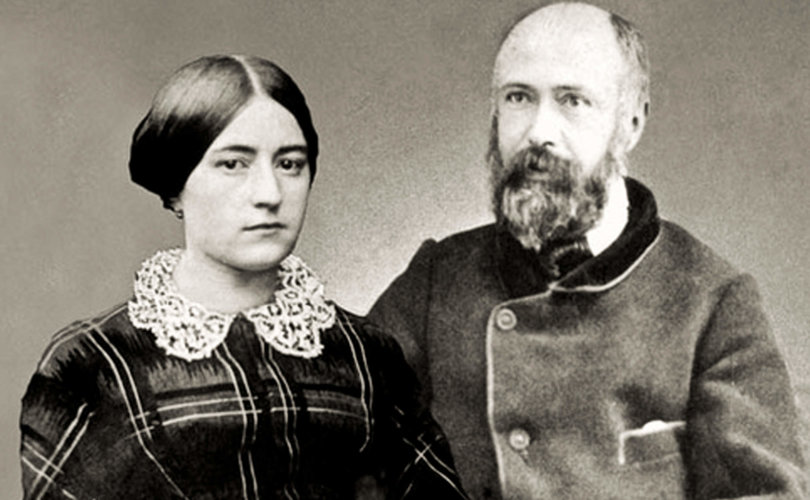 April 20, 2016 (ALL) — When we think of saints, we often imagine bearded monks, serious nuns, and founders of religious orders. But we forget that married people are also called to be saints. The canonization of Louis and Zélie Martin on October 18, 2015, was the first time a married couple was recognized together as saints in the history of the Catholic Church. As the parents of Saint Thérèse of Lisieux and four other daughters who consecrated their lives to God as professed sisters, Louis and Zélie can teach us a lot about what it means to live a culture of life and how to be faithful to God’s will in all things.

Though both Louis and Zélie, individually, tried to become consecrated religious, God had other plans. Both were rejected from their chosen spiritual retreats and forced to live in society. Louis was a clock and watchmaker who desired nothing more than to be left alone in his shop to contemplate the mysteries of God. Zélie was a sensitive young lacemaker who understood the need to raise children in the wisdom of God. A chance passing on a bridge and the intervention of Louis’ mother formed a close bond between Louis and Zélie that soon led to marriage. Together, Louis and Zélie Martin showed their children how to live in the secular world without being tainted by it.

Louis and Zélie Martin show us the beauty of the vocation of marriage and how marriage is the foundation of society. As a family, the Martins lived out a culture of life in their daily activities. From an early age, Louis and Zélie taught their children to help people who were less fortunate and to take care of the poor and the sick in their own community. The Martins centered their lives on Christ, using their daily family prayer as a time to think and reflect on how they were serving God each day.

The lives of Louis and Zélie teach us about suffering and how to turn our crosses into steps toward heaven. Louis and Zélie buried four of their children, two sons and two daughters, all of whom died in infancy or early childhood. Zélie suffered from cancer and was unable to nurse her own babies after they were born. When St. Thérèse was only four years old, Zélie died, leaving Louis to care for their remaining children.

Learning to trust in God

Without their mother to guide them, the Martin sisters helped each other follow the Blessed Mother’s example of holy womanhood. It was this early grounding in faith and their trust in God that helped the Martins weather their trials and discern their vocations. All of the surviving Martin children joined religious orders. Thérèse, Céline, Marie, and Pauline joined the Carmelites, while Léonie joined the Visitation Sisters.

Like any parents, Louis and Zélie Martin had big dreams for their children. They wanted their children to all become saints and ambassadors of the gospel. They spent time grounding their daughters in the truth by giving them a solid Catholic education and formation. The Martin sisters grew up understanding that every human being is a gift and that we each have a duty to care for the poor, the sick, or the marginalized people around us, even beyond the cloister wall.

The Martin family shows us that building a culture of life and preparing your children to become saints is a daily commitment to respond to the universal call to holiness. Louis and Zélie spent time with their family leading their young daughters in activities that built their characters and taught them valuable lessons about the inherent dignity of every human person.

Parents play an incredibly important role in building the culture of life. Not only must they remain open to God’s gift of life in their children, but they must also take on the responsibility of raising their children to follow God’s law and serve others. Children follow their parents’ example when it comes to living a life of holiness.

How can you exemplify the culture of life for your children?

Laura Kizior is a content developer for American Life League’s Culture of Life Studies Program, which stresses the culture of life as an integral part of every academic discipline. CLSP is dedicated to helping students become effective communicators of the pro-life message. Sign up for our e-mail newsletter to see how we can help you foster a culture of life at home and in school. Reprinted with permission from American Life League.