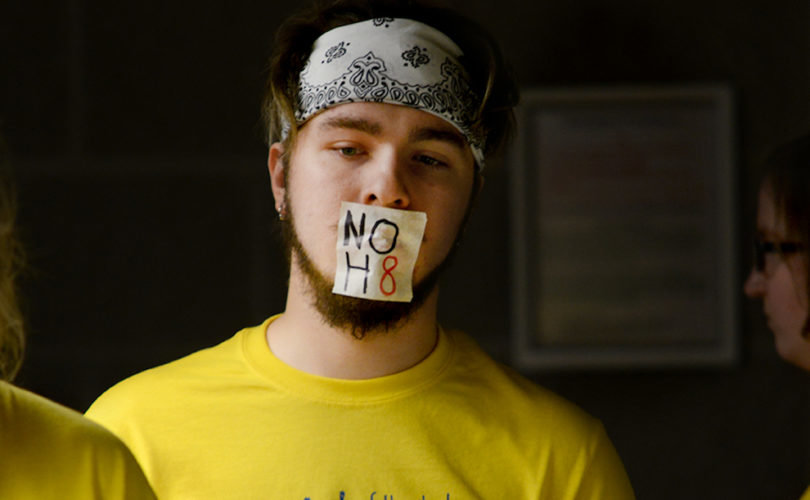 April 13, 2016 (MassResistance) — On Friday, April 15, high schools (and many middle schools) across the country will be hosting the LGBT movement’s annual “Day of Silence.”

During this all-day event, student activists and even school officials encourage students to be silent for the entire day as a sign of solidarity with the international LGBT movement. Students are encouraged to wear special pro-homosexual badges, stickers, and bracelets — which are often handed out at the school entrances that day. There are also pro-LGBT posters in the hallways, handouts, and even workshops.

Getting young people to identify emotionally with the overall LGBT movement (going beyond just the “sexual orientation” issue) is very important to the national activists. Besides schools, “Day of Silence” events are also held in colleges and even some workplaces.

As with other LGBT programs, in recent years the Day of Silence organizers have shifted their psychological tactic from the “Civil Rights” metaphor (which was not resonating much with kids) to the “anti-bullying” agenda, as a more immediate and emotional vehicle emphasizing victimhood – and intimidating possible critics into silence.

As usual, although the adult activists claim that the “Day of Silence” is put together by “students,” it is in fact organized behind the scenes by adults with the enthusiastic cooperation of school officials. They use materials and instructions from the national homosexual activist group GLSEN — which is funded by major US corporations.

Make this a pro-family opportunity: Just say no!

Usually the real victims are those who don’t agree with this bizarre agenda and are pressured into their own silence. But this can and should be made into an opportunity to effectively fight back.

These radicals want to turn the school into a political battleground for a day? We say: The First Amendment goes both ways. Use this to make your own powerful “silent” statement.

There are two approaches that families can take. On Friday, April 15, pick the one that most suits you and your children:

Approach #1 – Stand up to the bullies. Subtle but effective!

Contrary to what LGBT movement tells children, this is really about a sad, destructive, and addictive behavior that brings brokenness, disease, and psychological trauma. And sadly, young people are the most vulnerable. Because this behavior is fundamentally unnatural, the web of lies can only be maintained by a constant campaign of forced acceptance.

But even just wearing a subtle sign on your shirt or sweater can make all the difference. It silently says that you’re not buying it, and they’re not intimidating you. Totalitarians cannot abide by any dissent. The rainbow is their universal sign of forced acceptance. Wearing this on the “Day of Silence” will drive them crazy.

And since they will be passing out their propaganda, you can pass out some truth. Trust us, the truth is the most powerful weapon you can bring to this battle.

Here’s what we’ve been providing parents and students to give out:

Of course, this is useful throughout the year, not on just one day! And do not let school staff or administrators threaten your free speech rights on this issue, while letting the LGBT activists do and say whatever they want to your children. Contact MassResistance if you are confronted or threatened.

Approach #2 – The Day of Silence Walkout!

There are many parents and their children who strongly object to the “Day of Silence” onslaught, but just want to stay away from the whole thing. Their option is to keep their kids home that day. We endorse that approach also.

For several years, the Illinois Family Association has teamed with dozens of pro-family groups across the country (including MassResistance) to encourage parents to keep their children home from school that day. That also sends a powerful “silent” message to the schools and the activists!

Called the Day of Silence Walk Out, it has its own website that tells parents to “Keep your children home on the Day of Silence,” and has a lot of other good material, instructions, and background material. Lots of parents across the country use this. By all means, look into this.

If you have kids in the schools, we strongly urge you to do one of these. Like all totalitarian movements, the militant homosexual movement feeds on people’s fears and capitulation. If you show them that you’re not afraid and not cooperating, it makes a tremendous impact.

In addition, all parents are strongly urged to contact their school administrators and object to this event.

How to get your “no-rainbow” stickers

We definitely want people to use these stickers. There are two ways to get them.

During the entire month of April, with every donation to MassResistance (including ones already made) we will send you three free stickers.

If you want to buy them in larger quantities, we will sell them for $1 each (at least until April 15) including shipping. Contact us at 781-890-6001 or email us. (We’re still working to set up an online shopping cart.)

Be a part of the counter-revolution!