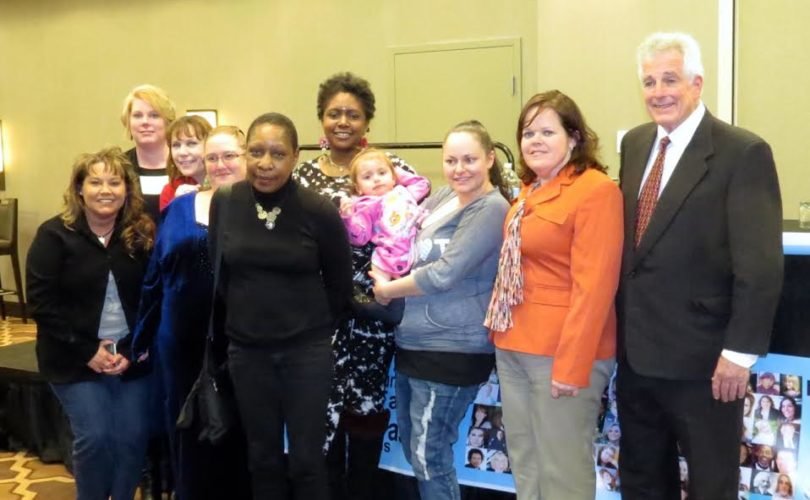 Men and women who were conceived in rape speak holding a panel in Washington, D.C., on January 20, 2015, urging an end to rape exceptions in legislation.Pete Baklinski / LifeSiteNews

Whether doing “Choice” Chain, the Genocide Awareness Project (GAP), dropping anti-abortion postcards, or doing a presentation, there is one question that never fails to appear and reappear: “What about rape?” When sitting next to people on airplanes, getting a haircut or getting a cavity filled at the dentist, we are asked about our job as pro-life activists, which inevitably leads to the question, “Well, what about rape?”

It’s always there. It’s the first and last question that you need to know how to answer, intelligently and compassionately. After all, in an airplane there’s no place to go, and the hairdresser and dentist both have the advantage with sharp instruments being perilously close to main arteries.

Before responding, you need to have an idea of how much time you have. If you know that you have minimal time to respond, you need to find common ground quickly and then jump straight to a powerful question. For example, at a High School “Choice” Chain,

One of my colleagues was asked by an angry student, “What about rape?”, just as the bell rang, signaling the end of lunch hour, and subsequently, the end of “Choice” Chain. She found common ground by saying, “Rape is horrible, and I think that rapists should get tracked down and prosecuted to the full extent of the law,” she paused to let that sink in, and then continued quietly, “is it fair, though, in a country that will not give the guilty rapist the death penalty, to give the death penalty to the innocent child?” It’s a powerful question, and when you don’t have time to go more in depth, it’s food for thought.

There’s another question, too, that you can use when your time is limited and you have abortion victim photography with you. At GAP last year, someone told me that he didn’t think abortion was okay unless the child was a result of rape. I turned and pointed to the large billboards behind me and asked, “Which one of these children was conceived in rape?” He studied the pictures and looked uncomfortable. “I can’t tell,” he admitted, “they all look the same.” That was the point, of course. They are all human beings of infinite value, regardless of how they were conceived.

Other days, you may have a bit longer, and that’s when you can trot out the toddler. I was talking to a two teenage girls one day at “Choice” Chain, and they agreed after seeing the images that abortion is an act of violence. However, they both brought up the circumstance of rape as their main exception. “Well,” I began, “rape is horrible. I couldn’t imagine what it would be like if I was raped, and I can’t even begin to think of how I’d feel if I got pregnant from it.”

They were nodding, emphasizing to me how important it is to form common ground. I needed to show that I cared, that I recognized that women who have been victimized suffer trauma that is inconceivable to myself.

Then I continued with an analogy. “Imagine this, though. A woman is raped a day after having sex with her husband. When she discovers that she is pregnant, she is uncertain of who the child’s father is. She decides to carry through with the pregnancy, and after the child is born has a paternity test done. The father is not her husband, it’s the rapist, and she is so overcome with horror that she can’t even look at the child, so she drives to a bridge and throws the baby into the water. Do you think what she did was okay?”

The girls looked horrified. “Of course not!” One of them burst out. “She’s not allowed to just kill her baby.”

Of course, this often leads to the answer, “Well, that’s different. A fetus isn’t a human being like a baby is,” and that means you’re right where you want to be: discussing the humanity of the pre-born child.

Discussing the rape question isn’t easy. I know that I, for one, have more difficulty with this question than with any other, mainly because when I try to put myself in the shoes of a woman impregnated through rape, I can see how, blinded by inconceivable pain and terror, abortion would seem like the best way out. But that’s just it, it would seem like the best way out. In the end, compounding an injustice does not provide retribution. One victim has suffered immeasurably, and abortion won’t magically take away that trauma. Her right to choose was brutally torn from her, should we compound the injustice by allowing her living, growing child to be brutally torn from her womb?