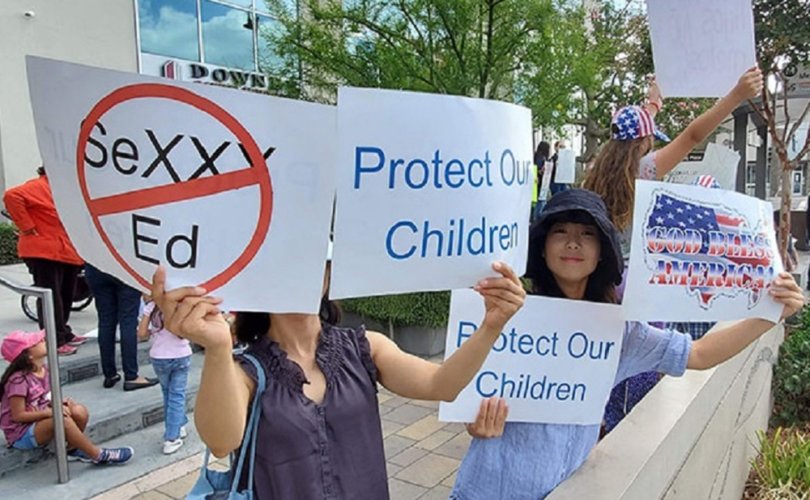 DOWNEY, California, May 6, 2020 (MassResistance) — Downey, California is largely a minority, working-class suburb of Los Angeles. Last year the School Board overwhelmingly voted to bring in a “comprehensive sex ed” curriculum for the middle school and high school grades.

This decision was largely to comply with the so-called “California Healthy Youth Act” passed by the Legislature in 2015. It requires comprehensive sex ed in schools. However, the text of the law allows for a fairly broad implementation (and mostly requires that anything taught be “medically accurate” and “age appropriate”).

But the Downey school officials selected one of the most extreme and offensive courses available. They chose to use “Teen Talk,” a slick, pre-packaged Planned Parenthood-linked program. Like similar programs created by Planned Parenthood and LGBT organizations, it pushes the normalization of homosexuality, transgenderism, pre-marital sex, various deviant sex practices, abortion, and other social pathologies.

It was all very devious. After the school officials selected “Teen Talk,” parents were upset with the phony “public vetting” process that revealed little about the curriculum — and the school refused to make the content details public. So the parents asked MassResistance to help them.

On Sept. 9, 2019, the Downey School Board voted 6-1 to implement “Teen Talk,” despite the pleas of parents who came to the Board meeting to try to dissuade them.

Parents were particularly upset that they hadn’t had a chance to actually see the curriculum, only a sanitized version that the school officials had presented.

That needed to change. On September 19, Arthur Schaper of MassResistance scheduled a meeting at the Downey School District main office. He insisted that someone from the public should be allowed to view the curriculum and also photograph any part of it to show others. After some strong initial pushback, the Downey administrators agreed to allow it. (NOTE: Many people would have just given up and not insisted!)

What Arthur uncovered was even more bizarre, graphic, and offensive than we had expected. It was some of the worst LGBT sex-propaganda that we’ve encountered. MassResistance published numerous photos and text and also distributed a report on it to local Downey parents. (See more detail on “Teen Talk” here and here.)

When parents saw this, they were more outraged than ever.

As upset as they were, the parents felt helpless as to what to do about it. The Downey School Board members are as entrenched in their positions — and disconnected from parents — as one could imagine. Most of them have been in office for decades. One has been there since 1979 — 40 years! Plus, they rarely have had opposition in their elections. They are used to doing things their way and not being questioned by their largely Hispanic constituents.

We formed a Downey MassResistance chapter, which quickly began to grow! Led by Sandi, a local mother, the new chapter got right to work alerting, educating, and organizing people across the city. They were thorough and relentless:

– They leafletted outside of public schools. The flyers described the curriculum and invited parents to get involved.

– They held meetings to educate and mobilize parents. The meetings were in churches and other venues. They also included pastors, local businessmen, and community leaders.

– They staged sidewalk demonstrations. Parents demonstrated and held signs outside the offices of a local state legislator (who had voted for the California Healthy Youth Act).

– They canvassed door-to-door and at public venues. The flyers, in both English and Spanish, identified the local School Board members who voted for the “Teen Talk” curriculum and were up for re-election in 2020.

Residents across the city were very receptive to our message. People were shocked that their school district would implement a sex-ed curriculum that was so explicit, vulgar, and inappropriate. Many eagerly signed up to get involved. Several immediately began contacting their School Board members by phone and email.

Parents storm the School Board meetings

In addition, starting in September, large numbers of local MassResistance parents began coming to School Board meetings to demand that this toxic curriculum be stopped. They held signs inside the chambers, and also outside, and gave strong, impassioned testimony directed at the Board members and school administrators.

Here’s what the parents demanded: Repeal the decision to use “Teen Talk” and instead create a course in-house that satisfies the bare minimum state requirements (e.g., be medically accurate and age-appropriate, etc.) and is not offensive to parents. It definitely must not include medically false LGBT propaganda on “sexual orientation” and “gender identity.”

The “Heart Curriculum.” Parents were also suggesting that Downey consider a sex-ed curriculum called “The Heart Curriculum,” written by an Orange County–area pro-family man along with a committee of conservative health professionals. The Heart Curriculum was written to be compliant with the Healthy Youth Act. We had some concerns that the Heart Curriculum seemed a bit compromised on issues such as moral judgments, abortion, same-sex attraction and so-called gender identity. But it’s a big step in the right direction.

An attorney from the pro-family legal group Pacific Justice Institute also came to a Downey School Board meeting to testify that the Heart Curriculum satisfied the CA Healthy Youth Act. He also sent the Board an official letter attesting to that.

A prolonged battle. For months, the Board members refused to address the subject. Several parents requested individual or group meetings with their Board members, which is quite common. But none of the Board members would even agree to meet with parents and talk about it. So as the months went by, the parents kept up the pressure.

Victory: The Board finally caves in!

By all accounts, the Downey School Board has never experienced this level of outrage from the community.

Finally, the School Board decided they’d had enough. It may be that they had heard that MassResistance parents were considering protesting outside of their houses in order to persuade them to meet with constituents on this. But it’s likely that they decided that the fight was no longer worth it, even though many of them probably receive political support from Planned Parenthood and other liberal groups.

In March 2020 (although there was no formal Board vote) the administration notified parents that the Downey school district was not going to use the “Teen Talk” curriculum. As the MassResistance parents had demanded, a new curriculum will be written by a committee of school staff. Although the committee will not adopt the Heart Curriculum, we were told, it will at least include the author of the Heart Curriculum as a committee member, which MassResistance had requested.

In a subsequent email to Sandi, the Superintendent admitted that the parents’ appearances at the School Board meetings had an impact. He wrote, “we ultimately are revising the curriculum as a result of your input.”

It’s a BIG victory! This is the first time we have seen a School Board — especially an entrenched liberal one whose members likely get political support from Planned Parenthood — capitulate to parents on this issue!

One problem still to resolve

There’s one problem that still needs to be resolved. And we’re confident we can fix this one, too!

In early March, Sandi and the other MassResistance parents were told by an Assistant Superintendent that no actual Downey parents would be allowed to be on the new sex-ed curriculum committee. It would only consist of sex-ed teachers, members of the school administration, and the author of the Heart Curriculum. We were shocked to hear that!

He said that Downey parents will not even be allowed to see the curriculum at all until it’s finished. Parents could then “review” the curriculum and “give feedback on it.” That’s the same phony process that the school used for the “Teen Talk” curriculum. It’s basically designed not to give parents the information they need or any ability to affect it.

He also told us that the new curriculum will be including information “that parents will not be happy with” because “it’s the law and it must be included.”

School districts across the country that write their own sex ed curriculum routinely include at least a few parents. Even a neighboring district to Downey recently did. When Sandi asked the Superintendent why Downey couldn’t also let parents be part of this process, she got an absurd response:

That is simply a ridiculous answer. We suspect that the real reason is that other school districts purposely pick only left-leaning parents for those committees — and the Downey administrators know they won’t be able to get away with that this time.

MassResistance parents are confident they will break through this barrier, also!

We strongly believe that with a tough strategy and by not giving up, parents can win virtually any “culture war” battle with school officials.

But in the larger sense, it’s a sad and frightening situation when local parents can’t trust their own School Board or the teachers and administrators in their schools to present a course to their children that does not include disgusting sexual perversion. As repulsive as “Teen Talk” is, it was enthusiastically approved by all the people who are counted on to protect children. They are simply bad people. They should be repulsed by it and refuse to have anything to do with it.

That is the battle across America (and beyond) that parents are fighting. The people doing these things to children aren’t just “misguided.” We are up against evil. Unfortunately, it often seems that MassResistance is the only pro-family group that understands this.