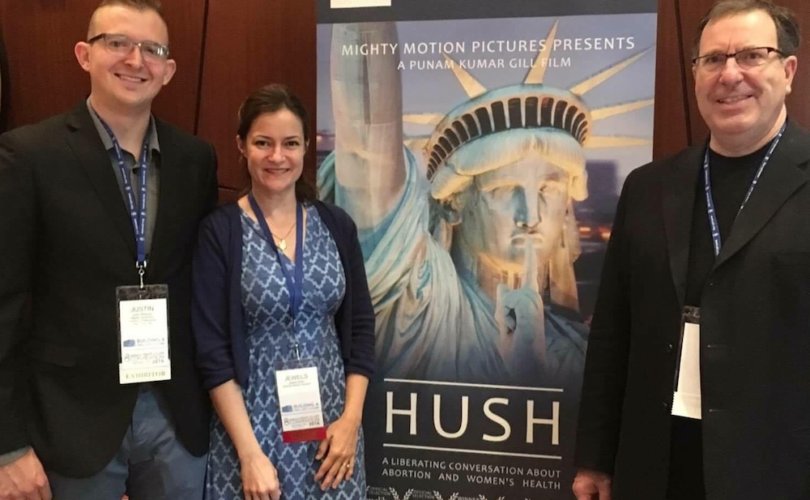 Aug. 1, 2016 (LifeSiteNews) — When I was 6 years old, I broke my leg playing football. Well, it wasn’t regulation football, but a game the neighborhood kids called “fumble-itis,” which I’ve come to learn is called “Kill the Man with the Ball” in other places. There were other little kids like me playing, but also big kids. Like, really big kids. I caught the ball (miraculous!) and was tackled by a 13-year-old girl and, SNAP, there went my right tibia. It wasn’t just a thin hairline crack either. The X-ray showed that it was a complete fracture with quite a bit of space between the two halves of the bone that broke. It didn’t break the skin, but I had a lump on my lower leg that was half of my bone pushing underneath the surface.

I vividly remember the emergency room doctor telling my mom to leave the room while a nurse stayed by my side. (Did she hold me down or hold my hand? I can’t remember.) Then the doctor said to me, “I want you to scream as loud as you can” and he gripped his hands around my shin and pushed the broken halves of my tibia back together so they would heal together straight. (This process is innocuously called “setting the bone,” and I think methods may have advanced since 1977. Or at least they use anesthesia or something nowadays.)

No matter how it was accomplished, there was no way my bone would have knit itself back together properly without first setting things in place to facilitate healing. And that hurt. A lot. It has to hurt if it’s to heal.

I’ve carried this lesson with me through trials and troubles in my life, and no single tragedy has affected me more profoundly than succumbing to the pressure to abort my first child at 9 ½ weeks when I was 17 years old. My subsequent suicide attempt failed and it has taken decades of psychotherapy, reconciliation with God, and a loyal support system to heal from this trauma. But as stormy weather can sometimes make my right leg ache below the knee, so can the world sometimes make my heart ache just below the surface of my scarred soul.

That old familiar pain paid me a visit when I watched the brilliant award-winning documentary Hush. Punam Kumar, a pro-choice filmmaker, diligently researched the deliberately hidden (and scientifically and statistically verifiable) links between abortion and breast cancer, preterm birth, and lasting negative psychological and emotional aftereffects. Her speaking style is professional yet conversational, and never condescending or judgmental. She even broaches the topic of gender-selection abortion and its devastating effects worldwide. We follow her path of discovery and she honestly confesses her own pro-choice bias but refuses to let this interfere with her objective view of the unquestionable data presented by pro-life researchers. She lets us share in her own ordeal of late-term pregnancy loss. Her multiple attempts to seek answers from the largest and most prestigious research institutes are rebuffed. She gives a platform to a group of women who unflinchingly share their sorrow, guilt, and regret after their abortions — yet this segment lends credence to the maxim that sharing the pain lessens it.

The sheer magnitude of the truths uncovered in this film affect millions of women. Many of whom have suffered greatly as a result of the political motivation to suppress full disclosure of the risks of induced abortion, and many more who will suffer in the future as this vital information continues to be avoided in discussions in abortion facilities. Kumar makes an undercover visit to an unnamed abortion center and records her conversation with the clinic director, who denies that any evidence exists to support the claim of increased risk of breast cancer following abortion. (Hushfilm.com, the website for the film, includes links to all of the studies referenced in the movie.)

As a woman who deeply regrets her abortion, this film was difficult to watch at times. Learning that my breast cancer risk may be 800 percent higher due to my abortion (which occurred when I was under 18 and further than nine weeks pregnant) has compelled me to finally call for that mammogram appointment I have been putting off for a few years.

As an ardent and public pro-life advocate, I disagree with Kumar’s personal conclusion that abortion needs to remain a legal option, but I wholeheartedly agree with her demand that the medical community eschew politics for the sake of women’s health and the health of future generations.

Knowledge is power. Don’t hide from it.