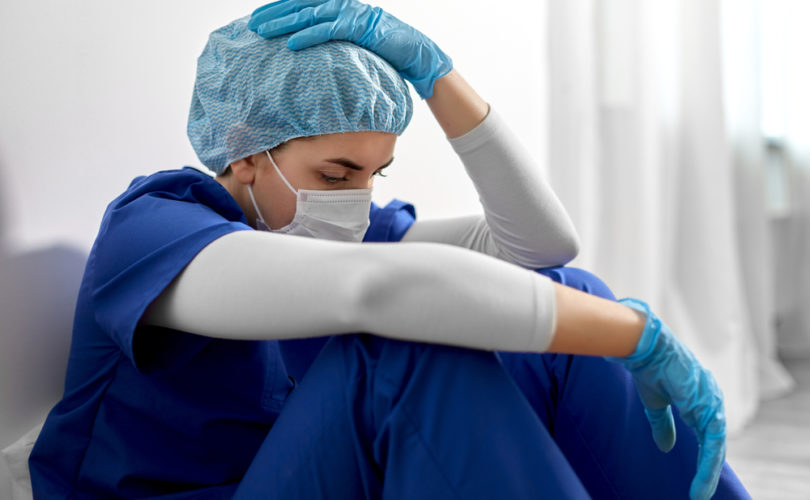 Anonymous
Anonymous
Comments
3
Editor’s note: The author of this piece is known to LifeSiteNews but wishes to remain anonymous.
(LifeSiteNews) — It has been almost a year since I was forced to resign from my job as a registered nurse in Australia’s state of Victoria because I would not take a COVID jab.

The Victorian government introduced coronavirus vaccine mandates for all healthcare workers in September 2021; they came into force by the end of October. Every person working in any healthcare setting had to have 2 doses of an approved vaccine (either Astra Zeneca or Pfizer) or lose his or her job. Most healthcare workers by that stage were already fully vaccinated as the jabs became available to us first in January 2021.

I had decided early on that I wouldn’t get vaccinated for COVID, and so I knew there might come a time when I would be forced to choose the authority of my conscience over my job. Although I had mentally prepared for this, the reality was much harder than I expected. I had worked for my employer for 6 years, beginning after first becoming a nurse, and had trained at that organization as a student. Since January 2020 I had been working across different departments in 3 of my employer’s hospitals including emergency, medical, and surgical wards and palliative care.

Fortunately I had a sympathetic manager at the time. This administrator was the only person I was honest with, as I didn’t feel I could trust my colleagues to understand or be sympathetic with my position. I emailed my resignation to my manager after my shift on a Friday afternoon and haven’t been back since. None of my colleagues knew that I was leaving. I later got in touch with one other nurse who had left just before me for the same reasons and who was braver than I in being honest with her colleagues. We have since become good friends.

After an initial period of rest and relief to be out of such a stressful environment, I was filled with doubt and fear. I had just been offered a position to train as a midwife, something I had wanted to do for so long and which I had to turn down due to the mandates. It was the most difficult decision I have ever made. I felt completely lost—a failure. Even now, the memory of that time brings me to tears. I decided that I would wait a year to see if the mandates were removed, and then assess my return to nursing.

During this time, I tried to leave Australia to visit my parents. They live overseas, and I hadn’t seen them in 2-and-a-half  years. Three times I applied for an exemption to leave and was rejected each time. I wasn’t allowed to leave my own country. I was told by a federal government spokesperson that the risk of bringing COVID back to Australia was too high to allow me to leave in the first place. It was ludicrous: by that time the infection numbers were the highest they had ever been in the pandemic thus far, and I would have had to quarantine on my return for 2 weeks regardless of my test result.

I started working as a personal carer for a few hours a week and spent some time visiting friends around the country as our final lockdown had just ended. I caught the dreaded virus itself this January. After a few days of being unwell, I recovered quickly with the right treatment and discovered that I was now eligible for a 6-month federal government issued exemption. I could return to work!

I had had no idea that this was an option for me, so I was overjoyed and contacted the nursing agency with whom I was still employed. They accepted the exemption, and I prepared to start working again in March. After 2 weeks back at work, my shifts were suddenly canceled by the hospital where I had been working. They wouldn’t accept an unvaccinated nurse, even with an exemption for natural immunity, and all the hospitals were following suit.

The nursing agency was sympathetic and tried to find me other contracts but with no success. Every employer they approached had the same rule even though there was an increasing healthcare staff shortage. Ambulance and emergency department wait times were causing serious and even fatal delays in patient treatment.

Apparently, vaccine “acquired” immunity was the only kind of immunity that counted. That was news to me. Around this time the claim that the unvaccinated were the ones responsible for spreading the virus was quickly being proved false, but it didn’t seem to make any difference.

By June I was so disheartened and fed up, I bought a plane ticket to visit my family overseas. In April, the unvaccinated were finally allowed to leave Australia, and I couldn’t wait to get out. I was feeling like a prisoner by that stage. It’s hard to describe the relief of being away from that toxic environment.

Many other countries seem to have gladly moved on from the COVID madness. However, Australia still seems obsessed with it. The vaccine mandates for healthcare workers are still in place almost a year since their introduction. The reason for this is inexplicable.

I am still unable to work as a nurse in my own country, and my options are limited. Do I change careers? Get vaccinated after all? I’m still not sure what to do, but in the meantime I am hoping and praying that our state governments remove their restrictions so that I and many others can return to the professions we love.

This experience has opened my eyes to the kind of society we have created for ourselves—and what I have seen is frightening. But it has also taught me what total abandonment to the will of God looks like. Whatever happens, I know that by trusting in His providence, I can move forward with confidence and joy.