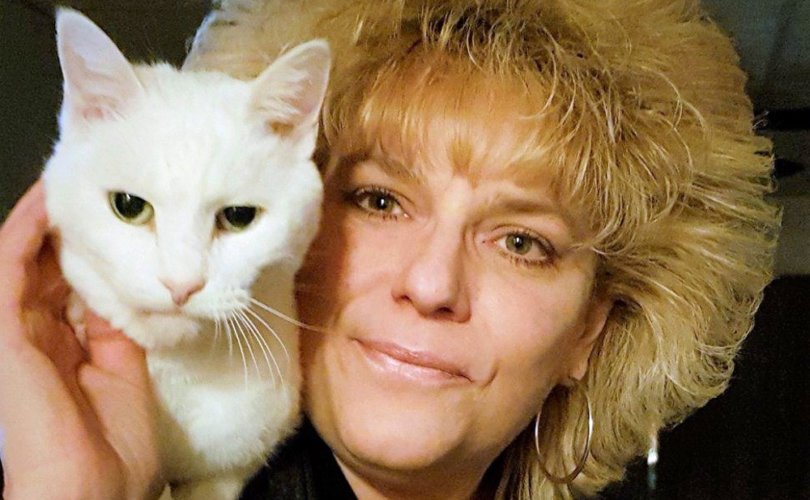 Luci Bast with her cat Andy.

November 23, 2018 (LifeSiteNews) – It happened on May 12, 1989.  Canada had just struck down the previous year the existing abortion law from 1969 that offered a few protections to preborn babies, although I didn’t know that at the time. As the “Morgentaler Decision” came into effect, I was in a rehab centre to overcome an addiction to prescription painkillers that developed years before as a result of a tumultuous home life and chronic pain from a serious childhood injury.  Rehab was difficult, having to come face to face with my inner demons, but thanks to a caring therapist who eventually broke down my walls, the treatment was successful.

Out of rehab and back in reality, I obtained employment in my career field and regularly attended meetings to maintain my sobriety.  Unfortunately, no one informed me about the vipers that lurk in the world of recovery – the infamous “13-Steppers”.  These people aren’t interested in recovery, but prey on the vulnerable for sex or money.  The advice given in rehab of not dating during the first year of recovery is a very valid one.  Your brain is still toxic, former coping mechanisms have not yet been replaced with healthy alternatives and this combination creates chaotic emotions until adaptation into your new life has been achieved.  Being in this state makes one an easy target for these 13-Steppers.

I was hurting, scared, and lonely and fell for his come-ons.  I just wanted to be wanted instead of feeling like a failure all the time.

The relationship was very brief, perhaps a week or two, as he had no intention of managing his addiction and I was committed to mine.  About a month after it ended, I started having strange symptoms – abdominal pain, ugly discharges and intense fatigue.  Not having a family doctor at the time, I went to the local clinic for an examination.  I worried that I caught an STD.

The doctor called me a couple of days later with the results of my examination and tests.  I had a virulent case of chlamydia, not received from the 13-Stepper, but by a cheating ex-boyfriend of six months previous.

The doctor also had other news for me – I was pregnant.

Stunned, I didn’t know what to say or do.  He recommended that I see a specialist immediately to decide on the best course of action to take since the situation was complicated.  If I took the intense round of medication necessary to treat the advanced STD, I was told it would kill the child.  Alternately, forgoing the treatment for the infection would very conceivably destroy any chances of having another child in the future and would probably kill my unborn baby eventually anyway.

It seemed impossible to make a choice.

I went to another, well-established doctor for advice.  She adamantly recommended an abortion and taking the round of medication to preserve my future fertility.  To get a clearer picture of what we were dealing with, she sent me for an emergency ultrasound as I was already six weeks along.

During the ultrasound, the technician and I got into an argument regarding the gestation period.  Since I only had sex twice within a two-day span during the last six months, I was confident that I was six weeks pregnant.  The technician insisted I was only three or four weeks along.  I told her I could tell her exact dates and it was six weeks ago.  After I explained about the STD, she conceded that there may be something wrong since the fetus development was not consistent with my date of conception.

After all the test results came in, my new doctor sat me down and asked me to choose – my fertility or my unborn child.  Given that I was convinced the baby was deformed due to the results of the ultrasound, I chose my fertility which meant taking the medication and having the abortion.

I felt numb and just wanted it over with.

The doctor coached me on what to say when dealing with the gynecologist she was sending me to – be firm in what I wanted and don’t back down.  Even though abortion was now legal, most doctors were still hesitant and only performed the ones deemed “medically necessary” for the health of the mother.

She stated firmly, “I’ll get you this abortion if I have to drive you to Winnipeg to see Morgentaler”.  I was assured by her adamance that this was the right thing for me to do.  Probably because it was what I wanted to hear at the time.

The appointment with the gynecologist went smoothly, but he did grill me closely about my feelings on the matter.  I didn’t waver in what I wanted so he was eventually convinced.  He said my situation met the criteria of being a medical necessity, instructed me to take the medication and scheduled the abortion in ten days.

I was terribly sick the last three weeks of my pregnancy, being constantly nauseated and unable to eat much.  I lied to everyone about my condition, except for one sister who would be escorting me to and from the hospital.  The day of the abortion fell on her birthday and I woke up that morning feeling better than I had in weeks.  The nausea had abated and I had more energy.  I’m still not sure if it was the result of the infection finally healing or if the medication had killed my child.  At the time, I didn’t care which, being so grateful to feel half-way normal again physically.

After the abortion, I woke up feeling sick again and in pain.  I refused any painkillers since I was in recovery and I was discharged later that day.  I could barely walk from the pain and weakness, I hung onto my sister when we stopped for my prescription on the way home.  On the way out of the pharmacy, I almost passed out, I felt worse than I did during the pregnancy.  However, it didn’t last long and I was feeling better the next day.  The physical recovery didn’t take long, but the emotional healing continues to this day.

My initial relief of feeling better and not having to deal with a pregnancy was soon replaced by guilt and regret.  Christmas that year was difficult as that was roughly the time I would have given birth to my child.

The nightmares started then, hearing a lone baby crying persistently for the mother who never came.  I just knew that it was my child, looking for the mother who abandoned him so callously.  Having the date of the abortion usually corresponding with Mother’s Day only amplified my guilt. For years, I struggled to remember my sister’s birthday – I simply wanted to block out that day and pretend it never happened.  Regardless, the nightmares continued, and I was not allowed to forget.  I was overwhelmed by grief every May and December, regretting what I had done but trying to justify it as being medically necessary.

I stayed celibate for over three years and then met another man who I was with for twelve years.  During those years, I had two miscarriages – I could not hold a pregnancy.  After the last one, I went to another gynecologist to request having my tubes tied.  I couldn’t go through losing any more children since it triggered the guilt and pain of the abortion.  I decided since I was almost 40 years old at the time, that my childbearing years were over anyway.

A couple of years after the sterilization, I had to have a hysterectomy due to intense bleeding and pain.  The surgeon told me after examination of my uterus that I couldn’t have carried a child after all as the uterine tissue was receding into the abdominal wall and was getting worse.  That explained why I would miscarry early in the pregnancy: there simply wasn’t enough nutrients or tissue to sustain a growing baby.  She said this condition was unusual for a woman who never had a baby, but I knew the reason.  The long-ago chlamydia that led to my abortion was probably the culprit.  That made my decision back then, in retrospect, to be even worse in my mind.

My choice turned out to be wrong.  I didn’t save my fertility after all and chose to kill my child in vain.

After the hysterectomy and realization of the ramification of my past choices, I was emotionally numb.  My life started to fall apart around me with everyday tasks being difficult.  I struggled with even more guilt and regret.  I wished I would have let the pregnancy run its course and if the baby miscarried on its own, that was God’s will.  I wished I would have made my ex-boyfriend use protection so I wouldn’t have caught an STD.  I wished I would have made the 13-Stepper use contraception so I wouldn’t have gotten pregnant.  I had so many regrets, beat myself up emotionally and blamed myself and them for everything.  It seemed that this would haunt me for the rest of my life.

Only when I returned to my Catholic faith a year ago was I able to purge myself of the unrelenting guilt by eliminating the main justification I used to comfort myself over the years – the abortion was medically necessary.  As I prayed for absolution, it became very clear to me and I had no choice but to admit my sins fully to God.  I wanted the abortion even before I knew it was deemed necessary for my health.  That was the true guilt I had been running from for almost thirty years.  I was raised Catholic and knew better.  I knew it was wrong, but I did it anyway.  It just became convenient for me that I was told that the abortion was medically necessary.

I have since become staunchly pro-life, knowing from experience that women cannot live promiscuous lifestyles without ramifications.  Abortion is not an easy out for indulging in the deadly sin of lust. Promiscuous women cannot blame others for their actions.

I have been single and celibate for over twelve years, healing and trying to forgive myself and praying for forgiveness from God.  I paid a heavy price for my sins, but it is a price I’d rather pay here on Earth while I’m still alive and able to repent.

Every choice we make in life comes with consequences. Killing your child to try and shirk your responsibilities is just plain selfish and wrong.  I know, because I did it, and it ended up costing me dearly.  Don’t make the same mistake I did and spend your life in agony and regret.  Choose the life of your child.  I wish I had.