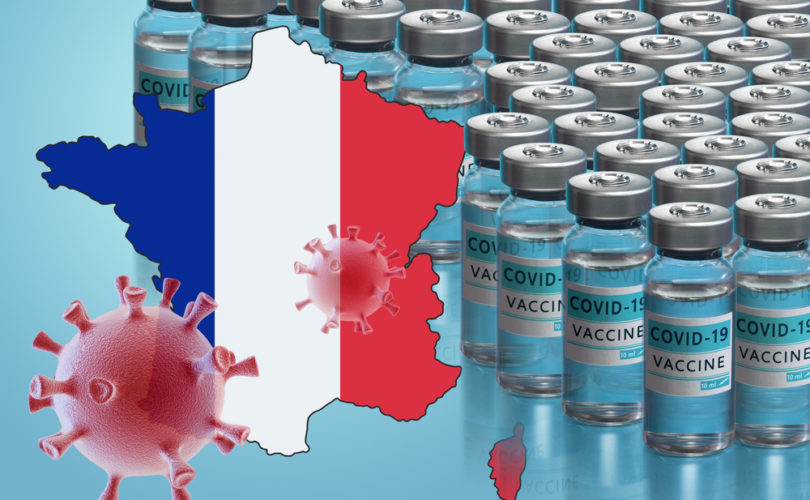 I joined the march in Avignon, in the south of France, where thousands of people of all ages and political horizons walked for more than two hours through the ancient streets of the city where nine popes had their residence in the 14th century. The weather forecast that had promised showers and thunderstorms during the afternoon did not deter a peaceful but determined crowd whose numbers – as in 180 other cities in France, not counting spontaneous gatherings in many small towns across the country – had grown once again compared with previous weeks.

The mainstream regional left-wing daily Le Provençal counted some 4,500 protesters in Avignon; the true number is probably higher than that, especially since some left the march early because of the pouring rain that set in one hour after its start. It was a drenched mass that reached the esplanade in front of the medieval palace of the popes, their home-made cardboard placards folding under the weight of the water. As on previous weekends, the organization was far from centralized, all comers were welcome, and trade union banners adjoined many French flags.

“Liberté, liberté!” shouted the multitude with conviction. But never was the cry so loud, so unanimous as when it opposed the vaccination of children: “Don’t touch our kids!”

While the mainstream press paid little attention to the demonstrations, they did notice that the diversity of the protesters is unprecedented, and it is probably this aspect of the situation that is most worrisome for the authorities. When peaceable seventyish ladies with permed hair share slogans with long-haired environmentalists, when the young and the old, local working-class people and chic holiday-makers rub shoulders and laugh at the rain while calling  “Macron, demission” (“Macron, step down”), it means that something so deep has been touched that all are prepared to set aside their differences to make their determination clear.

— Article continues below Petition —
PETITION: No to mandatory vaccination for the coronavirus
Show Petition Text
1082049 have signed the petition.
Let's get to 1100000!
Thank you for signing this petition!
Add your signature:
Show Petition Text

Together with friends from the “Centre Charlier” summer university (it was at such a university, nearly forty years ago, that the Paris-Chartres Pentecost pilgrimage was launched), we marched through the streets of Avignon with the flags of an antifa group in front of us. To be sure, the antifa activists soon disappeared when the rain started… By then we had been joined by a local parish priest who told us he had participated in the demonstrations since the first edition on July 17. Buses blocked by the crowds honked their horns, following the rhythm of our cries for freedom. There were practically no policemen in sight.

Similar scenes took place in each and every large and medium-sized town in France while in Paris no fewer than four large gatherings took place, including one which attracted over 100,000 people. For Paris, this is truly astounding. Here mobile police forces marched threateningly alongside the procession, left and right, wearing riot-gear. But there are only so many law enforcement officers in France. It was only in the largest towns such as Paris and Lyon that they were out in full force.

The first week of August is the time when the largest proportion of inhabitants is away for the summer vacation at the seaside, in the mountains, or in the country. Usually, France’s capital looks like a sleepy, empty provincial town at that time of year, and organizing any kind of political protest is deemed next to impossible. The incredible success of the four marches in Paris gave the lie to such pessimism. Not only were many locals present, but they were frequently joined by European tourists who happened to be visiting the “City of Lights.”

For it is a question of fighting the vaccine mandate and the sanitary pass rules – all the more so now that, according to the mainstream press, the government is seriously considering the extension of the vaccine mandate to all, including children and pregnant women, some of whom are already being jabbed as members of medical professions.

In the village of Nyons, in Provence, one of the many tiny demonstrations that dotted France without being listed in the informal catalogue of the Saturday afternoon meetings attracted almost one hundred locals. Last week in Nyons, a doctor was present: he was called upon to speak when a car with loudspeakers announcing a passing-by circus spontaneously joined the event and brandished a microphone, offering to let the meeting’s organizers address the crowd. No-one really knew who was organizing what, and it was the doctor who, quite naturally, ended up amplifying his misgivings about the experimental jab for a quarter of an hour.

A selection of videos of marches all over France can be seen here.

It is this spontaneous character of the public protests that is turning into a nightmare for the French authorities, whose language on the mainstream media is becoming more and more violent and disconnected.

They are talking about the millions whom they say have received the shot, playing down the concerns of the very large number of health workers who are prepared to resign rather than to become “guinea-pigs” for the experimental Spike Protein injection. They don’t admit that, at present, most people who are accepting the injection are doing so because they want or need to travel on long-distance public transport, or because they are terrified of losing their jobs and homes, or simply because they are not prepared to give up travel, restaurants, cinemas, or sports.

Nor are the health authorities responding to challenges from various doctors or pharmaceutical experts to talk about the safety of the “vaccines,” or the feeble death count of the Delta variant, or the increasingly well-established inefficiency of the “vaccine” regarding this Delta variant that at present accounts for almost all positives in France.

Instead, health minister Olivier Véran daily announces the probable resurgence of COVID in a “deadly fourth wave.” Of course, prophylactics or treatments such as vitamin D, Ivermectin, hydroxychloroquine, and others are still being systematically denounced while the doctors who prescribe them risk problems with their professional associations.

To date, the demonstrations have had one marginal effect. Over the weekend, Véran announced that, finally, COVID negativity tests will be valid for 72 hours instead of 48, and self-administered tests will be sufficient to obtain a sanitary pass as long as they are validated by a health professional.

The French opponents of the sanitary pass (or “nazitary pass,” as many call it) were not impressed. Next Saturday will see a new round of demonstrations, and they will likely be even more massive, far beyond the “237,000” protestors counted by the French Interior ministry in 180 towns while local counts were in thousands, tens of thousands, and even more in Paris.

Olivier Véran’s August 7 response to health-workers’ announcements that they would go on strike was to say that they would, at one point,  no longer have the leisure of doing so “because, by definition, this vaccine mandate will apply.”

Strikes began on August 9, mainly in the south, the day segregation according to sanitary status came into effect in France

French Catholic journalist Yves Daoudal commented on the new era that has opened in France with these words:

Today is the beginning of a form of discrimination that has never been witnessed in history, and this in ‘the land of liberty and human rights.’

I have not been able to enter a store for a long time now because it is out of the question that I put a sanitary napkin on my face.

Since July 21st I have not been allowed to go to the cinema, to the theater, to a concert.

And from this day on, I am not allowed to go to a bar or a restaurant, nor to take a train or a plane.

Some people have mentioned the yellow star, but the comparison is irrelevant: the yellow star did not prevent you from going to the restaurant or taking the train.

Some have evoked apartheid, but the comparison is irrelevant: apartheid did not prevent blacks from having their own restaurants or from traveling.