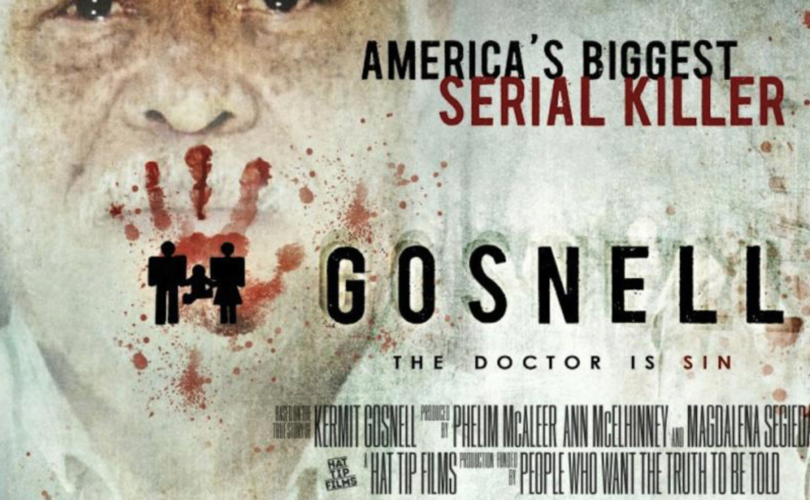 October 29, 2018 (Operation Rescue) – The long-anticipated movie about the 2013 Kermit Gosnell abortion/murder trial is finally out and showing in theaters around the country. I covered that case from its inception, personally attended and reported on the trial in Philadelphia, and even wrote a book about it. Because the story about Gosnell and his squalid abortion business is very personal for me, I have avoided seeing the movie – until now.

The events depicted in the movie were very different from the actual events I participated in and witnessed – but not in a bad way. Going in, I knew that artistic liberties had to be taken with the storyline to compress the events into a movie format, so I tried to prepare myself for that. In truth, the actual trial experience was much worse and, in many ways, more dramatic than what was depicted in the film. I understand that many of the more horrific details were omitted from the movie in order to maintain a PG-13 rating.

Ironically, at the Warren East Theater in Wichita, Kansas, where I viewed the movie, it was available only in the luxury part of the theater reserved for those 21 or older.

In all, the movie was well made and well acted. It gives a good summary of events and helps drive home how such horrendous crimes were allowed to happen.

The depiction of the health department official who was so uncooperative was particularly good. Her insistence that she was just following orders not to inspect abortion facilities showed the regulatory failure of the politicized system to protect women and innocent babies from harm. By turning a blind eye under the cover of “reproductive rights,” they were culpable in allowing abortion businesses like Gosnell's to deteriorate and endanger lives.

As well made as the movie was, it was sometimes difficult for me to process it, having lived the experience. Adding to that difficulty was the fact that all the names of the parties involved in the trial were changed, except for Gosnell and Detective Woods, who played a more expanded role in the movie than in real life. This made it confusing for me at times when I tried to match up a character with his real-life counterpart.

While the movie made it seem as if Gosnell was an aberration, that is certainly not the case. I have researched and investigated abortion abuses for over three decades and can attest that various aspects found in Gosnell's abortion clinic can be found at abortion facilities around the country.

I was a bit disappointed in the portrayal of closing arguments, which, in my opinion, were the dramatic apex of the case. I was sorry that Assistant District Attorney Ed Cameron was essentially written out of the story. During his impassioned closing arguments, he delivered a case for the humanity of Gosnell's tiny victims in such an emotional way that it left lead prosecutor Joanne Pescatore sobbing at the prosecution table.

I was also sorry that the movie left out Cameron's most dramatic moment. While countering the defense's argument that Gosnell was the victim of a racist prosecution and that the babies Gosnell murdered were not fully human, Cameron turned to Gosnell and thundered, “Are you human?” then turned to the jury while pointing to Gosnell and said, “He's the one in this case that doesn't deserve to be called human.”

It was a shocking moment that produced absolute clarity about who the true victims really were and was perhaps the most sensational of the entire trial. Ed Cameron was the real hero of this story, who ensured justice for those babies, and for Karnamaya Mongar, who died from a drug overdose at Gosnell's abortion mill during one of his shoddy late-term abortions.

I have been asked many times about the character of the tattooed blogger in the movie that conducted her own investigations and tipped off law enforcement to important information.

While no real person exactly like that existed, I am told that was a composite character based partially on me; local columnist J.D. Mullane, who took the photo of the empty media seats that went viral on Twitter; and others. I actually saw evidence of myself in that character (minus the tattoos and perhaps the attitude).

In the year between the raid on the clinic and Gosnell's actual arrest, I wrote about Gosnell's troubling history as an illegal abortionist prior to Roe v. Wade and launched campaigns to encourage our supporters to contact the district attorney and demand Gosnell's arrest and prosecution.

After seeing the movie, I now believe those campaigns to demand Gosnell's prosecution are why court officials expected a huge national interest in the trial and moved it to a larger courtroom. When I first got to court, I found out from one of the officers who testified that they had actually been expecting me.

Perhaps I'm not the best person to dispassionately evaluate the movie because I was so close to the actual events. However, I am very glad the movie was made and highly recommend everyone seeing it. I know this movie will reach people from all walks of life and help them to better understand the significance of the Gosnell case. I hope it will cause viewers to re-evaluate the inhumanity of abortion and be inspired to work to bring it to an end.