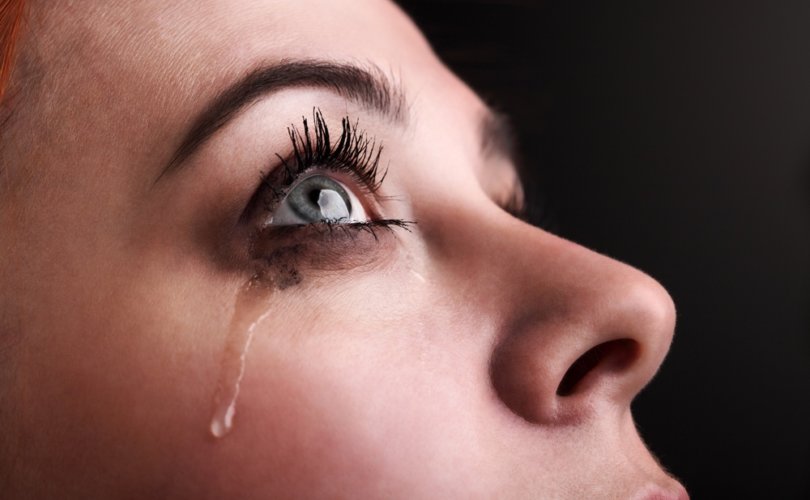 December 14, 2017 (LifeSiteNews) – I was sitting on the floor of my bedroom with friends playing Monopoly when I felt it. Something wasn't right. Afraid, but wanting to appear like everything was normal, I maintained my composure. I would wear my best poker face, even if I was only playing a board game.

Politely, I excused myself from the top hat and thimble game pieces and crossed the short distance from my floor to the bathroom across the hall. It was behind the privacy of the closed door that I was first able to confirm what I had already feared — at 17-years-old and six weeks pregnant, I was suffering a miscarriage.

And that’s the first memory that came rushing back to me last week when I read a pro-abortion activist’s opinion piece equating miscarriage with abortion. In the article, she describes her personal experiences with both miscarriage and abortion – calling them “sisters” – asserting that there is no difference between a woman who miscarries and one who deliberately terminates a pregnancy.

As a woman who has endured the heartbreak of a miscarriage, I can’t express how shocked and insulted I was by the absurdity of the comparison. How dare she imply that the loss of a child through an act of nature is similar to a mindful choice to kill a baby in the womb? Most women who have miscarried loved their babies and were prepared to make sacrifices for them. Whether they were planning to raise the child themselves or to utilize adoptive services, both choices would have been an act of selfless love – something an abortion can never be.

I will never forget lying on that table in the dimly lit ultrasound room, a scared 17-year-old girl trying to figure out what was happening inside of her and why. With the glow from the ultrasound monitor illuminating the expression of sorrow on the nurse’s face, she assured me she was looking for my baby. The room was heavy with silence as she searched. I wasn’t sure what I was supposed to be seeing on the screen but everything I needed to know I understood through the avoidance of eye contact, which told me it was over before I'd even heard the sympathetic tones respond that, no, there wasn't a heartbeat, and sorry, the baby is gone.

Where was my choice?

Women who suffer a miscarriage are without choice, while women who have an abortion have intentionally chosen to end the life of their child.

Intent is everything. When a man dies from a heart attack we treat the situation differently than when a man dies from being stabbed in the heart. And we should treat them differently: one is a natural death, the other a murder. Similarly, a miscarriage is a result of natural causes, beyond the choice or control of the mother, whereas abortion is an act of violence against an innocent human being, resulting in that baby's death, with the mother’s consent.

I grieved the loss of my child for days, weeks, months – the kind of grief that leaves one bedridden, unshowered, and emotionally shattered. It felt as if all the light in my world had been sucked out. I mourned the loss of a future with my child – a future I would never have surrendered to abortion, but had taken from me by miscarriage.

I had already imagined what he or she would look like, their newborn smell, the baby giggles, first steps and bicycle rides, working on homework together. I wondered whether they would love pineapple on pizza, or think it was yucky.

In my mind, I had already lived a life with this child.

While the future I envisioned may have been mere potential, the child in my womb was not. He or she was real, alive, and already developing all the necessary organs and special little traits that would make that future possible.

My baby’s death was a kind of death for me as well. The anticipation of butterfly kisses and bruised knees was gone, replaced by a gnawing pain and a lingering fear that continued to haunt me in later pregnancies. At each prenatal ultrasound appointment I would always subconsciously hold my breath and brace myself for what the screen might – or might not –  display, before the ultrasound wand was even placed upon my swollen belly.

Abortion propaganda would tell me that I was fortunate to have a miscarriage. A 17-year-old girl has no business becoming a mother, right? She has her whole life ahead of her, college and a career — and let’s not even get into her unhealthy relationship with the child’s father and the financial instability that comes along with working part-time, waiting tables.

Thankfully, I never bought into the disempowering fearmongering found in a Planned Parenthood brochure.

I knew the road to motherhood would not be easy, and I was afraid of becoming a teenage mother. But I also knew that women are strong and resilient, and that women throughout all of history had become mothers in far more dire circumstances than I faced.

I faced a lot of scary unknowns, but the things I did know, I knew with utter certainty: I knew I could find a way to do it, I knew that I loved my baby, and I knew that there was nothing I wouldn’t sacrifice to spare the life of another human being, especially when that human being was my own child. I was prepared to lay down everything in an act of selfless love that encompasses the beauty and gift of motherhood.

If I'm honest, the pain of losing a child is the lingering kind. I don't know that it ever fully goes away.

But I don't think that it's supposed to.

The loss of human life is tragic, regardless of the surrounding circumstances. This is something we just innately know. We feel it. There’s something ugly, tragic, and wrong about death, and nobody needs that wrongness explained.

Yet abortion advocates like to pretend that the death of an aborted child is a different kind of death. A less important death. Not because the aborted baby is somehow less human than his or her miscarried counterpart, but simply because the mother chose for her child to die.

If nothing else, I am glad to see an abortion advocate admit that, in both cases of miscarriage and abortion, the life of a human being is lost, and the future they might have lived is gone right along with them.

An abortion is a choice, as any pro-abortion advocate will tell you. To choose to have an abortion is to consciously consent to an act of violence against the child in the womb, resulting in that child’s murder. There is no escaping this reality by pretending that it is the same as an accidental death. Just as one who’s been stabbed to death can never truthfully be labeled a heart attack victim, an aborted baby can never be classified as dead by natural causes.

Miscarriage and abortion are not sisters, they are not even in the same family.