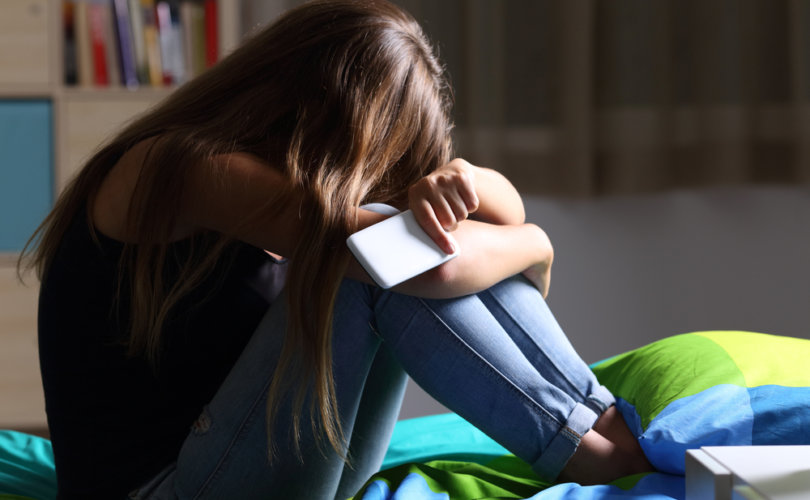 (The Daily Signal) – My daughter’s story is no longer novel. Stories like it are occurring in your state, your town, and perhaps even on your street. Gender dysphoria — the incongruence between the mind and the body — moves stealthily and quickly to invade girls and boys alike.
But this isn’t a cautionary tale. It’s a warning.

My daughter was an ultrafeminine girl since birth. She insisted that her room be painted pink, and she refused to wear anything but dresses until third grade. She avoided her older brother’s toys and sports, choosing tea sets and Shopkins, a series of tiny, collectible toys.

Her favorite activity was to slip into my closet and don my few sparkly clothes and shiniest of heels. She rejected sports in favor of art and sewing.

That all abruptly changed when she turned 12. As her body matured into young womanhood, she stopped begging for a bikini and avoided any clothing that accentuated her figure. She hid her breasts under men’s extra-large sweatshirts.

I remembered doing similar things as my body changed, so I didn’t worry at first.

Then, my daughter immersed herself into anime art and cosplaying, the hobby of dressing like fantastical characters. I supported her creative side.

I also didn’t know that the older cosplay community groomed the younger cohorts.

During that same time period, my daughter went through Teen Talk — a Manitoba, Canada-based program that says it provides “youth with accurate, [nonjudgmental] information” on “sexuality, reproductive health, body image, substance use awareness, mental health, issues of diversity, and anti-violence issues” — at her public school.

She came home with a whole new language. She and all her girlfriends discussed their labels — polyamorous, lesbian, pansexual. None of the five girls chose “basic,” their term for a straight girl.

Now, I was worried.

She distanced herself from her old friends and spent more time online. I checked her phone, but I was not astute enough to know that she had set up “appropriate” fake social media accounts for my viewing.

An older girl showed romantic interest in her. I barred that girl from our home.  I learned later that she had molested my daughter.

When my daughter was in the eighth grade, as a Christmas gift, I took her to SacAnime, an anime convention in Sacramento, California. There, she met a girl three years her senior, but light years more mature. That girl mesmerized my daughter with her edginess or magnanimous personality.

The older girl went by “they.” After their meeting, my daughter got a boy’s haircut, stopped shaving, and asked for boys’ underwear. My daughter parroted everything about the older teen.

She started making gross TikTok videos, her language became vulgar, and she redecorated her room to look like a cave. She self-pierced her nose with one of those bull rings. She broke every family rule. She was morphing into an emo-Goth-vampirelike creature. She was unrecognizable. Her personality descended into anger and rudeness.

The summer before ninth grade, she announced that she was transgender. Post-announcement, she began to threaten suicide. She sunk into deep depression.

I managed to get all of her passwords to all of her social media accounts. What I saw was jaw-dropping.

Older girls were instructing younger girls how to sell nude photos of themselves to men for money.

Girls bragged about their different mental illnesses. They talked about which drugs do what. They talked about how they are really boys, not girls. They discussed “top surgery” (that is, having their breasts removed) and “packers” that create a bulge in one’s pants to imply the presence of a penis.

My daughter’s electronic devices were filled with TikTok videos and YouTubers talking about how great they feel now that they had “transitioned.”

There were messages in which strangers told her to kick my head in because I was a “transphobe” for refusing to call her a male name.

I sat next to her while she “attended” school online via Zoom. I deleted YouTube from the smart TV’s and locked up the remotes. I took every anime book from her room. I threw away all of her costumes. I banned any friend who was even the slightest bit unsavory.

She hated me like an addict hates the person preventing her drug fix. I held my ground, despite the constant verbal abuse.

After going through seven mental health professionals, I found an out-of-state psychiatrist who was willing to examine the causality for my daughter’s sudden trans identity.

I immersed myself in reading everything on the issue, talking to other parents and other professionals. I worked unceasingly to re-create the bond she and I used to share.

After a year and half of utter hell, my daughter is finally returning to her authentic self — a beautiful, artsy, kind and loving daughter.

I am not sure what the actual ingredients for the magic potion were for alleviating gender dysphoria in my daughter. The formula will vary, but what I did was, after a very brief misstep of using a male name, our family and all of the adults in my child’s life only used her birth name and corresponding pronouns.

We did not permit social transition, although we could not control the school setting. Unbelievably, our local Catholic high school refused to follow our edict.

As I mentioned previously, we pulled the plug on all social media and her access to anyone other than those persons we vetted. I forced my daughter to listen to specific podcasts on the subject while driving her to school. I printed out stories about female detransitioners (women who had medicalized, but then regretted their actions and returned to living as a woman) and left them throughout the house.

I left all of my research out in plain view, including “Irreversible Damage: The Transgender Craze Seducing Our Daughters” by Abigail Shrier, “Gender Dysphoria: A Therapeutic Model for Working With Children, Adolescents, and Young Adults” by Susan Evans, and other books.

I followed the advice of Parents for Ethical Care’s podcasts and the book “Desist, Detrans & Detox: Getting Your Child Out of the Gender Cult” by Maria Keffler.

I worked hard to take back the close relationship my daughter and I had once had. I bit my tongue until it bled. I took her anger and only responded with love or walked away when I knew I would respond poorly.

I caught her in vulnerable moments and hugged her or climbed into her bed. I stopped looking at her as though she were the victim of a scheme or a monster.

I let her know that I would never stop fighting for her. I let her see my posters from the protests I attended. I peppered her with questions that demonstrated the illogic of the gender ideology. I happened to have funny gender-critical memes on my computer when she walked into my office. Most importantly, I held my ground. I refused to accept her delusion with compassion.

I know that I have to continue to be tenacious as the gender ideology has crept into every facet of life. But for now, I can breathe a sigh of relief.