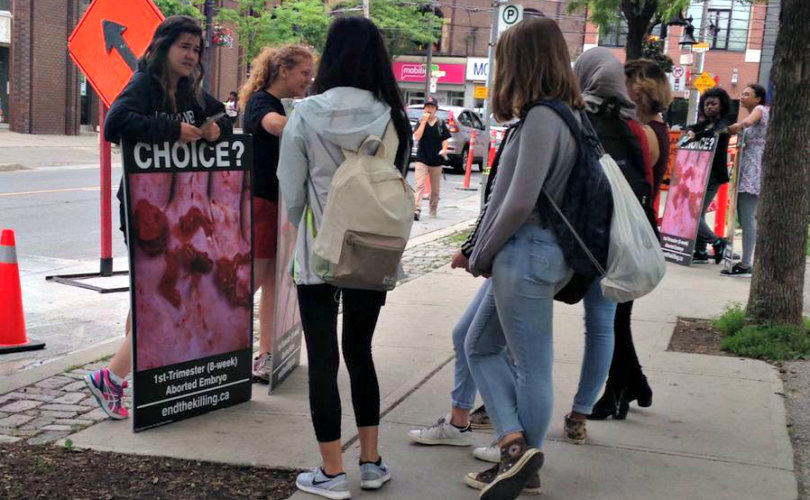 June 16, 2016 (LifeSiteNews) – I’m not a talkative person. I’m usually perfectly happy to mind my own business and allow you to mind yours if we happen to bump into each other on our way to work in the morning, or in line at Wal-Mart.

However, by the time you finish reading this article, an abortion will take place. A child who is too young to even realize what's happening will be torn piece by piece out of his mother’s body.

This is something that most people don’t realize, and I didn’t realize until I decided – almost on a whim – to do pro-life activism this summer. When I sent in my application to the Canadian Centre for Bio-Ethical Reform, I had no idea what I was signing up for. I thought that since I’ve always been pro-life (I come from a homeschooled Catholic family), it really couldn’t be that difficult to defend little babies from those evil abortionists. Right?

My very first protest was in front of a public high school, and, on top of that, right in front of the ‘smoker’s bench’ where all the “cool” high school kids hang out during their lunch break.

“How dare you tell me what to do with my body!” is the first thing I heard after I dutifully pulled out my sign with abortion victim photography and stood there like a good little pro-lifer. I was shocked. How could they not see that this picture portrays a child? A child whose life was brutally ended by whatever sharp tools needed to scrape out a living being from the place he should call home for the next nine months.

This child will never grow up to ride his bike for the first time, or try out for his school play. Of course I couldn’t tell that to a bunch of screaming kids.

So I stood there with my one week of pro-life apologetics training and just grinned through the insults. I actually remember my mind going completely blank – the entirety of my training disappearing into the dark recesses of my mind. I literally had no idea what to say. I think I even momentarily forgot why I was pro-life in the first place.

So there I was, someone who doesn’t usually talk to people I don’t know, much less talk to people who really didn’t seem to like me AT ALL. And I was getting yelled at. I honestly don’t think I’ve ever felt that uncomfortable before in my life. I still cringe when I think about it.

Those first few weeks were absolutely terrifying, and I was so tempted to pack up and go back home to North Carolina. But every time I thought of leaving, I remembered the pictures of those abortion victims. Most people don’t know what they are, or what they represent. But I do. And because I know what they represent, I feel like a have a responsibility to show them to as many people as possible.

So I stayed. I stayed for the people affected by abortion. Every day I drag myself out of bed at 6AM and go drop postcards in mailboxes. Every day I go do a choice chain on street corners and roadsides. Sometimes we even hang a huge banner over a highway overpass. I have no idea how many people’s minds will be changed by what they see on our signs, but I know that if I can save even one life, it will all be worth it.

That one life is worth the awkward encounters, glares, the lectures, the sweaty post-carding shifts, and the long days. I still don’t particularly enjoy being called a stupid girl who has no right to impose her beliefs on other people. I don’t like being given the finger, or being told to F off. But it happens. A lot. Most of the time people ignore me, or they tell me to leave them alone – in more colorful words of course. Because they are pro-choice, and nothing will change their minds, especially a girl who looks like she’s fifteen and has probably never been in a tough situation in her life.

But sometimes they stop and look. And perhaps that gross picture will stick in their minds and they will tell their brother, or their friend, or their teacher what they just saw. And perhaps their brother or friend or teacher will tell someone they know who is thinking about having an abortion. And maybe, just maybe, that mother will not give in to decide to keep her child.

This is what I think of whenever I stand outside with my abortion victim pictures. I remember all the thousands of nameless children who are unwanted, dehumanized, and torn to shreds. This is why I do what I do every day of the summer. I’ll never know how much of a difference I’ll make, but I know that I can try.

And I invite you to try as well. Do your research and know exactly why you believe what you believe, and know what you’re up against. I was talking to a man the other day that didn’t think we could make a difference. He told me that the world is slowly getting worse, and no matter what we do (he was pro-life), we could not change the world. I want to prove him wrong, and I invite you to do the same.