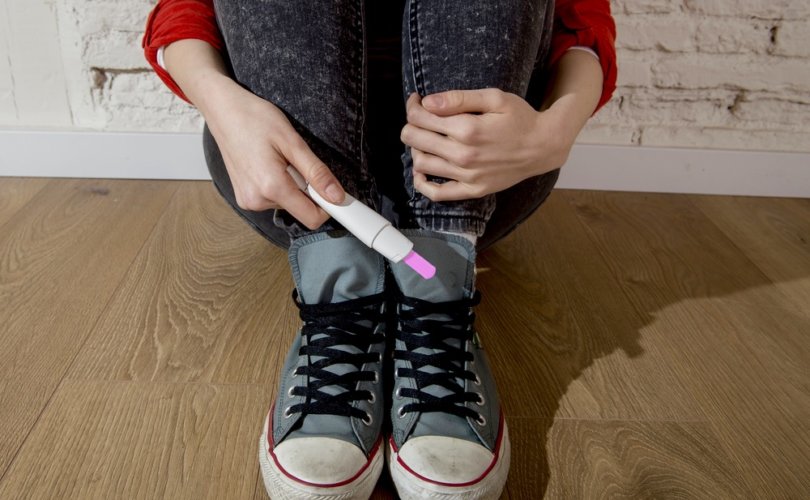 Christina felt overwhelmed by the gravity of the situation.Shutterstock.com

May 30, 2019 (LifeSiteNews) — This is a VERY long, deeply personal overview of my opinion and experiences with abortion. I expect few people to read it all, or even a small portion, for that matter, but for those who do, I am deeply grateful.

With abortion in the news of late in light of recent attempts to tighten laws in the U.S., I feel the need to share my personal perspective and correct some misconceptions. This isn't easy for me, because I know I'll probably lose friends and anger people I care about. Please know that if you are my friend but you disagree with me entirely, I will still love you. I've read so much misinformation and deceitful propaganda recently stemming from the abortion-rights lobby that I'm obliged to speak out now before I pull out my hair or start banging my head against the wall.

Many of you may already know that I'm unabashedly and unreservedly opposed to abortion. I'll never apologize for this. I believe the living being in the womb is a valuable person from the beginning of his or her life (conception) and deserves the same legal protection afforded to those living outside the womb.

I have many pro-choice friends whom I know to be good, compassionate individuals. I respect those who seek truth and knowledge and who care about events that shape our world. I can respect others who disagree with me, but I'd be lying if I claimed to respect someone's opinion that abortion is acceptable. Remember, I see the unborn child as a human being (a scientific fact), deserving the same right to life as every other human (a philosophical, or moral position), so with this in mind it would be irrational for me to approve of the direct killing of an unborn child for any reason.

Science teaches us that a new human life with entirely unique DNA comes into existence at conception when the sperm penetrates the egg, forming a new organism with cells that begin to multiply. The new zygote organically develops into an embryo, then a fetus, then an infant, a toddler, a teenager, and so on. It's the same person from day one, whether in or outside the womb. My 16-year-old son Justin was my child from the moment his life began at conception; he didn't magically become Justin at 12 weeks gestation, birth, or some other random moment designated by an arbitrary definition of personhood.

My recognition of the scientific facts about life in the womb, and my growing cognizance of the strategy by pro-choice activists to dehumanize the unborn through lies and euphemisms — a necessity to justify their commitment to unfettered abortion rights — prompted my decision to work as an activist, organizer, and media spokesperson in the pro-life movement for over ten years back in the '80s and '90s.

During this time I came to know a great many generous, compassionate, self-sacrificing, and highly intelligent people, who like me wanted to curb the violent demise of innocent unborn children, and assist women facing unplanned pregnancies, knowing many of them were unable to cope with the intense pressure placed on them by boyfriends and/or family members to abort against their will. Our goal was not to control women's bodies or to advance some sort of ancient patriarchal civilization; it was simply to help form a less violent, more loving society by protecting the lives of the smallest, most innocent and vulnerable among us, and to preserve the dignity of pregnant women who deserve options respecting their unique power to grow and nurture new life. Many of my pro-life associates (as pro-lifers do today) adopted unwanted and handicapped babies, fostered countless children, took single pregnant women into their homes, embraced grieving women who regretted their abortions, and were also involved in a host of other charitable activities.

As I grew more involved with the pro-life cause, my mother revealed something shocking to me: that she and my dad had planned to abort me, having been very poor at the time and already parenting six other children. How strange it was to learn that my life's work at that time was dedicated to preventing a procedure that nearly ended my own life. I'm uncertain why they never went through with it — abortion wasn't legal at the time, but there were still doctors who would do them. I presume my mother's faith proved stronger than the desire to be rid of me. Tragically, my two-year old sister was hit by a car and died six weeks before I was born. Imagine the expansive guilt and sorrow my parents would have had to live with if they had followed through on aborting me. My parents named me Annette after my sister who died.

As those gifted by the Creator with the powerful ability to grow, give birth to, and nurture new lives, women are endowed with a particular strength that sets us apart from men. This should be celebrated! I consider it lamentable and regressive to insist we can only fulfill our goals, find equality, and live with dignity by having the right to inflict violence on the tiny, vulnerable humans growing inside us. Widespread availability of abortion often causes women with an unplanned pregnancy to feel that abortion is their only choice, not necessarily because it's their desire, but because it's what our culture promotes and expects. We are taught that it's actually irresponsible to give birth to a child who may be poor, or fatherless, who will cost taxpayers money, or who may interrupt our education or affect our income and job performance.

Men and women, but mostly men, are affected by the abortion culture by carelessly pursuing frequent casual sex. Numerous sexual encounters with or without birth control, which often fails, and the refusal to mentally connect sex with the possibility of procreation, does as a matter of course lead to many unintended pregnancies; but these can be quickly dealt with by the convenience of abortion. An interesting statistic is that even among committed couples who go through an abortion, over 50% will break up not long after, attributing the relationship's demise to the abortion experience.

I am one of those women who has experienced an unintended, indeed a crisis pregnancy. In my early 40s, after just one foolish encounter with a “friend,” I became pregnant. When I gazed upon that white stick that indicated a positive result, I was stunned and grew frantic. Already a single mother, involved with the youth ministry at my church, financially deficient, living with my parents, and dealing with a host of health problems rooted in Fibromyalgia, I was a very poor candidate for new motherhood. I was also very embarrassed. After absorbing this shocking news, the father of my unborn child took me for a nice walk along the beach and informed me that he and his parents had a good discussion in which they decided the best solution for everyone involved was for me to have an abortion. I just shook my head, and I think I may have even laughed, confronting the stupidity of this scenario wherein a man who knew I was a pro-life Catholic had decided, along with his parents, that I needed to have an abortion. Enough said about him.

Immediately upon learning of the pregnancy, I went to see my parish priest at the time, desperate for wisdom and consolation. He was entirely supportive and was happy to inform me he had just spoken to a couple at our church whom I knew personally and admired and was informed they were unable to conceive and were looking to adopt. On the spot I knew that God had plans for the little one inside me, and it would involve asking this amazing couple to raise my child as their own.

For a variety of personal reasons, I chose to keep this pregnancy hidden from most people I knew, including some family members. It was a difficult and lonely time even though my parents were very sympathetic and helpful. I found strength and comfort in knowing I was doing God's will and that my “crisis” would bring others joy while giving my daughter the father and mother I wanted her to have and which I firmly believed God had chosen.

On January 20, 2005, with only the adoptive mother and my doctor in attendance, I gave birth to a perfect little girl. I was blessed with a relatively easy delivery. I stayed at the hospital for another hour or so, held my daughter briefly and wept, handed her over to her new mother, and went home.

During those few hours in the hospital, the joy of bringing a new child into the world was overshadowed by feelings of a gut-wrenching loneliness and loss. But this is often what love entails, isn't it? And that's exactly what the choice NOT to abort is — it's the choice to LOVE.

The surrendering of my baby that day wasn't heroic, as some have suggested to me, because the thought of abortion never crossed my mind, nor could I have lived with myself if I had resorted to that irreversible decision. It was simply a difficult experience I endured with the grace of God and the strength innate to every woman. The months of fear, loneliness, and sadness quickly transformed into feelings of gratitude and even a bit of self-satisfaction in the knowledge I did something really hard, came through it unscarred, and I gave people I cared about the best gift ever: a new baby. What I want other women to know is that if I could do this, they can, too.

My biological daughter is now a happy, kind, generous, intelligent, faithful, artistic, musically talented young woman who's brought so much joy to her adoptive parents and the two younger sisters who came along after (funny how that happens so often). I don't for one moment regret the event that led to her conception, birth, and adoption. God can transform any of our sins or crises into something meaningful and even magnificent if we let Him.

I will wind down by telling you that I never judge a woman who has had an abortion. Yes, I believe that what she did was wrong, but I'm not capable of knowing the state of her soul. More than anything, I feel compassion for women who felt compelled to make this terrible choice.

Lastly, if you managed to get through this letter, perhaps one of the longest ones ever written, you'll realize that there is much that is missing pertaining to the issue of abortion. That would take a book. If anyone wants to ask me any questions or challenge me, please feel free to do so here or by messaging me. Also, if you know anyone who is suffering as the result of an abortion or who is pregnant and needs assistance, please contact me, and I'll do my best to get her or him (men can suffer too after an abortion experience) the help that is available through a network of pro-life organizations with mandates to tackle these problems.

Thanks for reading. I hope we're all still friends.