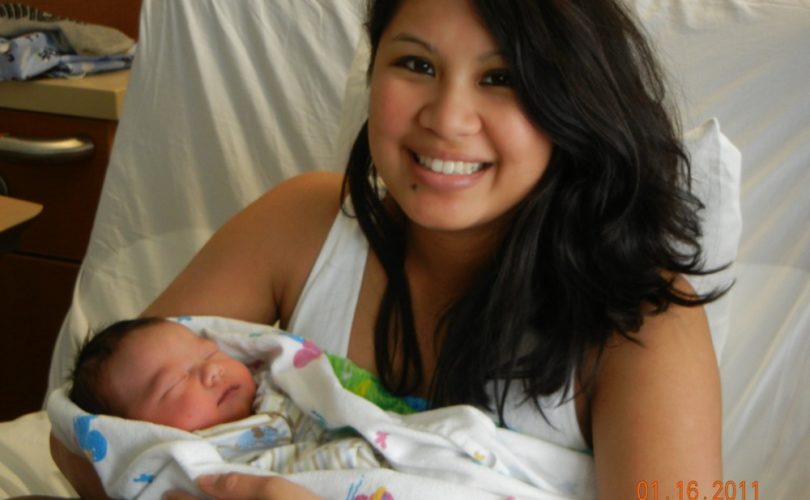 I couldn’t believe I was pregnant. “How did I get to this point?” I thought.

I had told my fiancé that I didn’t want to live sexually impure anymore: I wanted to wait until marriage. My conscience and deteriorating relationship with God were tearing me apart.

Then he violently raped me.

Similar episodes followed, even if it wasn’t the “if you don’t give it, I will take it” approach. Either way, they were all against my will.

During that time (winter '09/spring '10) I had discussed breaking up with him. Well, it really wasn’t much of a discussion. He duct-taped my wrists and my ankles, and I lay helplessly on the living room floor of his apartment.

I begged him to cut me loose. But he began to fill up a bowl of water. As he heated a metal spatula on the stove I begged even more, panicking. Eventually, he came over with the hot spatula, put the bowl of water in front of my face, dipped the spatula in the water so it sizzled, and said, “Now imagine how hot that’d feel on your skin.”

Thank God it was one of the two threats he didn’t follow through on. I had been hit with thick fiberglass rods, and punched. I was in a physically, mentally, verbally, and sexually abusive relationship.

I felt all my secrets were going to be exposed before I could “fix” them. How could I have a baby? I was the pastor’s kid who was supposed to lead by example. And now, here I was pregnant, not married, and caught in a web of lies. I was living in a mess and I was too ashamed for anyone else to know it. I felt I couldn’t bear to take on any more shame.

I never believed killing a baby in the womb was okay, and now I was faced with a life circumstance that would test me to the limit.

My parents were already in turmoil over my relationship. I couldn’t bear for them, much less all the other pastors and church district superintendents I knew, to find out I was pregnant on top of it.

“They can’t know! I don’t want anyone to know!” I thought.

I started to cry as the faces of all the people I had let down flashed through my mind, all the way down to the girls at the kids’ camp, where I had been a counselor.

To make matters worse, when I had talked about breaking up, my fiancé told me if I did, he’d walk through the halls of the Bible college I was attending yelling everything I’d done, and saying whatever else he wanted. They wouldn’t know what was or wasn’t a lie. Shame filled me once again. I could barely face people knowing what I had done. How could I face lies about what I hadn’t done too?

I decided to cancel my classes that semester (spring 2010), since I didn’t want to complete Elementary Education, and didn’t want to spend money on the classes for a career I was unsure about. I was also low on money after my fiancé “needed” over $1000 of my savings for rent. Besides, I didn’t need the classes to graduate with an A.A. in Biblical Studies/Generals.

The president, dean of students, office people, my parents, and staff were all against me ending the semester. They were baffled.

But beneath all the shame, agony, and hurt, I knew that the precious life within me was worth more than all of it. To kill my baby to “cover” my shame, mistakes, preserve finances, or to look better, would not solve the problem nor help it in any way.

My fiancé told me he was excited to be a father. He said during one speech that he wanted to be a good husband for me, and a good father to our baby. He apologized for not treating me as the treasure of a person I was.

Hope filled me. Maybe all would be redeemed after all. I could see the person I first dated returning.

Then he took me to a nearby field on a dark night and told to defend myself with a fiberglass rod he threw at me. I quickly picked it up and blocked his blow as he came after me.

I was three and a half month’s pregnant and terrified. I am normally a very fiery and aggressive person in sports, and a defender to other people, but it all changed when I found myself in a manipulative relationship with someone to whom my emotions were tied in mixed ways. I also didn’t want to hit him, because I was afraid the abuse would get worse.

I wanted to defend myself as I had before, but I was scared to leave my belly exposed. So I fell to the ground in a fetal position to protect my stomach, taking hits on my back, head, and arms. Finally, he stopped.

There is so much more to this story, but eventually we got married in hopes all would change.

I didn’t realize at the time how blind and trapped I was. I was just trying to survive. I allowed myself to see only hope and redemption.

When I gave birth to my son on January 15, 2011, my husband was not around. He was gone for about a month at basic training. When my son, Adriel (AJ), entered the world, I was filled with excitement and joyful! My parents were so proud and joyful to see him. They held him and shed tears. He was so precious to all of us.

Little did we know just how precious he’d be to so many people, even to strangers.

There are a lot of cute, sweet babies, but there was just something about AJ. It was like nothing I had previously worried about. There was no shame in looking at him. New feelings and new memories emerged. This was not pain and agony. This was a child who was so dear, so captivating!

At first, I assumed my feelings were the result of being the mother of this cute baby with amazing brown eyes. But more and more I saw how he captured people of all types. AJ really breaks down the walls that say nothing good come from rape and traumatic circumstances.

Society says, “Who wants this child?” “Who wants these memories?” “Do you realize whose kid I'd be keeping?” “I don't want that tied to me!” Even Christians have said these things and yet many have loved and wanted AJ. They can’t help but be drawn to him!

There are those who think abortion is okay, but who absolutely adore AJ, and cannot imagine me not having him, regardless of how he was conceived. He captures people's hearts in special ways, and his biological origins don’t matter. Pro-life and pro-choice people alike, who know me and who know him, would be horrified if I said about him what people say about unborn babies conceived in similar circumstances. They know that my son is someone of great worth.

Whether or not I wanted him does not define his character, value or worth. My emotions will never change who he is as a person, no matter what age he is. Who his biological father is doesn’t change that either. I am so proud of my son and the love he emanates. I am proud of how strong he is (and was in the womb!). I am proud of the joy he brings into people’s lives.

AJ tends to pick out people of all sorts who could use more inclusion and recognition, and tries to make them feel as great as he feels. One of the times my heart soared (and Papa’s and Nana’s too, when they saw this) was when he was two and a half years old, and he was in a stroller at the county fair. There was a handicapped man in a wheelchair who may have been born physically disabled. AJ picked him out and eagerly waved in such a friendly manner. The people pushing him were kind of surprised, and the guy gently waved back. Their family and our family were really touched by that moment.

I can’t imagine a world without him because he touches so many. And to think, he’s just getting started! Without AJ, all those moments would be gone.

Abortion not the answer

The memories I dealt with after leaving my ex-husband, and deal with now, I would have dealt with anyway…baby or no baby.  We don’t always know what the future holds, but statistics have shown that having an abortion after being raped actually leads to a higher risk for suicide as well as even more pained memories (more so than if the mother had carried the baby conceived in rape to term).

To make a decision on killing a baby in the womb because we think everything is going to turn out a certain way, or a better way, is often very misleading. When I look at my son I feel the same love that any mother does. I don’t see the memories or the pain. I don’t feel regret or hurt. I feel freedom, and I feel blessed.

To the mothers who are debating abortion, especially in a rape situation, please, hear my story today. There is support and guidance out there. There is also adoption. Adoption is close to my heart because I am adopted. Giving your child a chance at life is such a gift, not just for the child, but for yourself too. For all the pain you’ve gone through and are going through, I want to encourage you. Your life is not over, you have a future, and it could just be the beginning. My son, AJ, was my beginning.

For the mothers out there who have had an abortion, I hold no anger against you. My heart weeps with you over the loss of your child. Some of you weep, some of you bury your agony. You can get through this pain of the past and the present.

Some of you have never had someone tell you that they love you and cherish you, and it’s so hard for you to love others, much less a baby, when no one has poured that love into your life. They said you were nothing, and that you’d never amount to anything. They said they hated you and never wanted you in the first place. You were told you were worthless and stupid.

I want to say, “I love you.” You are wanted. You are of worth. You are of value. You are in my thoughts.