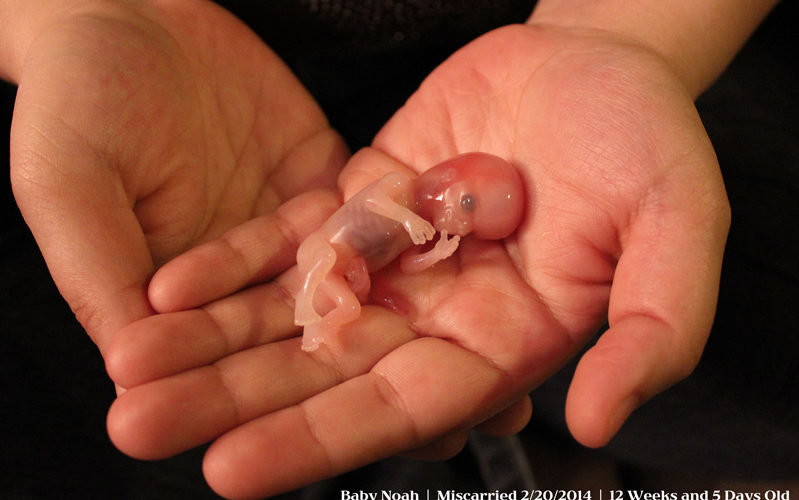 March 10, 2015 (prolifehumanists.org) – I do public pro-life activism on a regular basis, but I’ll readily admit that I don’t always enjoy it.  The sun irritates my migraine-prone eyes and head, cigarette smoke, as well as perfumes and car fumes, routinely burn my lungs and make me nauseous, and by the time our activism is over, my feet and legs are sore from standing in one spot. If all that weren’t bad enough, I really can’t say I enjoy having complete strangers yell and curse at me for a couple of hours as I try to engage passersby in productive discussion about their beliefs on abortion.

I wasn’t feeling particularly effective one late August afternoon while I was engaged in a Choice Chain display as part of the Canadian Center for Bio-Ethical Reform’s 2014 Crash Course – a week of intensive training. While I do enjoy a healthy discussion/debate and had really wanted to practice my newly acquired pro-life arguments, the crowd we faced that humid afternoon was hostile, and I found myself longing for the end of our activism time, and for our return to the shade and air conditioning of the training locale.

No one in the downtown square that day seemed to want to talk about the morality of abortion itself – they all seemed more upset that children might see our abortion images than they did about the fact that 300 Canadian children per day were being dismembered and killed by the procedure shown in the images.  I felt like I was wasting my time and giving myself a headache for nothing.

As we neared the end of our activism time, I stifled my annoyance over the lack of productive dialog as I explained to someone for what seemed like the countless time that if there was a way to show these images only to adults and to women considering abortion, we would do that. It is indeed unfortunate, I told the gentleman before me, that some parents might be called upon to explain to their young children that while they are loved and safe, other babies aren’t being protected, and the people showing the pictures are trying to help save those babies.

Undoubtedly, some parents’ frustration has less to do with the kids’ reaction (the younger of whom are more confused than disturbed) and more with their own guilt at having to justify their legal support of what their older children can recognize as an act of violence against babies.  Nevertheless, lives take precedence over feelings. “We’re here in the public square because a lot of people don’t know what abortion does to pre-born children.” I told the man. “Any one of these women walking by our signs today might be pregnant and may reconsider doing this to their pre-born as a result of seeing these pictures.”

“Yeah, and I’m one of them,” said a soft-spoken woman who’d been listening in, unnoticed by me until then.

The angry man I’d been engaging vanished into thin air as I took the young woman aside and encouraged her to share her story. She was in an abusive relationship and her partner was threatening to kill her if she didn’t “get rid of it”. She was afraid to leave him or to report the abuse to the police for fear of getting him in trouble – a classic abortion advocate’s case study of a woman who “needed” an abortion because of circumstances unsuitable to the presence of a child. Instead she’d found in us a group of people who wanted to help her kill her difficult circumstances rather than kill her child (and possibly remain in her detrimental circumstances with a bad-news man).  She’d been unable to leave the abusive relationship for herself, but once I helped her realize that she was a mother and now had a duty to her child as well as to herself, she found the courage to leave the abuser and to choose life for her child.

Over the past 7 months I’ve stayed in regular contact with the young woman, doing what I could to ensure she was in a safe place and had access to the support and resources she needed.   Yesterday  morning I awoke to a delightful text message with a picture of baby Noah, born March 4, 2015. It was followed some time later by another text: “Very tired… In pain but so happy I had him! I am in love now with him!”

From now on, when people tell me that public displays of abortion victims accomplish nothing, or that we should keep our signs out of the public square, I will show them this picture of Noah –  a bundle of beauty who had been days away from becoming dismembered medical waste when his mother saw images of abortion victims and allowed him to keep living.

And when I’m tempted to stay home from pro-life activism because I don’t think I’m at my physical and mental best, I will recall that August day and realize that the pictures speak for themselves –  if we simply dare stand up and use them.  We don’t need to always enjoy public pro-life activism, but for the sake of all the Noahs and their mothers out there, we do need to do it!

Reprinted with permission from Pro-life Humanists.