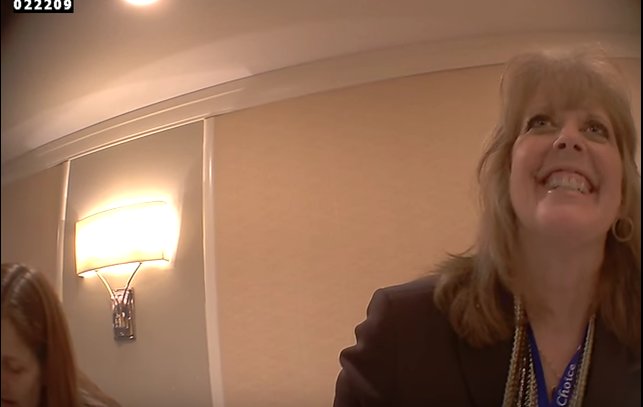 October 27, 2015 (TheBridgehead) — After almost a dozen Planned Parenthood videos, it seemed like some of the legal debris the National Abortion Federation and Planned Parenthood were frantically flinging at the spokes of the Center for Medical Progress had finally succeeded in slowing down the torrential outpouring of revelations that was leaving the abortion crowd gasping. A court order blocked much of the CMP’s footage, but the judge ordered the video turned over to Congress to be reviewed in their investigations of Planned Parenthood. Somehow, somewhere, some Congressional staffer, or perhaps even Congressman, got so infuriated by what he saw he leaked hours of undercover video coverage online, where it can be downloaded in a giant torrent or viewed on YouTube.

There’s a lot of footage to review, and I realize that most people aren’t going to wade through it all, so I’ve decided to watch all of the video and publish my summaries here. If you’re a journalist type, you’ll enjoy watching the full videos—even the angled footage of Robert Daoud Sarkis of BioMax, aka David Daleidan of the Center for Medical Progress, getting outfitted with cameras in the hotel room where the National Abortion Federation conference was being held is fascinating—and for a pro-life activist, more than a little satisfying. The videos are packed with fascinating insights and information, but I’ve tried to narrow the first few hours of footage, from the four videos “2nd Trimester Provider Self Care,” down to the most compelling information.

This is what passes for a joke at an abortionist conference. The unseeing eyeball of a baby falling into the lap of the woman who just crushed her skull.

The first video, a half hour long, begins with Daleidan getting ready and then heading off through the hotel. Every few feet, it seems, he runs into another abortion provider—and the depth of his research is revealed by how he greets them. He knows the woman on the elevator, and on the stairs—“Are you Dr. Dry?”—and in the hall. One abortion provider comments that she’s very interested in talking to Daleidan about fetal tissue procurement, but that they do “have researchers tripping over each other” to harvest baby parts at her clinic. Daleidan then heads down a glittering hotel hallway towards his BioMax booth, a pro-life warrior in what looks like a high-end video game. For some reason, the shimmery, high-end hotel room was jarring in contrast with the casual, lighthearted conversations about fetal meat markets.

At the BioMax booth, Daleidan ran into Dr. Cheryl Chastine, a young, pretty abortionist who now performs the abortions in Wichita. Here, Daleidan’s ability to connect with those he is observing and recording is on full display: He chatted with Chastine, the empathy in his voice for the “harassment” she has to deal was clear. When he mentions that he recently watched After Tiller and thanked her for her perseverance, her facial expressions open up visibly. It’s not hard to see how Daleidan managed to get so many intimate conversations on camera. They do abortions up to 24 weeks in Wichita now, Chastine tells Daleidan, since the 22-week abortion ban came into effect. Forty to fifty patients a week. The cacophony of laughter in the background of this conversation is eerie. With a pleasant abortionist and a pristine hotel hall, it’s almost easy to forget that we’re talking about dead children.

The conversation wraps up, and Daleidan and his female colleague head off to an NAF panel talk on “Second Trimester Provider Self Care”—basically, a workshop on how to help abortionists who abort bigger babies avoid burnout. Only for a minute does Daleidan reference the cameras—“Sit in different places for different coverage?” he mutters to his colleague, and then changes his mind immediately. That would probably look too suspicious.

Dr. Lisa Harris, an abortionist who has operated in Michigan for almost twenty years, starts off the panel discussion on “provider care”—she studies abortion provider stigma and researches rather grotesque questions such as, “What’s it like to be pregnant and providing abortions?” In other words, what’s it like to tear the children of other women apart while your son or daughter is obliviously safe in your own womb? Harris, predictably, doesn’t see it that way. “The work that we do,” she says reverently to affirming mhmmms and nods, “its sacredness, its great rewards.”

Dr. Harris’s mewling insights continue in the second half-hour video, where she reveals, contrary to research emphasized by abortionist Warren Hern, that abortion workers have “higher compassion satisfaction than other healthcare workers” and experience lower rates of burnout. This is in spite of the fact that abortionists feel “stigmatized, marked, marginalized.” Why? Well, “When I park at the hospital, I have to walk past bumper stickers that say Choose Life or Abortion Stops A Beating Heart,” for example. Harris’s talk ends with much applause from the stigmatized abortionists in the crowd.

The next panelist is Dr. Glenna Halverson-Boyd, the wife of the infamous late-term abortionist and NAF founder Curtis Boyd, who once casually admitted, “Am I killing? Yes, I am. I know that.” Halverson-Boyd launches right into a condemnation of anti-abortion harassment—the gall of those people, disrupting all the killing—and specifically mentions the dogged work of Operation Rescue. I wondered at this point how David Daleidan, who plotted out his undercover work with Operation Rescue’s Troy Newman, felt sitting in the audience. The Center for Medical Progress was in deep. Daleidan applauded with the rest.

How successful are anti-abortion forces? Halverson-Boyd’s voice actually actually broke as she said, “Texas: Women’s rights successfully aborted.” Her speech carried on into the third video, where she advised coping through snuggling with pets, spouses, or lapsing “into denial if necessary.”

After the snuggle-therapy advice, abortion clinic owner Mona Reiss of the Presidential Women’s Centre in Florida took the mic to decry the “inherent injustices we have to deal with to do what we do.” As it turns out, she wasn’t talking about chopped-up kids. She was referring to anti-abortion protestors who didn’t approve, and were vociferous about it—“no good deed goes unpunished” she noted glumly to the self-pitying nods of the abortionists in the crowd. Then, hilariously, she announced to a somewhat awkward silence that she wanted to deal with “the Planned Parenthood issue.” And what was that? Well, as it turns out, Planned Parenthood’s huge abortion centres are becoming huge competition to the smaller, independent feticide centres. Reiss, and others, feel “betrayed” by this.

After all, Reiss points out, if Planned Parenthood’s mission is to help low-income women who don’t have access to abortion services, why are they starting abortion centres in places with already well-established clinics? The answer is insinuated, although unspoken: Planned Parenthood is trying to corner the abortion market, driving independent abortionists out of business in the process. A culture without morals meets capitalism without ethics, and the mass production of tiny corpses is fierce competition. Based on the length and enthusiasm of the applause for Reiss, many of the abortionists in the room agreed with her.

The fourth video began with the insights of Dr. Uta Landy of the Family Planning Fellowship, who is actually married to notorious abortionist Philip Darney. Landy wanted to highlight the fact that abortionists need safe spaces, and have to be able to vent honestly about their work. One woman she was chatting with, she told the crowd, seemed to find abortion controversial, making Landy hesitant to mention her own work. And then, whaddaya know, that very same woman had had an abortion herself! This brought a roar of laughter for some reason. I suppose comic relief is hard to come by at a feticide conference.

Landy then began to read off a number of complaints that she had heard from various Second Trimester abortionists—“I don’t like saying I’m dismembering a fetus.” Landy’s follow-up comment: “Mind you, that is how she has to talk to the resident, the learner. She’s discussing the procedure—she’s dismembering the fetus. It’s very normal.” And appallingly, so it is. But that said: “I don’t like saying it. It makes me feel bad.” Why? “I find second trimester abortions grotesque.” And: “My coping mechanism is to focus on the baby fetus—reverence for something that was once alive, and now, it’s not.”

The video was hard to watch at this point. The self-pity was nauseating. Dr. Landy decided it was time for a bit of humor. I remember one time, she revealed with laughter in her voice, “an eyeball just fell down into my lap—and that is gross!” A roar of laughter.

This is what passes for a joke at an abortionist conference. The unseeing eyeball of a baby falling into the lap of the woman who just crushed her skull.

The final panelist is a male abortionist, Dr. Cassig Hammond of the Northwestern University Feinberg School of Medicine. He wanted to talk about the traitors in the medical field—those who thought abortion workers were somehow less important than healthcare workers that practice actual health care that saves the lives. He talked about one particularly late-term abortion, and then said incredulously to the groans of the sympathetic crowd that he “got a call from the hospital [saying] there’s been a complaint against you—a nurse is saying you killed a baby!”

Hammond knew this wasn’t true. “[The nurse] said the fetus had been born alive. Well, we crushed its skull, so that’s simply not true.”

Let that sink in for a moment. All this talk of dismembering, and skull-crushing, and eyeballs without heads, is not anti-abortion propaganda. It is pro-choice practicality.

Do the abortionists care if they are killing babies that could survive outside the womb? According to Hammond, medical professionals asking him why they do abortions at 24 weeks when the hospital is doing C-sections at 22 weeks is simply “fallacious.” He felt no need to elaborate. It’s simple: The point of an abortion is to kill the baby. The survival of the child would be directly contradictory to the desired end.

A moment later, Hammond confirms this in the bluntest terms. “We do recommend feticidal injections be avoided after a certain gestational age, but interestingly, only because we don’t believe we can guarantee, at the extremes of gestational age, that they won’t be subject to resuscitation against the patient’s wishes.”

As I said to one of my colleagues last night, the most chilling thing about these first few hours of video by far is the fact that nothing in these videos was considered to be a shocking or newsworthy revelation. This is par for the course. Eyeless babies. Severed arms and legs. Bashed-in skulls. Poisoned infants. Nothing to see here, folks. The news won’t report the baby that lost its limbs or the society that lost its soul. Such things don’t end up on the front pages anymore. They’re only fodder for discussion at a panel discussion on how the killers can avoid high stress and burnout.