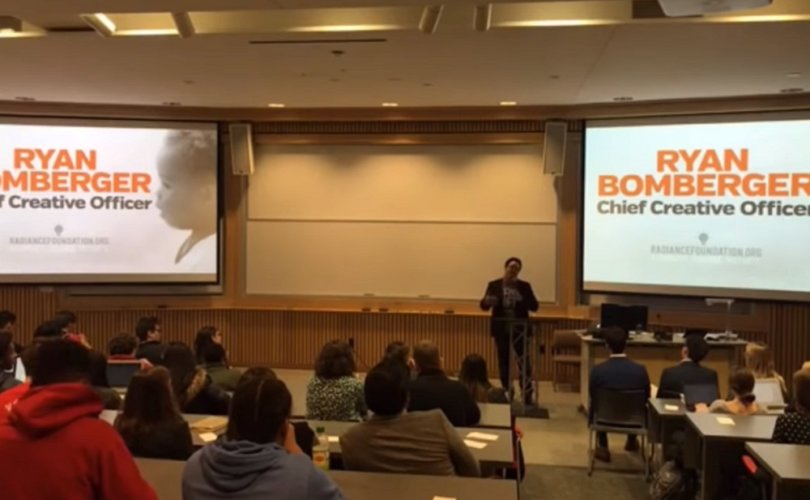 December 6, 2018 (Radiance Foundation) – For Christ and His Kingdom. That's the motto featured prominently throughout Wheaton College.

But what happens when it's not about Christ or His Kingdom?

I found that out recently after being invited by Wheaton College Republicans to speak on something I'm deeply familiar with – abortion and race. As someone conceived in rape yet adopted and loved into a multiracial family of 15, I have a rather unique take on this. I love actual diversity. As a biracial individual, it's literally in my blood.

I presented a multimedia talk entitled: “Black Lives Matter In and Out of the Womb” (see video) which provided a perspective that is rarely heard. I wanted to compel students to critically think.

Instead, some wanted to silence the message and smear the messenger.

The Student Government Association (SGA), reportedly with the help of two staff members (Peter Hansen and Crystal Cartwright) of the Office of Student Activities, sent out a dishonest, campus-wide email denouncing me and the hope-filled, fact-based, Biblically-sound presentation. Signed by student leaders Lauren Rowley (Student Body President), Tyler Waaler (Student Body Vice President) and Sammie Shields (EVP of Community Diversity), the letter claimed that my comments “made many students, staff and faculty of color feel unheard, underrepresented and unsafe on our campus.”

Of course, they didn't identify me as a “person of color” (isn't everyone a color?). In my emailed response to SGA and administration leaders, I reminded them that my presentation was about those who are always unheard, always underrepresented and actually unsafe – the unborn.

But let this sink in. Sharing a different perspective (aka speaking truth) made “many” feel “unsafe”. Wheaton, are you teaching students to fear or to think?

Only one of those five people involved in this letter of denouncement even attended the event (Sammie Shields). The presentation was 50 minutes, followed by nearly an hour of Q&A and discussion. How was anyone “unheard” or “underrepresented”?

I asked Philip Ziesemer, the Founder of the College Republicans, his reaction to SGA's attack. “I'm disappointed by the school's response because I do not believe Wheaton College wants to restrict students from taking part in open dialogue…I believe free speech is threatened when someone with a different point of view is accused – in print – of making students feel 'unsafe' and 'underrepresented.' I wish the school would have responded by encouraging students to think critically, discuss the message from both sides, and challenge themselves on the content presented.”

Sadly, it was clear that even on an evangelical Christian campus, truth is anathema to those who deify “diversity”. In a presentation on what Jesse Jackson once called “black genocide“, those who prefer activism over factivism chose to demonize and distort. The talk focused on the hypocrisy of the #BlackLivesMatter movement's leadership and its announced solidarity with the leading killer in the black community – Planned Parenthood – where 247 black lives are killed by the abortion giant every single day. I pointed out several disturbing policy platform positions (see www.M4BL.net) that are, inarguably, hostile to Christianity such as the negation of fathers, the promotion of radical LGBTQ ideology, and lack of any call for racial reconciliation.

I refuse to bow to groupthink. And that never goes over well with those who think “diversity” means ideological conformity.

When you can't prove the content wrong, the tactic is to make things up. I can't rebut every lie I've heard and seen posted on social media since my November 14th presentation. Some have claimed that I said, “no one cares what the KKK believes”, “racism doesn't exist anymore”, and “women should think twice about reporting sexual assault.” Of course, I never said any of those things. One of the student leaders (Sammie Shields) made the bizarre claim, in order to bolster his false narrative about what I said about the KKK, that “there was a lynching in Mississippi last week”. Really? Wouldn't there be at least one news article on that? But it doesn't matter. “Diversity”!

The story has now become the “hurt” and “grieving” students. It's not about the slaughter of 2,500 innocent human lives every day in this country through the violence of abortion. This is the dangerous consequence of placing the emotional above the Eternal.

And all the while, the Wheaton administration has chosen to be publicly silent which enables more of the #fakenews to emerge.

The Wheaton Record tried to justify SGA's irresponsible letter of condemnation. The school paper simply casts me as “controversial”. Being prolife is controversial. Being a Christian is controversial. They referenced my speech at Harvard as an example similar to Wheaton – an event where pro-abortion activists melted down throughout the event because they hate a pro-life worldview. That was nothing like Wheaton. Then they cited my speech at Vicksburg High School where the administration published defamatory statements on Facebook and in a school-wide email to students and parents saying I didn't deliver the presentation that was approved. The Wheaton Record doesn't tell you that less than two weeks later the school issued a formal apology for lying about all of it. They praised me for being a “dynamic motivating speaker who touched the hearts of many in the audience.”

Do you see a pattern here at Wheaton? Some want “diversity” and faux “unity” so much they're willing to sacrifice the truth, no matter whom it actually hurts.

Vice President of Student Development, Paul Chelsen, and Provost Margaret Diddams only responded to our communications fifteen days after the presentation. That was only because our third email indicated we'd publish an article about it all. They, then, agreed to discuss this whole matter. When we requested that one of our Board members be able to join the off-the-record conversation, they refused to talk at all.

The school administration chose not to pursue a Matthew 18 model of conflict resolution and allowed a fellow evangelical Christian to be slandered and treated like the enemy. They could've made this a powerful learning opportunity for the entire school.

They chose to bow to the Deity of “Diversity” instead.