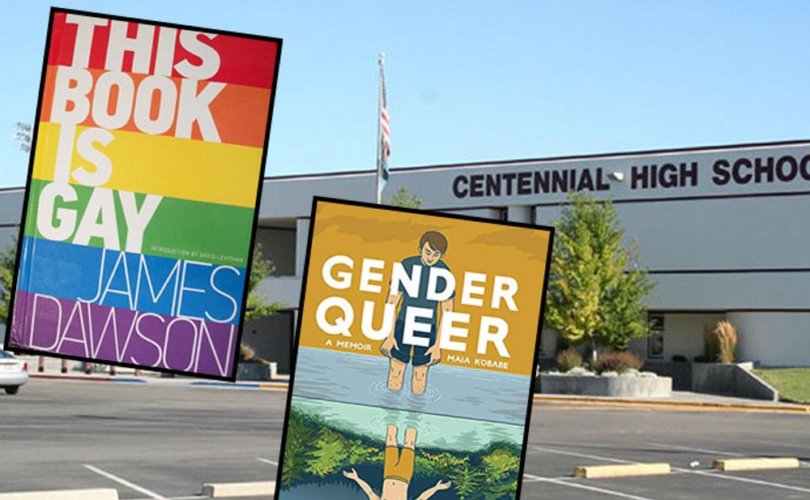 (MassResistance) – Too many parents think that it’s impossible to “win” when it comes to removing horrible books in children’s libraries. But it really is doable!

In Idaho, a half-dozen outraged local parents on a local MassResistance team recently forced a high school to remove two pornographic LGBT books from the school library. And they plan to force more out soon. This was done even though the leftist principal, school counselor, and other staffers did their best to keep the books in.

Centennial High School is located in liberal Boise, ID. However, it’s part of the West Ada School District, which includes several conservative suburbs. Earlier this year, after reading about the toxic LGBT books targeting children in schools around the country, our local parents investigated and found several of them in Centennial HS library.

They were very upset that their local high school was providing this horrific material to the students. They decided to focus on the two worst: Gender Queer and This Book Is Gay.

This Book is Gay is a pornographic “how-to” book for teenagers on homosexual sexual practices and perversions. All forms of “gay” and “lesbian” sex are endorsed and celebrated with graphic instructions.

A conservative majority had just taken control of the West Ada School Board in November 2021. In addition, the Superintendent was fairly conservative. But unfortunately, our team found that they were not interested in doing anything about these books – at least at first.

But during February and March of 2022, our half-dozen local Idaho MassResistance parents relentlessly pushed their message. They were allowed only very limited time to testify at meetings. But they emailed the School Committee members, called them, and set up personal meetings.

The School Committee eventually agreed to order the high school to go through its removal process for the two books.

However, for any books to be reconsidered, a laborious process had to be followed. First, an informal committee of seven members of the high school staff would vote on the book. If they failed to reject it, a nine-member formal committee would then decide. That committee would include four school staffers and five parents, with each parent appointed by one of the five School Board members.

The first book, Gender Queer, was kept by the first committee by 4-3. But the second committee, which included parents, voted to remove the book by 7-2.

The second book, This Book Is Gay, was also kept by the first committee by 4-3. But in the second committee, the five parents outvoted the school staff 5-4 to remove it.

For the record, the four high school staff members who consistently voted to KEEP the books were the principal, the school counselor, the library coordinator, and the library media specialist.

However, the MassResistance team wants to make it easier to remove obscene books. They are working with the School Board members and Superintendent to streamline the book reconsideration process. As soon as that’s in place, they’ll get to work on the rest of the inappropriate books they found!

And of course, those books should never have gotten into the school in the first place. After receiving results from a FOIA request regarding how those two books entered into the West Ada School District, the staff and administrators could not (or more likely, would not) determine who brought the books into the school district in the first place, and the process used. (Was it a recommendation from the American Library Association, or LGBT groups? etc.) We need to get to the bottom of that!

This is what just half a dozen parents can accomplish! You don’t need a group of hundreds.

We should all be angered that the high school principal, counselor, and others all consistently voted to keep these disgusting books in the hands of their students. That’s a huge problem. Those people should not be in charge of teaching children. We wouldn’t need a process for removing obscene books if we had normal people with common sense running our schools and libraries.