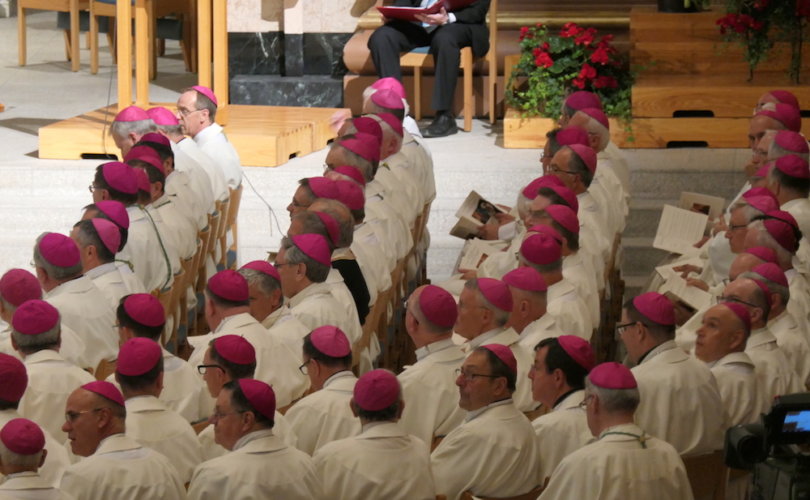 October 30, 2018 (LifeSiteNews) – The Catholic Church teaches that the state is supreme in temporal matters. However, what’s to be done when the politics of the day enjoin religious proclamations (such as “women have the right to kill their unborn babies” or “men must embrace the sin of homosexuality rather than simply loving the sinner”)? When politics crosses into religious territory, it claims supremacy over the human soul. Church proclamations against candidates and parties that compete with religion are not entering into political battles but fighting against religious rivals. Rebuttal has both temporal and eternal consequences for all.

“The grave danger today is not religion in politics but politics in religion.” – Venerable Abp. Fulton Sheen

The Democratic Party has been the champion of the culture of death for more than 45 years since Roe v. Wade. With their sponsorship, American culture has embraced in varying measures abortion, euthanasia, embryonic stem cell research, and homosexual “marriage.” To this day, Democratic Party platforms at all levels call for taxpayer-funded abortions! Throughout this time, the bishops of the Catholic Church in America have proclaimed a moral silence on this truth to avoid meddling in politics. Is it any wonder Western Civilization is crumbling in moral decay?

“The only thing necessary for the triumph of evil is for good men to do nothing.” – sometimes attributed to Edmund Burke

According to Scripture, there are four sins that cry out to God for vengeance: murder (Gen 4:10), sodomy (Gen 17:20-21), oppression of orphans and widows (Ex 2:23), and cheating laborers of their due (James 5:4). The first two of these are agenda items in the Democratic Party platform. As “intrinsic evils,” they are fundamentally in conflict with the moral law and always wrong no matter how they are conducted. There is no “right” way to do either of them.

The latter two are subjects for public policy debates. No political party has a plank in their platform advocating for the oppression of orphans and widows or the cheating of laborers. These sins are only an issue in any election to the extent of conflicting perspectives on public policy. There may be disagreement on how a party or politician goes about caring for orphans, widows, and laborers – but these are public policy debates, as none of the politicians are actually endorsing these particular intrinsic evils. Those in the Church arguing for the “Seamless Garment” approach err in giving equal weight to all of these issues.

Catholics represent as much as 25 percent of the electorate overall and as much as one-third in California and New York. No politician should be able to advocate for intrinsic evil and expect Catholic votes – no politician can be elected without Catholic acquiescence in a national or state election. Yet, Catholics have split their vote down the middle for a number of election cycles. No one respects Church priorities because Catholics as a group don’t stand for them. Unfortunately, most bishops have done next to nothing to correct this problem. Too many bishops spend political bandwidth explaining the priorities of the Church regarding immigration reform, publicly-funded healthcare, and climate change.

The bishops must speak out about real and threatening evil.

The Church should absolutely not tell people for whom they should vote, nor should it endorse any political party. However, when a political party stands for intrinsic evil as part of its mission outlined in party platforms, it deserves condemnation from the bishops. That political party has stepped into the Church’s realm of authority. Bishops would not be talking politics in rebuttal but rather defending human life and dignity. Given the strength of the Catholic vote, such a condemnation should be electorally fatal. Any political party wanting power would have to cease supporting intrinsic evil in order to recover from such a sanction.

Is it wrong to name the political party in condemnation? Is that painting with too broad a brush? No one is saying, “Democrats are evil.” Abortion is evil and it is an agenda item in the Democratic Party platform.

A preferred candidate is a pro-life Democrat? That doesn’t exist in this environment. Why? The first vote taken will be to elect the leadership of the Congressional chambers. A “pro-life” Democrat will put Nancy Pelosi in charge in the U.S. House and Chuck Schumer in charge of the U.S. Senate and they will implement the party platform.

Dissenting bishops and priests often quote the need to maintain the Church’s tax-exempt status. How free is the Church when Her bishops consider themselves subject to the rules of government? The Church was tax-exempt before churches were added to the tax code in 1954.

The Church is tax-exempt because She pre-dates the government and the Founding Fathers did not want to have government control of churches. It’s that simple. The 501c3 code is a primary example of the way government takes control. Government says it is merely codifying an existing relationship and nothing will change.

However, once codified, the government holds the threat to rescind the code. What should exist after the rescission is what existed for 200+ years before that – churches are still tax-exempt. That is not what the government says will happen, though, so the bishops comply.

Churches were added to the 501c3 code as a tool of control and specifically to silence the Church and other non-profits that were influential in the public sphere. Then-Sen. Lyndon Johnson did not like such organizations having a significant influence in shaping public policy. Now, the Church has a greatly-reduced influence in public life and intrinsic evil has become a staple of public policy.

Note that churches do not have to apply for 501c3 qualification. Almost all qualifying organizations must fill out IRS Forms 1023 and 1024. Churches are not required to file form 1023 because they are considered covered by 501c3 automatically. Donations to churches are automatically tax-deductible. Churches have a mandatory exception to filing tax returns. The IRS code automatically exempts churches from its basic requirements.

In short, the Catholic Church in America is voluntarily silent…and misguided. It is not an endorsement of the GOP to point out the evil supported by the Democratic Party. Bishops don’t compromise their impartiality by opposing the sponsors of evil in positions of public authority. They have compromised their authority in failing to do so. Will the GOP benefit from such condemnation in a two-party system? Yes. Should this potential indirect benefit silence the bishops? No.

In the absence of these truths coming from the bishops, liberal Catholics are following the lies of slick politicians and the biased media. They have been taught to form their own consciences and the USCCB’s voting guide has been written vaguely enough to give cover to any position and rationale. Buried in the middle of “Forming Consciences for Faithful Citizenship” is the statement “Abortion, the deliberate killing of a human being before birth, is never morally acceptable and must always be opposed.”

This should be in the front of the guide as the first hurdle any candidate or party must cross before soliciting Catholic votes. The Democratic Party is the greatest advocate for abortion outside of the Chinese government and they should be opposed by Catholic voters according to the bishops’ own guide. It’s time the bishops preached this simple truth and acted to protect human life in the womb.

Unless bishops speak out forcefully, half of American Catholics will continue to support the sponsors of the culture of death with the blessing of their consciences… to the eternal peril of their souls.

“If I say to the wicked, you shall surely die—and you do not warn them or speak out to dissuade the wicked from their evil conduct in order to save their lives—then they shall die for their sin, but I will hold you responsible for their blood.” – Ez 3:18

This may seem like the wrong time to be on this message with the Church in the throes of crisis… but these issues are related. In the Fall of 2016, a local priest gave a homily where he laid out these issues and named the Democratic Party as the sponsors of these intrinsic evils. The congregation stood up and applauded. Why? Faithful Catholics know these truths. It shouldn’t be so Earth-shaking to hear it from the pulpit. But it is. The faithful long for truth (especially difficult truths) from the Church. Where else can they turn? The Church failing to stand for truth – all truth – is a scandal of its own.

The Church’s moral authority has been hurt by silence. The lies and coverups of abuses are only another manifestation of this silence.

The Supreme Court is changing, and that is good. How bad will it be for the Church, though, to not be seen as relevant as Donald Trump in standing for human life in America? It isn’t enough that abortion is narrowly defeated in its next Supreme Court challenge? The challenges will simply continue until the court is sympathetic again. The sponsors of the culture of death must know that the Church will stand against them as long as they promote abortion and other intrinsic evils. They must know this will doom any campaign. This is a lasting testimony to them and any other party seeking power. It is a pro-life legacy for generations.