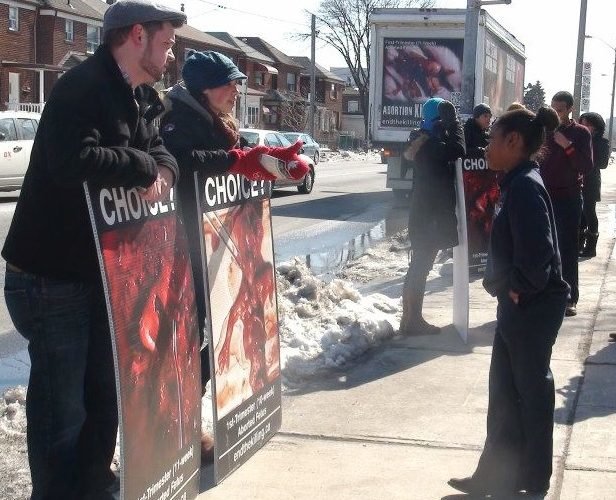 I get to talk to lots of different people. Pro-choicers, pro-lifers, people who are angry, people who are frustrated, people who have had personal experiences with abortion. These conversations aren’t easy, but often they end up being valuable ones to have. Anger, I can work with. Frustration I can understand. Personal experiences I can empathize with.  None of these responses confuse me, or worse, make me angry. There is one, though, that does both, and that’s apathy.

Apathy from pro-choicers is, quite frankly, terrifying. One of the scariest experiences I had is when I asked a woman, “What do you think about abortion?”, and she replied, “I’m pro-choice.”

“What do think about this image?” I asked, pointing at the picture of an abortion victim that I was holding.

“Why is it disgusting?”

She looked at me like I was stupid and snapped, “Because it’s a mangled, dead baby, that’s why.”

“Do you believe that abortion kills a baby?”

“Yes, of course it does. Anyone who’s seen an ultrasound can tell you that.”

“If abortion kills a baby, a human being, wouldn’t you say that abortion is a human rights violation?”

She thought about that for a second, and I held my breath. Maybe we would get somewhere. But then she smiled and said, “Look. Abortion kills a baby, a human being, right? Well, I’m cool with that. If it makes a woman happy to get rid of her kid, she should do it. I don’t see why you’d stress out about it.” And before I could reply, she walked away. Mind you, I don’t think there was anything I could have said, anyway. I was stunned. I had just met someone who didn’t try to hide abortion with pretty words, and claim faith in reproductive rights. She believed that every time a pre-born child is scraped from her mother’s womb a human being is directionally and intentionally killed, aka, murder. And, in her words, she was, “cool with that.” There are no words for a position like this. There was no way that I could have said anything that could have changed her mind. All I could do was hope that she didn’t really mean it.

Apathy from pro-lifers is just as–if not even more terrifying–than the apathy of pro-choicers. Conversations with such people go something like this:

“What do you think about abortion?”

“Great! Me too! Are you pro-life in all cases?”

“Have you ever thought of doing something about abortion?”

“Did you know that 300 babies are dying every day in Canada alone? Don’t you think we should be doing something about it?”

“Not really. People are going to die, right? So like, people shouldn’t kill babies and stuff, but they’re always going to. So I don’t see the use of even bothering to do anything, you know. It’s life.”

And again, I’m left speechless. I mean, really? People are always going to be dying? Is that a legitimate response to a human rights violation?

And then there are the people who pretend that they never knew, that they never saw, that they never really understood what was going on. There are times when I’m in Wal-Mart, or Boston Pizza, or university and I want to play the sound of babies screaming over the loud speaker, and when customers and students struggle to make the crying stop, and turn to ask me why I’m not joining in their efforts, I’ll shrug my shoulders, plug my ears and say, “What crying? There is no crying.” It’s a ridiculous idea, of course, but I guess it illustrates the point that saying something isn’t happening doesn’t mean that it isn’t.