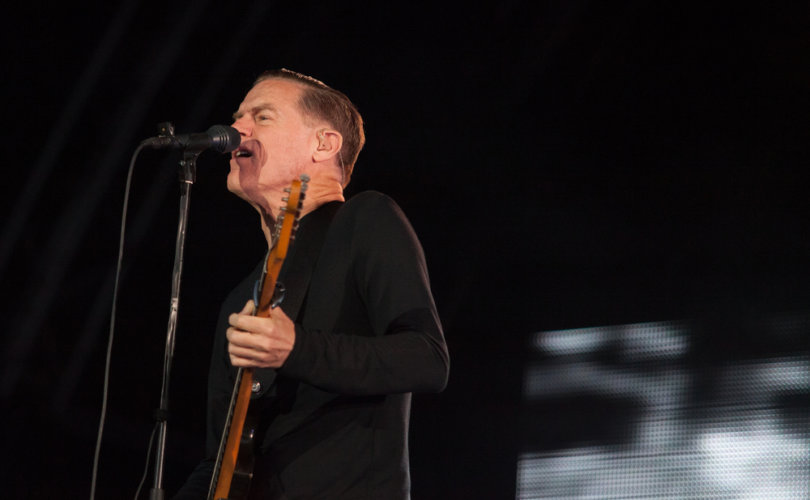 Bryan Adams cancelled his concert in North Carolina saying that he could not in good conscience perform in a state where certain people were being denied their civil rights. Paul Keeling / Shutterstock.com

April 13, 2016 (Daily Signal) — If it wasn’t for double standards, some liberals would have none at all. That seems to be the lesson from the past few weeks, where liberals have displayed three distinct forms of hypocrisy.

Liberal governors and mayors signed travel bans to North Carolina and Mississippi, CEOs of major corporations pledged boycotts and relocations, and Bruce Springsteen and Bryan Adams have canceled scheduled concerts in those states.

At issue are a Mississippi law that narrowly and carefully protects the rights of religious charities, small businesses, and select public servants and a North Carolina law that reasonably protects privacy and safety in public restrooms, while leaving private institutions free to set their own bathroom policies. These laws, apparently, are now unacceptable to some voices on the left.

But are they really? The hypocrisy in their opposition suggests otherwise.

Liberals decry the influence of big business and big money in politics. They denounce, as a direct threat to democracy, the ability of corporations to engage in issue advocacy. They argue that politicians must answer to the people, not the highest corporate bidder.

Or at least that’s what they used to say. Liberals are now cheering Apple, PayPal, Salesforce, and countless other giant corporations threatening legislators and governors with boycotts if they pass popular laws that the left disapproves of.

These corporate elites didn’t win an argument about good public policy. Instead, they threatened to boycott and transfer jobs out of states if the politicians didn’t do as they insisted.

This economic coercion is a form of cronyism—cultural cronyism. Big businesses use their outsized market share to pressure government to do their bidding at the expense of the will of the people and the common good. And, hypocritically, the left cheers it on.

Many of us think that what these corporate giants are doing is bad for representative democracy and self-government. But they have a right to do it. And yet, they want to deny the rights of bakers, florists, photographers, adoption agencies, and marriage counselors who only want the same liberty to follow their conscience.

Big business is using its market freedom to deny small businesses and charities their religious freedom. The hypocrisy is astounding.

Take the cases of Bruce Springsteen and Bryan Adams. They said their consciences require them to deny their artistic gifts and talents to citizens of states that have enacted policy they disagreed with. And, of course, they have that right.

Adams wrote: “I cannot in good conscience perform in a state where certain people are being denied their civil rights.”

He’s wrong about the laws—they don’t deny anyone civil rights. Instead, they protect civil rights. They protect religious freedom, which, as the liberal American Civil Liberties Union (ACLU) once acknowledged, is a civil liberty.

So Springsteen and Adams are exercising their freedom of conscience by boycotting states that sought to protect the consciences of adoption agencies, religious schools, bakers, and florists. Do they not see the hypocrisy?

Finally, if these boycotts are really a matter of principle—and not just grandstanding—then why do so many of these same companies do business in foreign countries with terrible records on human rights in general, and for LGBT people in particular?

The governor of North Carolina, Pat McCrory, pointed out this hypocrisy. After New York Governor Andrew Cuomo issued a travel ban for state employees to North Carolina, Gov. McCrory asked how it was consistent with Gov. Cuomo’s trip to Cuba—with state business leaders—to promote trade with that country.

Is Cuba better on human rights than North Carolina? Or is Cuomo being a bit hypocritical?

Others have pointed out the hypocrisy of PayPal. The CEO of PayPal announced that the company wouldn’t expand in North Carolina because of “PayPal’s deepest values and our strong belief that every person has the right to be treated equally, and with dignity and respect.”

Then PayPal might want to explain why its international headquarters are in Singapore, where people engaged in private consensual same-sex acts can face two years in jail. It might also want to explain why it announced in 2012 that it would open offices in the United Arab Emirates (UAE). While North Carolina placed some commonsense limits on public bathrooms, the UAE reportedly jails gay and transgender people.

The left knows it can’t win on the merits in the debate about religious freedom and bathroom privacy. These bills enjoy strong public support—that’s why elected representatives are voting to pass them. And it’s why corporate elites have to target governors to veto them.

Missouri is likely the next state to move a religious freedom bill, and we can expect the same cast of characters to come out in opposition. But this time, the left and big business are entering the debate with one big disadvantage—they’ve been beaten. Gov. Phil Bryant of Mississippi and Gov. Pat McCrory of North Carolina have stood up to the bullies and shattered their aura of invincibility.