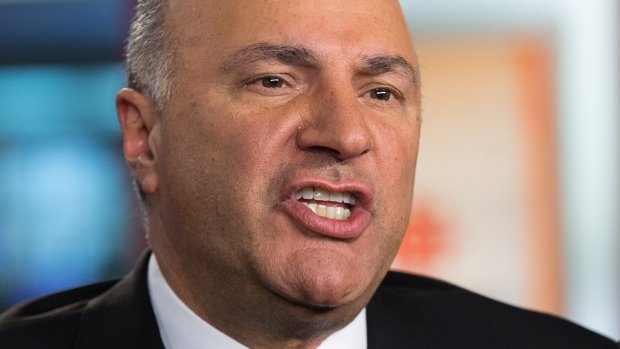 February 15, 2017 (TheBridgehead) — I first heard of Kevin O’Leary the way most others did: as a reality TV show star on Dragon’s Den, a sort of business talent show in which O’Leary performed the role of Simon Cowell, cracking down on the many stupid peasants that wandered into his crosshairs with their simplistic plans to make money. But O’Leary is now back in the headlines, having recently decided after much reality show fanfare to run for the leadership of the Conservative Party of Canada. If he was the Simon Cowell to Dragon’s Den, he’s the new Belinda Stronach to the Conservative Party. He’s not particularly interested in the grunt work of politics, but he’s very interested in parachuting into the potential position of Prime Minister.

Many Conservatives (and a few conservatives) seem to be falling for it. After the leadership debate in Halifax, his hospitality suite was packed with fans while many of the other candidates waited around for people to show up. He has name recognition where most of the candidates barely register. Some polls show him already leading the pack, riding high on his take-no-prisoners style of speaking and celebrity status. And that’s why many love him, too—a repairman who came to my house the other day told me he’d donated to Kevin O’Leary, and when I asked him why, he told me he didn’t know anything about O’Leary except that he seemed like he could “beat Trudeau.” If the Liberals could win with a celebrity, some seem to think, maybe the Conservatives could borrow one and win, too. With left-wing politicians like Rachel Notley and Patrick Brown promising carbon taxes across the country as people feel the pinch, voters are getting impatient.

For social conservatives, of course, Kevin O’Leary is a disaster. Just in case anyone was unclear as to how much he doesn’t care about social issues, he informed Ezra Levant, “I don’t care if you want to marry a goat, I’m for it.” He told CTV that he was a “feminist” who supports LGBT rights, euthanasia, and Canada’s current no-holds-barred, legal-throughout-all-nine-months abortion free-for-all. In fact, at the leadership debate in Montreal this week, O’Leary decisively declared war on the Conservative Party’s so-con wing and announced that it was time to move on from those voters who still cared about such trivialities as the family and the fate of children in the womb: “LBGTQI: done; marijuana: done; reproductive rights: 100 percent. Get used to it. That is the definition of the Conservative Party going forward.”

The threat Kevin O’Leary poses to the Conservative Party as a home for social conservatives is imminent and existential. We simply have no place in his party, and he has said so in as many words. Bluntly put, any of the other candidates is better, because most of them will at least allow members of caucus to put forward motions and legislation on the issues they care most about as well as permit votes of conscience. And if you thought Stephen Harper’s grip on his caucus was bad, imagine what a man with no political experience and a man used to cutthroat and carpetbagging business practices will do? Kevin O’Leary does not strike me as the sort of man who tolerates dissent, and based on his interviews and his reality show stints, he doesn’t even like being responded to.

Some Conservatives seem to be so frazzled by the possibility of Justin Trudeau winning re-election that they are willing to run another liberal to beat him. He may not be conservative on anything but tax cuts, and his belief in those may be based on nothing more than his own self-confessed worship of the almighty dollar, but at least he can beat Trudeau. Which would leave a lot of Canadians with no party to vote for, resulting in a lot of Canadians looking for some Reform Party-type alternative. Kevin O’Leary will not lead the Conservative Party. He will remake it.

Small-c conservatives should be a lot more concerned about O’Leary than they are. He’s generating excitement, and the Trump phenomenon should have warned us that name recognition, bombast, and promises to fatten the shrinking wallets of the everyman can be very, very effective. The economic malaise brought on by rich politicians pillaging the bank accounts of financially struggling citizens to change the climate and tilt at windmills is just beginning to be felt, and Justin Trudeau’s hugs aren’t always going to work on sobbing Canadians on the verge of bankruptcy. Tears turn to anger eventually, and then the pendulum swings. And those social conservatives who look at Trump’s overtures to the American pro-life movement and convince themselves that O’Leary might be alright need to pull their heads out of the sand. Trump spent a great deal of time trying to convince so-cons he was on their team, and appointed a horde of so-cons to various prominent positions to follow through. O’Leary is promising quite the opposite, and there is not a single good reason to disbelieve him.