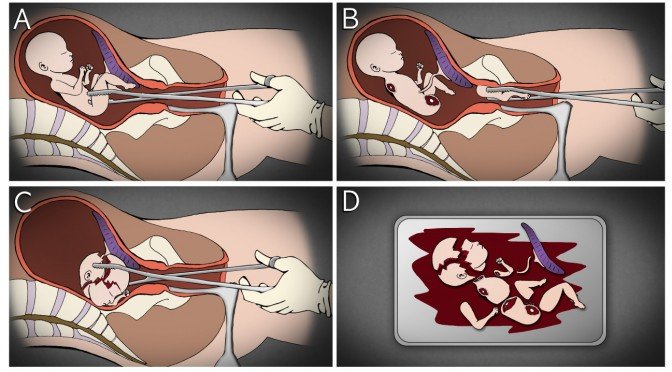 March 14, 2016 (LiveActionNews) — Torture has been in the news lately. Last month, GOP front runner Donald Trump pledged to inflict “a hell of a lot worse than waterboarding” on suspected terrorists.

While Trump didn’t specify what tactics he would use, a report in 2014 detailed ones the CIA has employed in the past. They included mock executions, long term sleep deprivation, exposure to cold temperatures, and “rectal feeding,” with at least one person dying during an interrogation.

There were limits, though. For example, intelligence personnel never subjected anyone to dismemberment. In America, that’s reserved for children.

Research by Dr. Kanwaljeet Anand at the University of Tennessee demonstrates a fetus can feel pain by 20 weeks (other research indicates pain can be felt as early as 5.5 weeks). From 13 weeks on, abortions often involve a technique known as dilation and evacuation (D&E). Dr. Anthony Levatino has performed over 1200 abortions, and in the video below, he describes what a D&E consists of.

After the amniotic fluid is removed, the abortionist uses a sopher clamp — a grasping instrument with rows of sharp “teeth” — to grasp and pull the baby’s arms and legs, tearing the limbs from the child’s body. The abortionist continues to grasp intestines, spine, heart, lungs, and any other limbs or body parts. The most difficult part of the procedure is usually finding, grasping and crushing the baby’s head. After removing pieces of the child’s skull, the abortionist uses a curette to scrape the uterus and remove the placenta and any remaining parts of the baby.

There are currently 162 facilities in the U.S. that perform abortions past 20 weeks. Forty will perform them after 24 weeks while some, like Southwestern Women’s Options, will do them after 28 weeks.

Eighteen late-term abortion facilities are owned by Planned Parenthood, the recipient of more than half a billion dollars in federal funding. The group’s Senior Director of Medical Services, Dr. Deborah Nucatola, herself does abortions at up to 24 weeks. In footage released last year by the Center for Medical Progress, Dr. Nucatola explained how she can abort a baby while still preserving the organs for research:

We’ve been very good at getting heart, lung, liver, because we know that, so I’m not gonna crush that part, I’m gonna basically crush below, I’m gonna crush above, and I’m gonna see if I can get it all intact.

And although former Secretary of State Hillary Clinton claims late-term abortions only happen “because of medical necessity,” that just isn’t the case. It certainly wasn’t why Gary Cross had Planned Parenthood set one up for his 13-year-old stepdaughter.

Cross brought the girl there after her mother noticed that she was gaining weight. Rather than contact authorities, Planned Parenthood arranged for her to have an abortion at 20 weeks, thus allowing the fact that Cross had raped her to stay hidden.

When it was revealed the CIA had operated secret prisons where terrorism suspects were treated harshly, an uproar followed. In contrast, the abortion industry can run 162 sites where children are literally pulled apart with little outrage. That needs to change.

At a Republican debate in February, the candidates disagreed over what they would define as “torture.” While we can argue about the definition, one thing should be clear: if dismemberment doesn’t fall under it, then it’s hard to imagine what does.