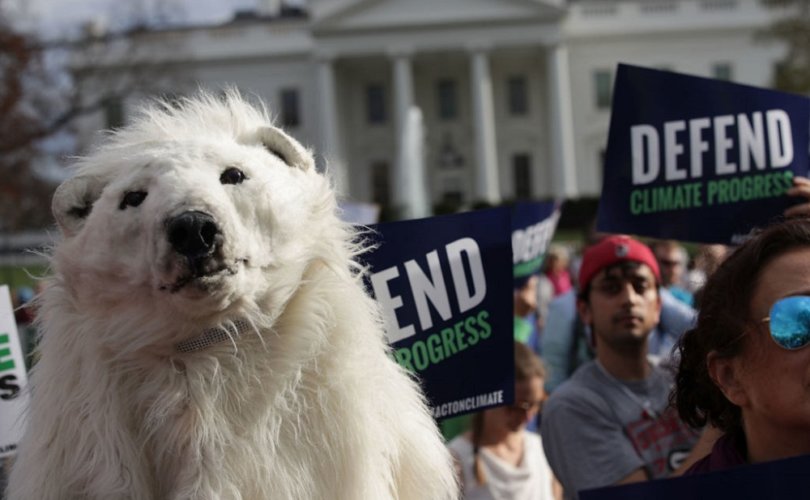 December 10, 2019 (American Thinker) — What wets your whistle? It's another day and another dire warning from the U.N. Of course, almost 100% of the media repeat these dire warnings in order to indoctrinate the public, especially the young, with no questions asked as the media pretend they are fact-checkers.

Somehow, these supposedly educated journalists never point out how wrong previous predictions have been, but the solution is always to transfer freedom and trillions of dollars to bureaucrats and politicians throughout the world.

Today, we have only a few years left, and the cost has gone up substantially. Is it any wonder that the birth rate is so low when most of the people pushing the climate catastrophe crap also support abortion on demand at any stage of the pregnancy and we are told that humans are destroying the Earth, and they are going to die soon anyway, so why bring children into the world?

U.N. Chief Warns “Point of No Return” on Climate Change “Is in Sight”

U.N. Secretary-General Antonio Guterres isn't mincing words when it comes to issuing a dire warning about the global climate crisis, saying that the effort to stop climate change has been “utterly inadequate.”

In 1989, the U.N. also warned that we had only a few years left, and journalists, like puppets without a brain, just repeated the warnings with no questions asked.

A senior U.N. environmental official says entire nations could be wiped off the face of the Earth by rising sea levels if the global warming trend is not reversed by the year 2000[.]

In 1970, we were all going to die soon from global cooling, and journalists, like puppets without a brain, just repeated the garbage with no questions asked.

18 spectacularly wrong predictions made around the time of the first Earth Day in 1970, expect more this year

The dire warnings to scare the kids and public have been going on for at least 97 years, and as always, journalists just repeat the fear with no questions asked.

The Arctic Ocean is warming up, icebergs are growing scarcer, and in some places the seals are finding the water too hot. Reports from fishermen, seal hunters, and explorers all point to a radical change in climate conditions and hitherto unheard-of temperatures in the Arctic zone. Exploration expeditions report that scarcely any ice has been met as far north as 81 degrees 29 minutes. Within a few years it is predicted that due to the ice melt the sea will rise and make most coastal cities uninhabitable.” — from an Associated Press report published in The Washington Post on Nov. 2, 1922.

It would be much easier and cheaper if the 1922 article were continually rerun, as the predictions and warnings are essentially the same.

Here is an easy question for those who push the indoctrination on the climate: how did the catastrophic warnings go from global warming in 1922 to global cooling in 1970 if rising CO2, the rapidly increasing population, and an exponential rise in fossil fuel use cause warming?

Journalists are worthless if they just push policies with no questions asked. In 1922, it was global warming; in 1970, it was global cooling. In 1989, it was global warming again, and then it changed to climate change. Then that wasn't enough, so it has evolved into climate disaster, climate catastrophe, and an existential threat greater than terrorism. Politicians are obviously poll-testing to see what scares people the most.

The climate, through billions of years, has always changed cyclically and naturally yet those of us who truthfully state this are called stupid, anti-science and deniers. The purpose of calling us stupid and deniers is to discourage questions and debate, especially among the young. Not asking questions breeds stupidity. Journalists are major contributors to the breeding of stupidity because they not only won't ask questions, they stifle the speech of those who do.

The purpose of breeding stupidity is to make people willing to hand over money, freedom and power to greedy politicians and make a greater share of people dependent on government for everything and that is the Democrats' goal.

The greater existential threat to our freedom, democracy and prosperity is indoctrination on climate change, not climate change itself.