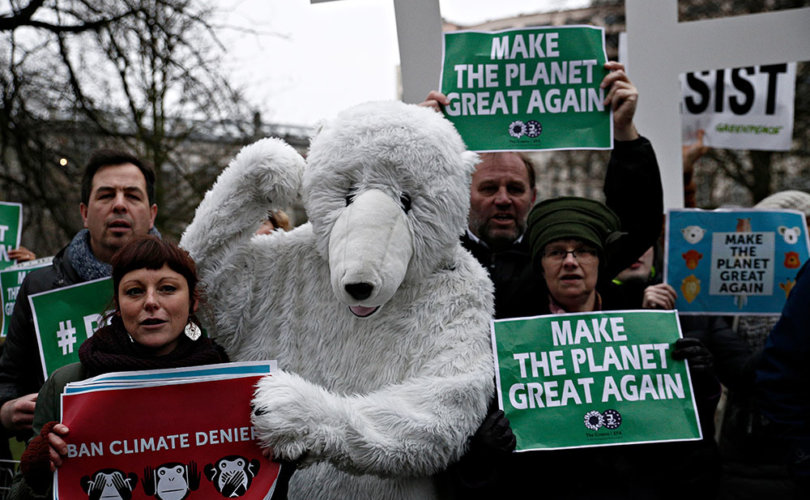 This article was originally published November 16, 2019 on American Thinker and is published on LifeSite with permission.

November 22, 2019 (LifeSiteNews) – In early May 2017, Hillary Clinton declared herself “an activist citizen and part of what she called The Resistance.  Later that month, May 17, 2017, she officially launched a “political organization aimed at funding 'resistance' groups” to oppose and undermine the president.  As early as June 2, 2016, Hillary had been questioning President Trump's “fitness to lead” and given a “tour-de-force assault on his record,” calling him “too dangerous and unstable” to be president.  She has spent the past three years declaring herself the real winner of the 2016 election and attacking the president's fitness for office.  Looking at her pitiful illusions in multiple interviews, her recent book, and her desperate quest for the presidency, it's not hard to guess what drives her compulsion to lead what she calls “The Resistance.”

Various other Democrats­ — Elizabeth Warren, Ben Cardin, Dick Durbin, Maxine Waters, and others — began talking (December 2016), and haven't stopped since, about undoing the results of the election, actually using the word “impeachment,” before the inauguration.  Vanity Fair asked shortly after the election, “Will Trump Be Impeached?,” and Politico in April asked how soon impeachment could take place.  This unprecedented resistance-impeachment movement gained full-bore momentum when House speaker Nancy Pelosi announced that Democrats would impeach Trump because we “can't let him 'win' reelection.”  It became obvious that the fear of Trump's re-election was driving the 79-year-old speaker's risky and questionable strategy.

The impeachment circus on the Hill, led by the shifty Rep. Adam B. Schiff, is nothing more than a last-ditch effort by The Resistance to have the media declare their do-over efforts a “win” with what they hope will be a knock-out victory.  They are putting America through this “show trial” so the Democrats with the help of their media allies can, at least, wound Trump sufficiently among enough ill informed sound-bite voters to enable them to “win” the election they lost in 2016.

In addition to the lost productivity of a House devoting all its energy and time to undermining the president, what else is at stake when a major political party refuses to accept the results of an election and devotes itself exclusively to “resistance” instead?  Much has been written about the sham of the Schiff-style impeachment.  Among the best assessments are those provided by Victor Davis Hanson, who gives ten compelling reasons why impeachment is illegitimate and another ten reasons why impeachment is really a coup.

An often overlooked question is what happens after this circus is over.  Clearly, the Democrats have control of the House, and they can impeach, as they obviously are determined to do.  So what's next?  After the “victory,” what are the spoils?  Aside from retaining her tenuous grasp on power a short while longer, what can Pelosi at her age hope to accomplish if her frantic attempts to tarnish Trump succeed enough that he fails to win re-election, thereby protecting her momentarily from Rep. Alexandria Ocasio-Cortez and the rest of the radicals on one side and the ambitious Schiff on the other?

Many commentators have been and continue to be concerned about the Democrats' lack of a positive agenda, asserting that the only thing holding the party together is its “anger” at Trump.  With the lack of a coherent message or identifiable policy agenda, the leaders of the party, Pelosi in particular, have let extremists become the face and voice of the party.  Indeed, there is growing concern that the Democratic Party is now the party of socialism.  The eminent historian Hanson, who unlike some of today's “experts” has a firm grasp on the lessons of the past, has written brilliant and definitive analyses showing that socialism is “not the cure,” that it “guarantees failure and suffering,” that it breeds authoritarianism, and that it goes hand in hand with willful ignorance of both past and present examples of the tragic results where it has been imposed.  In short, socialism is growing in the ashes of the Democratic Party.

If we suppose that the Democrats win their pyrrhic impeachment victory in the House, there is no way the Republican-controlled Senate will remove President Trump.  Unless the elites blind enough low-information voters with their pixie-dust promises of big government providing for all of their wants and needs, Trump will go on to win re-election in 2020.  Even if Pelosi manages to add the president's name among former impeached presidents, his policy accomplishments will far overshadow the hollow partisan footnote the Democrats are trying to inflict.  The Democrats will likely lose control of the House and be left with nothing — having destroyed their own party, undermined the president, and weakened trust in government.

Many knowledgeable Americans agree with Hanson that the 2020 election boils down to a “stark choice between a revolutionary future versus American traditionalism.”  If the Resistance wins, the future of America does indeed come down to that stark choice in 2020, whether the Democrat candidate is Hillary or one of the current lackluster contenders.

Pelosi has a history of being a skilled organizer and fundraiser.  She rose to her position of leadership not without being shrewd.  But how can she not see the implications of letting the resistance movement trample American procedures and precedents?  How can she not see the divisive effects of identity politics?  How can the Democrats not recognize that they are destroying any sense of community and common allegiance to our country?  How can they not see what socialism has done in Cuba and Venezuela?  Why is Pelosi allowing the Democrats to take such a high-risk path?  Is the exhilaration of a few more days of power worth trashing the Constitution?  Are these tragic outcomes for the nation worth her having a few more appearances on television and a few more minutes in the limelight?

It is possible that the once shrewd speaker has been so overwhelmed by Trump derangement syndrome that she cannot see beyond her hatred of the man.  Alternatively, she may be thinking only of survival.  It is probably a safe bet that the Deep State holdovers in the Justice Department and intelligence bureaucracy have kept her well informed as to what prosecutor John H. Durham and Attorney General William Barr have discovered about the lawlessness of her party in the 2016 election and all the details and indictments that are about to be unleashed.  Perhaps she has no love for the radical agenda that has overtaken her party, but is simply pedaling as hard as she can to outrun the hounds of justice closing in on much of establishment Washington.